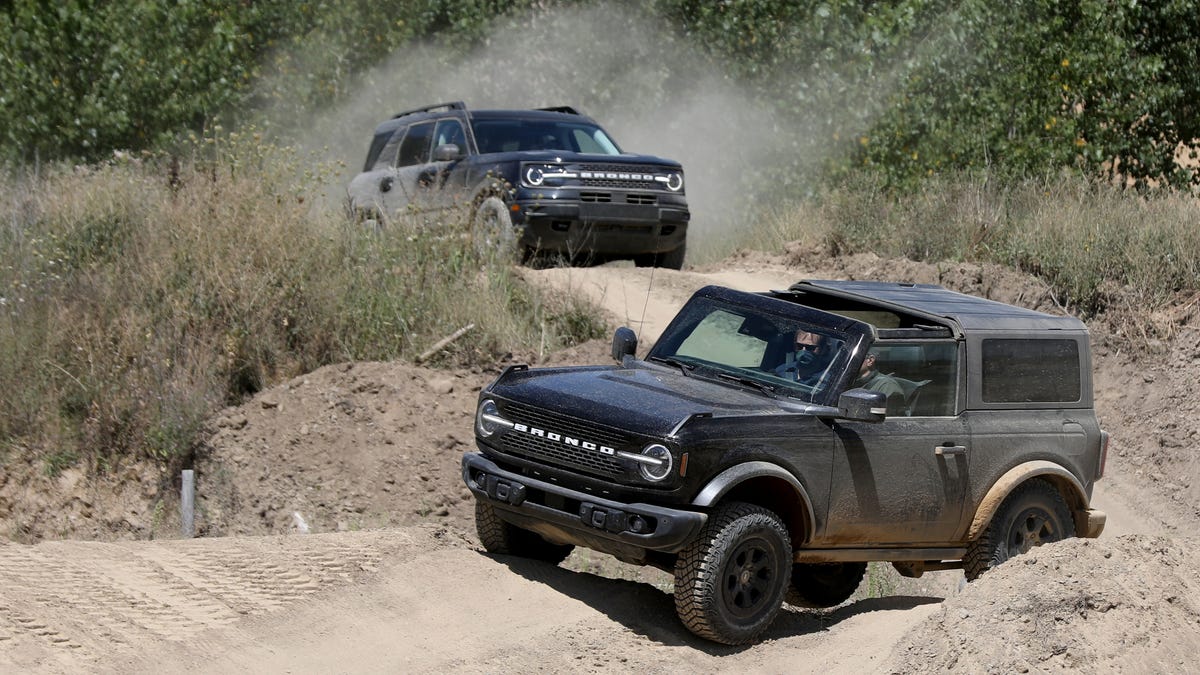 | Detroit Free Press
2021 Ford Bronco will chase Jeep Wrangler in sales after releaseWith their new Bronco, Ford has made it clear the company plans to go after the market dominated by the Jeep Wrangler.The auto industry is fending off disruption from COVID-19 again.Ford confirmed Friday that customer delivery of its all-new Bronco will be delayed.”The all-new Bronco two-door and four-door customer deliveries will begin in the summer rather than the spring due to COVID-related challenges our suppliers are experiencing,” Jiyan Cadiz, Bronco communications manager, told the Free Press, part of the USA TODAY Network.”Reservation holders will be notified their orders will now be starting in mid-January instead of Monday, Dec. 7,” he said. “Reservation holders now have until March 19 to finalize their dealer selection, place their order and agree to the selling price.”Car recall: Kia recalling nearly 295,000 vehicles due to engine fire risk, including select Sorento, Soul SUVsIs the car owner’s manual history?: 2021 Ford F-150 ditches traditional paper copyThat means, specifically, reservations may go to the dealer they’ve chosen and start officially choosing specifications of the Bronco they want and putting deposits down. Right now, reservations have been placed with $100 deposits only.Cadiz said the Sasquatch package with a manual transmission will now move to a 2022 model year rather than a 2021 model year. It was already planned for later in the year but now it’s pushed back. There is no specific timing on delivery of the manual transmission at this time.Disappointing delayFord and its Bronco fans have been counting the minutes until delivery.”Look, from the day that Ford said, ‘We’re bringing the Bronco back,’ the world went nuts. They delivered a vehicle that looks terrific and the world went nuts again. They’ve got all these orders, very high expectations and now, delay,” said John McElroy, host of “Autoline After Hours” and veteran industry observer.Ford declined to comment on whether the supply chain problems would impact other launches or production in general. Ford also declined to say what part of the supply chain was disrupted as it related to Bronco.”This is total deflation. It’s going to be disappointing for everybody. They’re going to get the revenue anyway (at Ford), but it sure would be nice to start booking it right now,” McElroy said. “And if it’s affecting this launch, what about the Mach-E or F-Series?”Supply chain worriesJeoff Burris, the founder of Plymouth, Michigan-based Advanced Purchasing Dynamics, a supply chain consultant to auto suppliers primarily in North America, said the industry is bracing for new problems caused by the coronavirus.”It’s not a surprise. I’ve been hearing stories for the last few months about continued supplier disruption due to COVID issues and auto manufacturers having to deploy resources into supplier facilities,” he said. “They’ll supply purchasing, quality and engineering people to suppliers to help manage the situation.”But clearly, the current issues are overwhelming and devastating for a company with a new CEO who is eager to meet customer demand and Wall Street expectations.”It’s a big deal,” Burris said. “It’s letting air out of a positive marketing balloon. Ford is on a roll from a brand standpoint with the Mustang Mach-E and the Bronco. The cost of having an assembly line off line and not being productive is huge, in the millions.”Will GM, Toyota have delays, too? Michelle Krebs, an executive analyst at Autotrader, said Ford is not alone in feeling pain.”We have seen problems with the supply chain due to the pandemic that have slowed and even forced the halt of production, so this comes as no surprise,” she said. “It is not catastrophic. It is understandable.”She pointed to General Motors shutting down Corvette production and said Toyota has had problems with its truck plants. “It’s happening across the board,” Krebs said. “Ford has done better than most getting back up to speed. It’s frankly shocking the supply chain has held up as well as it has.”The auto industry shut down from March to May at the start of the COVID-19 crisis.Bronco Nation reactionJeff King, vice president and general manager of Bozard Ford Lincoln in St. Augustine, Florida, had just returned from birthday golf to discover the Bronco news.”I’m not freaked out over it,” King told the Free Press. “I wish it didn’t happen but we’re going to be OK. And it’ll be great when it gets here.”Ford notified dealers via email just after 4 p.m. on Friday, he said.Across the country in California, Mark Brooks said he was grateful for the heads-up.Transparency from the company is always good, he said. Bronco communication from Ford in the past has had “hiccups” and enthusiasts appreciate knowing that their constructive criticism for more information more quickly is heard. He noted exchanges on Twitter, Instagram, Facebook and Bronco Nation board sites late Friday.”I got my reservation back in July,” said Brooks, 50, a credit union manager from Sacramento. “I’ve been on pins and needles since.”A lot of changes have unfolded in recent months, he said. “We waited this long. I’m bummed. But it’s not the end of the world.”For now, he’ll plan to drive his 2016 Ford Mustang through the summer of 2021 and plans to order the new Bronco in Velocity Blue.”I’m sure it’s going to be worth the wait,” Brooks said.Contact Phoebe Wall Howard: 313-222-6512 or phoward@freepress.com. Follow her on Twitter @phoebesaid. Read more on Ford and sign up for our autos newsletter.