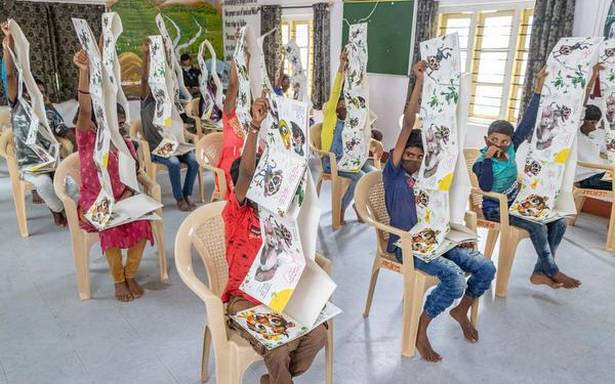 Around 5,000 children living close to the Western Ghats in Karnataka have a new book to read and learn from. The picture-story book Will You Play With Me? featuring endangered wild animals of the Western Ghats has been created solely to distribute among children of the region to create understanding and empathy towards animals.The bilingual book (in Kannada and English) came together when Krithi K Karanth, chief conservation scientist and director of the Centre for Wildlife Studies, and Raghava KK, an artist, received grants from National Geographic to create a book on the endangered wildlife species in the Western Ghats. They collaborated with Kokaachi, an independent storytelling studio based in Kochi, to bring out the book.The interactive book contains pull-out masks of lion-tailed macaque, elephant, and tiger, says Tina Thomas, co-founder of Kokaachi. Other animals featured in the book are dholes, gliding frogs, langurs, gaur and hornbills.The story by Netra Srikanth was adapted by Tina, which was then translated to Kannada by K Ullas Karanth, a conservation zoologist. The animals are illustrated by Raghava and the scenery, typography and publication design are by illustrator Prabha Mallya.The book is shaped like an accordion, which will make it interesting to the students, observes Tina. “We designed the book as a dual narrative to make it engaging for the children. In the first story line, the masks remain inside the book, but when the children pull the masks out, a second story is revealed. The masks enable the children to take on the persona of the animals, and thus become a part of their world,” says Tina.“Though the children live close to the Western Ghats, not many are aware of species endemic to the region. The book would pique their interest in them,” says Tina. The first edition, published by Kokaachi, was distributed by the Centre for Wildlife Studies for free. .The second edition has gone to print. The creators plan on including other languages such as Malayalam, Tamil and Marathi to benefit more children.

Calendars for a cause
Check out these calendars featuring rescue animals for the year 2021
To Top
error: Content is protected !!
Top