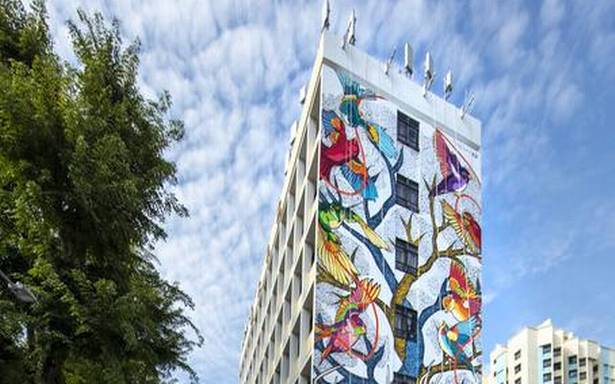 Branches of a tree entwine to form an interconnected pathway on which are perched sparrows — in blues, oranges, and pinks — that embody the spirit of freedom. In the backdrop are a few windows suggestive of an urban landscape; a couple of deer stand in front of this celebratory scene almost as if guarding a pocket of happiness and festivity. They represent one of the most common elements seen in India’s Gond art culture. A red ribbon that runs across, ties them all together. Thus, on a 21 x 10 metre concrete facade, Nature celebrates its little dance.Singapore’s Little India is not alien to street art, but it now houses a facet of traditional Indian art through an unusual mural titled Dancing in Unison. Sprawled across the wall of Broadway Hotel, the mural — a colourful amalgamation of the traditional and contemporary — brought together celebrated Gond artist and Padma Shri-awardee Bhajju Shyam and Singaporean visual artist Sam Lo in an unprecedented fashion: through multiple Zoom calls and back-and-forths.

As a testament to COVID-19 pushing the boundaries of the art world, what was supposed to be an on-ground collaboration was restricted to the digital media, with Bhajju sending over reference sketches as Sam painted the facade in Singapore. The mural, heavy with motifs of Nature and its fauna, unveiled last week by St+art India Foundation and Singapore Tourism Board (STB), also marked the start of Artwalk 2021, the annual public art festival of Little India with the theme: In Spite Of. This is not the first time that STB is collaborating with St+art India: first in 2017, in the public art district of Sassoon Docks, Mumbai, and subsequently in Delhi’s Lodhi district where Sam and Bhajju collaborated for the first time. Crossing boundaries“Artwalk 2021 proved to be a canvas for us to come together again. We wanted to bring a little bit of India into Singapore. What better place to do it in than Little India which has a very strong historical link to India,” says Raymond Lim, area director, STB, in a joint interview with curator and co-founder of St+art India, Giulia Ambrogi, who joins from Berlin, Germany. “In spite of the distance and boundaries, and in this unusual situation, we have been able to think through and understand how we can cross these boundaries. We wanted to bring an artform that is very well known in India but perhaps not so known abroad, like Gond art,” she says, adding, in terms of visibility, scale and positioning in the urban fabric, the Broadway Hotel facade was the perfect canvas because unlike other walls in Little India, this was broad and, coincidentally, very close to an Indian restaurant. “The process that went into shaping a mural conceptualised by two artistes across countries was the most eye-opening,” Giulia says.

“We are lucky to be living in a time where the Internet is accessible because I have not had the opportunity to meet Sam. So, without technology this would not have been possible,” says Bhajju, who was born and raised in the village of Patangarh, Madhya Pradesh, which is home to the indigenous Gond Pradhan tribe. Sam says that this project was a learning experience. “Although it was intimidating at first, to be working with such a highly respected artist representing such a significant cultural art form… it really helped that Bhajju exuded such an ease of manner. In the end, this experience really represents hope and a spirit of possibility,” they add.This was the first time that Sam has taken someone else’s work to a wall. They recall, “It was one thing to have to take artwork that was created entirely on paper with paints and pigments and put it on a 21 x 10 metre wall by hand, but it was a whole other ball game figuring out the appropriate technique to re-create the use of stippling and short brush strokes in Gond art using my medium of spray paints.” While Bhajju says that though he has previously experimented with large format works in Gond art, translating his work to a wall of this scale was a first. “I had seen Sam’s work at the Lodhi Art District in Delhi, and noticed similarities in our practice in terms of the subjects we choose. In this mural, we saw the tree (done in Gond art) as the focal point and developed other elements around it,” says Bajju. In the Gond art tradition, each of the elements in Nature — be it a hill, river or tree — is believed to be inhabited by a spirit, and is consequently sacred. And so, natural elements are recurrent motifs. According to Bhajju, collaborations like these introduce an element of contemporaneity to Gond art. “It acts as a form of preserving the gods we worship and our Adivasi stories and practices,” he says, adding that he has been seeing a greater engagement in the last decade. “People have been wanting our art in their homes and private collections, which is encouraging.”