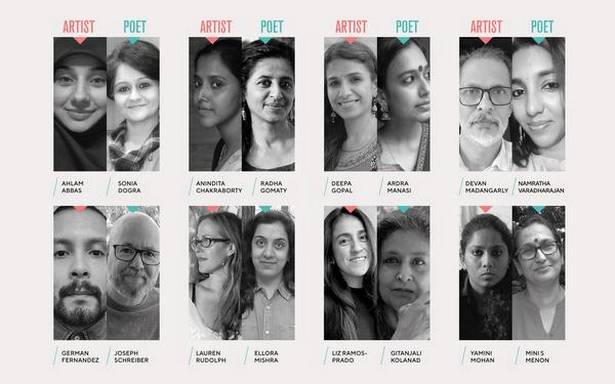 Poetry segues into visual art at Ignite — From Within The Confines, a virtual exhibition curated by Dubai-based visual art blogger Deepa Gopal. Eight visual artists and eight poets from across the world collaborated on the project in pairs — the poet had to find inspiration in the works of the visual artist they were paired with. A culmination of work, which started in September, the show will feature 40 artworks and 40 poems, from November 4 to 12.“It brings together art and poetry from different parts of the world in the form of videos, poem recitals and texts, through a blog, Instagram and YouTube. It is amusing to see how the pairings ignited new amalgamations, conversations and creative symphonies,” Deepa adds.

The visual artists are Anindita Chakraborty (Hyderabad), Devan Madangarly (Kerala), Yamini Mohan (Dubai), Ahlam Abbas (Beirut), German Fernandez (Peruvian, based in Dubai), Lauren Rudolph (New York), another Peruvian Liz Ramos-Prado (London) and Deepa herself. The poets are Ardra Manasi (Manhattan), Mini S Menon (Kerala), Radha Gomaty (Kerala), Ellora Mishra (The Hague), Gitanjali Kolanad (Toronto), Joseph Schreiber (Calgary), Namratha Varadharajan (Bengaluru) and Sonia Dogra (Delhi).The exhibition focusses on creativity borne out of this pandemic, the reactions and responses to the current state we are in — restricted, isolated and confined. “It’s a ‘conversation’ of the ‘creatives’ trying to overcome, find joy in, forget, annihilate, reveal and/or excel at their current life and state of matters that they are surrounded by in their daily life. All the same, Ignite — From Within the Confines essentially instils hope,” says Deepa.Excerpts from an e-mail interview.What led you to curate this show? The objective is simple; I wanted to promote art and poetry, and I was particularly interested in the collaboration. It was experimental and to my surprise, most artistes were as excited as I was when I reached out.This was one of my pet projects; I had been thinking of such a collaboration for some time. When everything turned online, I saw the possibility of such a show.How did you get these artists together? Have you worked with them before? I knew most of them for a long time and have been following their works. I have also worked/participated with a few of them before like German, Ahlam, Liz and Devan sir. German and Ahlam were part of my earlier show, Repercussions, which I curated in 2016 at Durbar Hall, Kochi. I checked with a couple of artist/poet friends regarding the works they did since the pandemic. I got in touch with them, and most of them were immediately on board.How open were the artists, to working within the ‘confines’ of a theme? I don’t think they gave a second thought about the ‘confines’ since all of them were creating/writing during this time, venting using various forms of expression; not necessarily speaking about the pandemic alone. They were in their zones tapping into their creative energy and producing works that mattered to them.When I paired them, all the poets were excited to see the works and respond. There were no restrictions other than that the poets needed to write at least one to five poems based on the respective artist’s works that I sent to them. Some of us interacted with those we were paired with, some could not and some did not (as they felt that they would be influenced and that would sway the writing).What were the challenges involved? Every day has been a learning experience for me. Bringing all participants together under one umbrella has its own challenges. Not everyone thinks alike; since the interaction was virtual, communication was difficult at times. The varying time zones added to the difficulty sometimes.The show will be inaugurated at https://ignitefromwithintheconfines.blogspot.com/ on November 4, 4 pm. The works will be posted on the following days until November 12 and be subsequently available on YouTube.