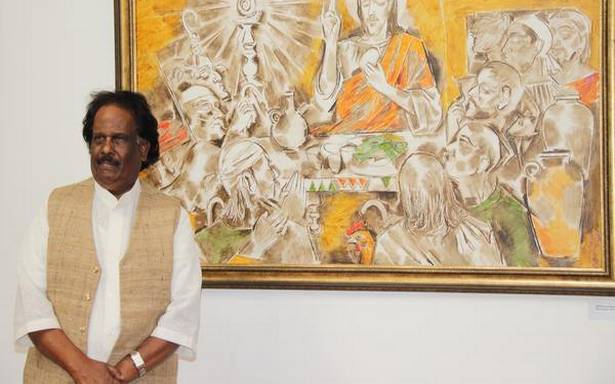 A generous teacher and influential artist, Alphonso Arul Doss who just passed away, had a mastery over oils, defining his own ‘line’ with light, time and space

With the passing of veteran artist, Alphonso Arul Doss (1939-2021) yet another star of the Madras Movement passed into the night sky. Through his lustrous paintings with their crystalline quality, diamonds polished to fire, his light will shine on all his brethren for years to come.Humanity firstWinner of numerous awards and one-man shows the world over, lifelong, he was inveterate at being human, showing care and compassion, cultivating such qualities with ostensible ease. Alphonso put empathy first, before any speech of, or brush with, artistry. His students and compatriots remember him as much for his kindness and generosity as his ability to teach. Curator and filmmaker Gita Hudson recalled, while making a film on him titled ‘Golden Flute’ — which first showed at his retrospective in 2014 at DakshinaChitra — how Alphonso would hire a cab for her crew and buy them lunch. He was Principal of the Government College of Fine Arts, Chennai from 1992 to 1997. When he visited his old school in recent years after the screening of his film, younger students who did not even know about the Madras master, crowded about him taking selfies — such was the power of his grace.Finding India through his eyes“I was always painting about light and time and space,” he once told me. Yet, as I observed in one curatorial note: It would seem as if Alphonso starts by groping in the dark, to first feel the contours of the scene by touch before he starts to try to see with his eyes. Visiting his studio, Gita was stunned to see his mastery of oils: a glowing yellow on a spick and span palette with minimal use of paint. With a fine layer he achieved a translucent luster in a canvas prolific with ochres and yellows, burnt reds and browns, colors that spoke to him of India. Like many emerging artists of his period, he had to find the Indian artist in him, whose bedrock inspiration were the European masters. Alphonso found his own path. Trained as a portrait painter, his bold yet gentle treatment of his subjects — women with effulgent oval faces and the burnished modulation of mythological heroes were brought alive in Cubist hues through his unique faceting technique. As a young artist, with his contemporary Vidyashankar Sthapathy in Kumbakonam he became drawn to temple sculptures of Krishna and Nataraja. Alphonso explored varied religious subjects: he painted Krishna with a flute and Christ’s healing hands bringing sight to a blind man. This democratic approach was consistent to the artists of the Madras Movement, whose charismatic proponent K C S Paniker depicted Christianity, Hinduism and Buddhism.The other sideAlphonso remained single. There are stories of an unrequited love in his life, after which it was said he refused to tie the knot of matrimony. “He decided not to marry women. He married art,” quips Cholamandal artist C Douglas. Perhaps Alphonso’s own personal learnings taught him the two sides of love and restraint, a response to the harsher vicissitudes of life. He was tremendously encouraging to his students and peers, critiquing them with honesty. Douglas remembers his first year at the College of Arts in 1971 when Alphonso took the class to The Kirk (St Andrews Church) where he demonstrated water colors. “It felt like the landscape you see from the train as you pass by, that kind of sensation — showing the distance, the horizon far away, more topographic.”He spoke with a special love of his Bangalore days as a young boy studying in St Joseph’s College (1945-56). Around the city, he was inspired by many statues, even Queen Victoria’s in Cubbon Park. At church, he was a choir member and altar boy. The sun shining through the stained-glass windows captured his senses, drawing him into a lifelong romance with the play of light on forms. His oil paintings are almost sculpted, as if he is scooping out material to bring an abstract three-dimensionality to flat painting. In his last days, he went back to Bangalore where he was born, to be with his relatives who were very fond of him, and they took care of him. After almost a two-month period of hospitalization, Alphonso passed away on Friday, April 23.