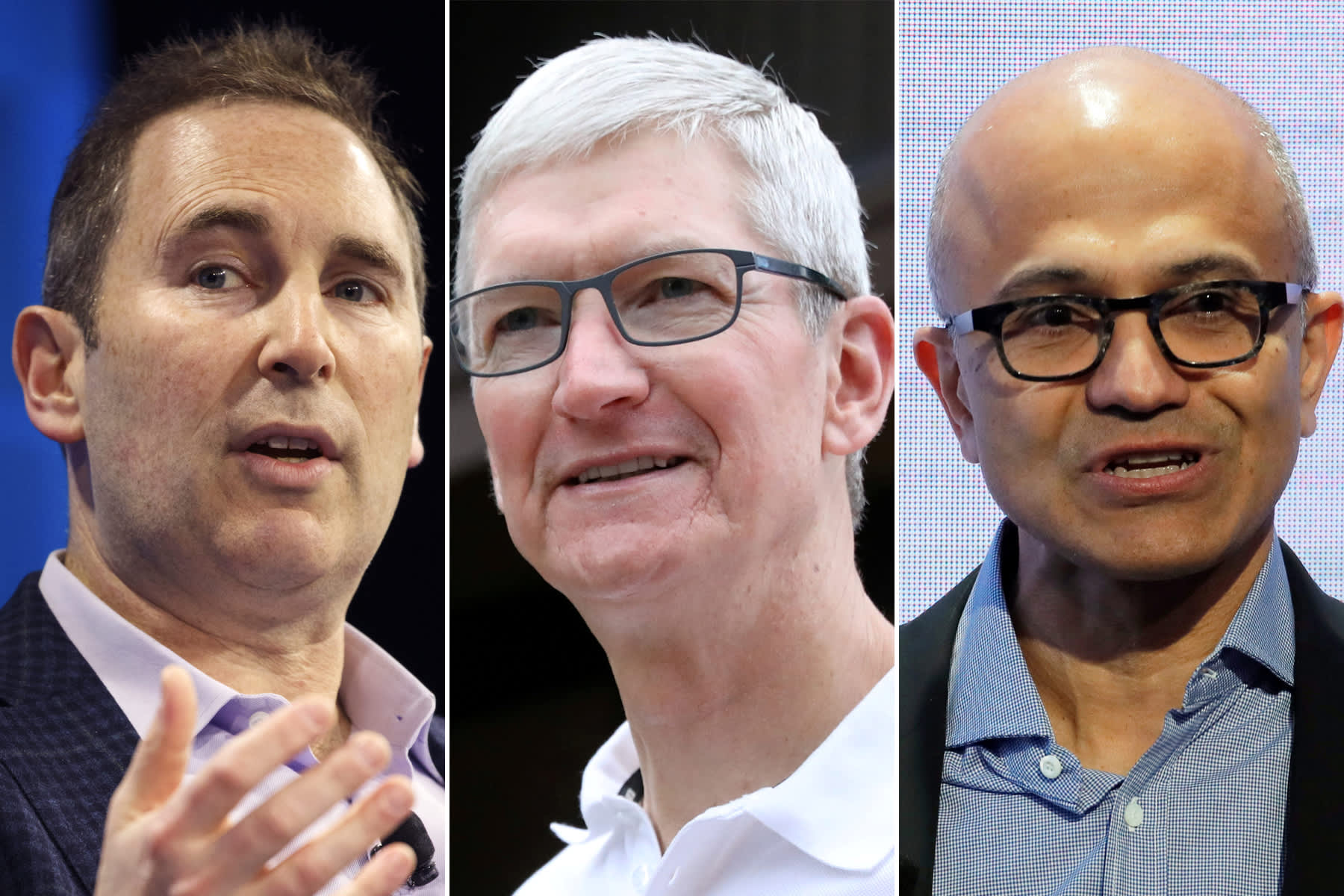 Andy Jassy (L), CEO of Amazon, Tim Cook (C), CEO of Apple and Satya Nadell, CEO of Microsoft.Getty Images (L) | Reuters (C-R)Chief executives from several major companies including Amazon, Apple and Microsoft are reportedly set to meet with President Joe Biden at the White House Wednesday to discuss cybersecurity.CNBC has confirmed that Amazon CEO Andy Jassy will be in attendance, a detail first reported by Reuters. Bloomberg said Monday Apple CEO Tim Cook and Microsoft CEO Satya Nadella will also participate.IBM CEO Arvind Krishna also plans to attend the meeting, a source familiar with the matter told CNBC. IBM declined to comment.An Apple spokesperson did not immediately respond to a request for comment. A Microsoft spokesperson deferred comment to the White House, which declined to comment on the record.The meeting comes as the Biden administration has grappled with the growing threat of cyberattacks. Microsoft was among those impacted by the SolarWinds hack that affected several government agencies, Reuters reported last year. That was just one of several recent breaches that have illuminated the urgent issues of cybersecurity. Others include the Colonial Pipeline hack and ransomware attacks that have impacted municipalities and health systems.The White House first announced Wednesday’s meeting on cybersecurity in July, which Press Secretary Jen Psaki described as “a meeting with private sector leaders to discuss how we work together to collectively improve the nation’s cybersecurity.”Google’s CEO was also invited to the meeting, according to Bloomberg. A Google spokesperson deferred comment to the White House.The meeting will also include executives outside of the tech sector, with invites including leaders of JPMorgan Chase and utility holding firm Southern Company, according to Bloomberg. Open communication with the private sector can prove particularly important in dealing with cyberattacks. After the SolarWinds hack, Microsoft President Brad Smith told lawmakers that the only reason the company knew of the extent of the attack was because computer security firm FireEye disclosed a sophisticated attack on its own systems.Since then, Sens. Mark Warner, D-Va., Marco Rubio, R-Fla., and Susan Collins, R-Maine, have introduced a bill that would require private-sector companies that work with the government or provide critical infrastructure services to disclose cyberattacks on their systems. It would also protect those companies from some possible negative impacts of reporting the breach, like being sued by shareholders using the disclosed information as evidence.—CNBC’s Jordan Novet and Kif Leswing contributed to this report.Subscribe to CNBC on YouTube.WATCH: How the massive SolarWinds hack went down