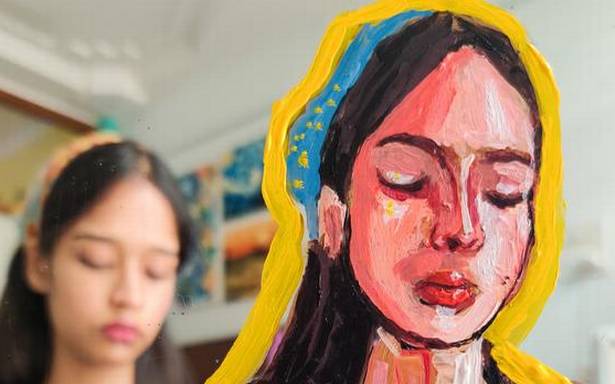 From doodling on stones to making a red sand desert out of masala powder, artists are using their creativity and readily available objects at home to create interesting work during lockdown

Nineteen-year-old Divya Baid stands in front of her mirror. Wielding a dripping paint brush and messy palette, she props up her phone to record and starts to outline her reflection on the mirror. Contours appear, colours fill in and a face slowly comes alive on the mirror: not her reflection, but a self- portrait.As procuring art supplies became increasingly difficult with intermittent lockdowns in most Indian cities, artists are adapting by making using objects available at home; being forced to be creative is also leading to engaging, quirky work. When Delhi-based freelance artist Divya ran out of canvases, she gazed around the room and was struck by the the mirror as an unusual surface. Since then, she has been experimenting: with her mirror, a random stone and even her own body. She is not alone.

Telling a story through mundane objects in the house is an experiment that is on the rise. There are two ways in which this is done: the object can be your subject and canvas, or the object becomes an integral part of a larger work. Simply put, one can draw on the object or around it. Canvas at the ready “Art has always been an escape for me,” says Divya (@thedreampalette), adding that she has painted on wine bottles, CDs, glasses, mugs and phone cases earlier. Using a mirror for canvas is a first for her.“The number of experiments I do has increased because I am almost always out of canvases,” she says. Apart from that, she says she has painted the walls of her room-cum-studio twice, already. Explaining the process, she adds: “First, I thought it would be very simple. But when I stood in front of the mirror and started outlining myself, I realised it was not easy because there was distortion. Then I had to look at the camera on the phone and paint.”While the picture suggests otherwise, the portrait is much smaller than herself. At times, when she is desperate for canvases, she also tries body painting. Another self-portrait in soothing shades of pink and brown with hints of yellow now sits on her upper thigh. Recreating artThe lockdown has also given us a slew of at-home recreations of classical paintings made by art connioseurs across the globe. For instance, a Dutch woman, Anneloes Officier (@tussenkunstenquarantaine), and her roommates recreated Johannes Vermeer’s ‘Girl With a Pearl Earring’ by using a towel, place mat and a clove of garlic, which ultimately led to California-based Getty Museum’s #GettyMuseumChallenge which gained traction from all over the world. These recreations are also set to be documented in the form of a book by the museum.Sharmla Karri (@sharmla_karri_paintings) was also out of art supplies when she decided to paint on a rolling pin from her kitchen. The self-taught artist from Visakhapatnam who specialises in oil, acrylic and charcoal painting has been eyeing surfaces at home to paint. “I started with the little bit of paint I had left during lockdown. The rolling pin idea came from that. I had also repurposed a few soda bottles to form small elements that could later be incorporated into my paintings,” says Sharmla, adding, “More than challenging, I see this process of finding things around the house to work with to be very fascinating.” Sharmla has also extensively experimented with craft over the past five months.

Her next exhibition will feature many of these works. Shamla’s baggage tags and charms, made using crochet and macrame knots, sport smaller prints of her acrylic paintings. These prints are superimposed on pieces retrieved by melting soda bottles. She is currently working on making more rolling pins and baggage tags that have attracted orders from across the country.Going with the flowFor Toronto-based copywriter Anurag Bhattacharyya (@moonchaii), discovering object art as a form of expression happened by accident. The year was 2014 and Anurag was living on her own in Delhi. “I wanted to make dinner. I opened the refrigerator and saw two eggs. I picked one up and instantly imagined the other one going, ‘Phew! That was a close call,” laughs Anurag over phone from Toronto. She immediately drew a pair of eyes on the egg to give it an expressive face. For her, object art is an outlet to the many stories that float in her mind.

Some of her other interesting works too, took form by accident. “My partner was in the kitchen and was cooking when he spilt a whole dabba of masala on the countertop. Initially, I was mad because of the mess but he later suggested that I make something with it. So I went back, cut out a camel and placed it right in the middle to replicate a camel in a red sand dessert,” she says. Similarly, when a Rooh Afza bottle broke after being dropped on the floor, Anurag pictured it as a crime scene and added a chalk outline.These are later photographed and documented on her social media handles.

“The art flows as the story does, At times, the object is the hero. At other times, what is around it is the hero. Sometimes both come together,” says the artist about her process.For the past couple of months, she has started toying with serial stories through multiple objects where her copywriting skills come in handy. Her lockdown projects also include North Korea’s Kim Jong-un in the guise of a potato. She explains, “Recently, there was a rumour that Kim Jong-un was unwell and was in a ‘vegetative state’. I read the news and when I went to the kitchen, I saw a potato lying around and couldn’t help but see his face there!”

Travel: why write when you can illustrate?
Kalakriti’s virtual exhibition celebrates contemporary women artists in India
To Top
error: Content is protected !!
Top