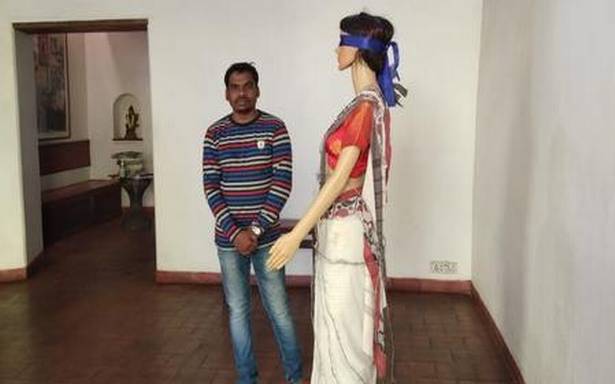 As news of the Hathras rape spread in September 2020, anger, grief and helplessness raged across the country. Men and women were united in condemning the increase of crimes against women.Telangana-based artist Maredu Ramu reacted to the news by beginning work on an installation titled My Boundary, which features a blindfolded sari-clad mannequin wrapped in barbed wire. “The woman [in my work] is now choosing this extreme way to remain safe,” says Ramu, explaining the red and yellow circles on which the installation stands, are representations of the kumkum (vermilion) and haldi (turmeric); the two symbols of a married woman in Indian society.“The application of kumkum and haldi (called pasupu) is celebrated as a symbol of protection but that is a farce,” he says, adding, “Though it hurts her, she’s safer this way, against the lecherous men she has to encounter.” He further points out that the circles could also stand for a bindi.“The circle has always been celebrated by the great artist SH Raza and more recently Bharati Kher too,” says Ramu. Ramu, who hails from Pedapally village in Telangana, did his MFA at Central University in Hyderabad. Though he works with different mediums, Ramu has expressed himself largely in acrylics of urban landscapes.My Boundary is currently on show at Kashi Art gallery in Fort Kochi and will travel to Bengaluru in mid-May and also be shown in Mumbai and New Delhi later this year.