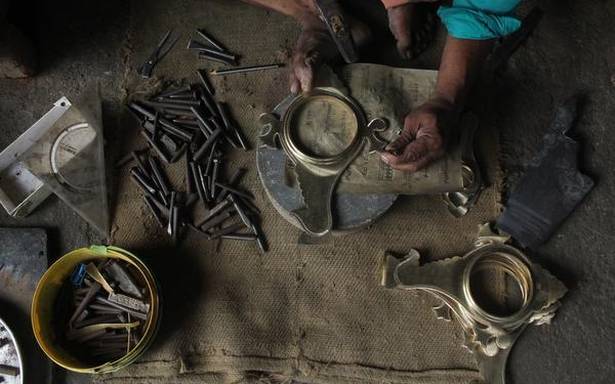 The project with designer Ayush Kasliwal was organised by the Crafts Council of India to help revive business and support the artisan community following the 2018 Kerala floods, but some artisans aren’t happy about it

Thuk-thuk-thuk-thuk falls the hammer, smoothing out imperfections in the metal disc. A higher-pitched sound draws the eye to a corner where another craftsman works on a brass frame with hammer and chisel. Deeper thuds are heard in the background, where two bigger hammers pound the soil used to cast the mirrors. This soundscape greets us as we walk into P. Gopakumar’s workshop in Aranmula, in Kerala’s Pathanamthitta district. Here, artisans fashion the famous Aranmula kannadi, the metal mirrors — the alloy is a closely guarded secret — made nowhere else in the world. On one side, another man is polishing the mirrors with water paper, a small modern intervention meant to give a shine to the metal. But tradition still rules in Aranmula — later, all the mirrors will be rubbed down with oiled sacks.Frame workIt’s the question of tradition versus innovation that has brought us here today. Gopakumar, 57, is a man of the world. He’s exhibited as far afield as Los Angeles, speaks fluent English, and is happy to chat about his foreign customers. A bit of a maverick, then, in the community of traditional artisans. And perhaps that’s what made him the natural choice to be point man for a major design intervention that now seeks to upend the canons of the Aranmula mirror, or, more specifically, its frame. The ubiquitous long-tailed brass frame — the valkannadi — and other classic designs may soon be joined by variations as part of an initiative by the Crafts Council of India (CCI), which approached one of India’s leading designers, Ayush Kasliwal, to help relaunch the craft after the devastation wrought by the 2018 floods.With moulds and tools damaged, soil washed away, and whole workshops destroyed when the Pampa flooded, the artisans reportedly endured a loss of around ₹1 crore. Struggling to recover, they have not had much help either from the State or Central governments. The most significant aid came from the U.S.-based Heritage India, which provided kits worth ₹1 lakh each to the artisans.It was then that members of CCI, led by chairperson Gita Ram, a long-time acquaintance of Gopakumar, arrived on the scene. They assessed the situation and decided that a bit of innovation might help revive business and revitalise the community. For example, says Ram, the quality of the brass used for the frames, supplied by casters from Andhra Pradesh, had deteriorated. When Ram spoke about the possibility of change, she found resistance; the artisans were “proud” and happy to stick with the tried and tested. She asked them to think about the next generation, one that may be more discerning. And that’s when she got in touch with Kasliwal, the distinguished Jaipur-based designer who has done a lot of work with metal.

New realmsKasliwal had been mulling about working with Aranmula mirrors for a long time but had been sceptical given the language barrier. But now, a visit was organised and using local interpreters, he interacted with the artisans and held sessions where they were encouraged to consider new designs. Kasliwal was enthused. “The mirrors are part of a very beautiful thing, a traditional trousseau,” he says, “But I also wanted to create products that extend to new realms.” Kasliwal and his studio have been working pro bono with Gopakumar’s workshop since August 2019, producing new designs. He excitedly describes the new models, such as the ‘Anugraham’, a simple shape in a brass frame with a hand-engraved blessing. The ‘Deepa’ has two brass frames joined together, with one containing the mirror and the other a diya or traditional lamp. When it’s lit, the mirror reflects the flame.The designs also incorporate new techniques, such as machine work and 3D printing of the brass components, with a focus on improving the quality of the brass casting. On a more visible level, there’s a new material in the mix: wood. Several models combine brass with woodwork, such as the ‘Gokha’, which is a brass-framed mirror sitting on a little wooden shelf. The ‘Kashtha’ has a wooden-framed mirror attached to a brass knob. They have also forayed into jewellery — the ‘Mudra’ is a tiny mirror set in a silver ring.Gopakumar’s workshop has been busy turning these designs into reality, and now he, Kasliwal and CCI are ready to launch the project with a webinar on January 10. CCI has plans to market the products through its own website and outlets, the wider Craft Council network, and through online retailers like Amazon Karigar and Jaypore. Kasliwal points to the potential of the vast, untapped Indian market outside Kerala for these products.After 2018 came a smaller spell of flooding in 2019 and last year, of course, was disastrous. Today, Gopakumar’s workshop is one of the few with a steady flow of work — most others are open only two or three days a week. Given this, the new designs and the marketing push might well be a boon. And Gopakumar places a lot of faith in CCI and Kasliwal.

Sacred tradition The question is, why is the whole effort focused only on Gopakumar and his workshop? All three, Ram, Kasliwal, and Gopakumar, say that the other artisans are too conservative to adopt the new ideas. Kasliwal is philosophical about this. He emphasises the centrality of craftspeople and their agency. “Design is only a bridge,” he says. Perhaps the others will come around eventually. “Leave the designs with them. It’s for them to use it.” As with many other handicrafts, this too is a family trade. Gopakumar learnt from his uncle; the others at his workshop are family. Some 16 to 27 families are involved in the craft. Their ancestors were brought from Sankarankovil in Tamil Nadu’s Tenkasi district in the mid-18th century, during the blood-soaked reign of Anizham Thirunal Marthanda Varma, the ‘maker of modern Travancore’. They plied their trade comfortably until the mid-19th century when glass mirrors flooded the market. After that, it was only in the 1980s that interest in the metal mirrors was revived and business picked up again.A little past Gopakumar’s workshop is K.A. Selvaraj Achari’s workshop. He is the secretary of the Viswabrahmana Aranmula Metal Mirror Nirman Society, but seems completely unaware of the project and of Kasliwal. He vaguely recalls some training sessions but doesn’t realise there has been any progress since. He sends us to the society’s president, K.P. Asokan, whose workshop is a little ahead. The 54-year-old is strident in his opposition to the new-fangled ideas.What exactly is the problem? Well, tradition, for one. Asokan talks about his ancestors and their struggles, about the sanctity of their “divine product” and how it cannot be violated for profit. He gives the example of a woman who wanted a sari with Aranmula mirrors sewn onto it; he refused the order, of course. But it’s the use of wood that really raises his hackles. “The society will never promote woodcraft,” he says, and explains why. Solids expand in heat, so the metal mirror is likely to expand into its wooden frame and jerk about, causing scratches. Mostly though, Asokan says the society should have been consulted. Any decision should have been a collective one, he says. As always, it’s a conflict between tradition and innovation. The new project is exciting and well-intended but doesn’t seem to have reached a consensus yet. Without that, the best of plans might not reach the artisans who need it the most. And that would be a pity.

Artist George Fernandez opens gallery at his institute in Thiruvananthapuram
A new year in verse
To Top
error: Content is protected !!
Top