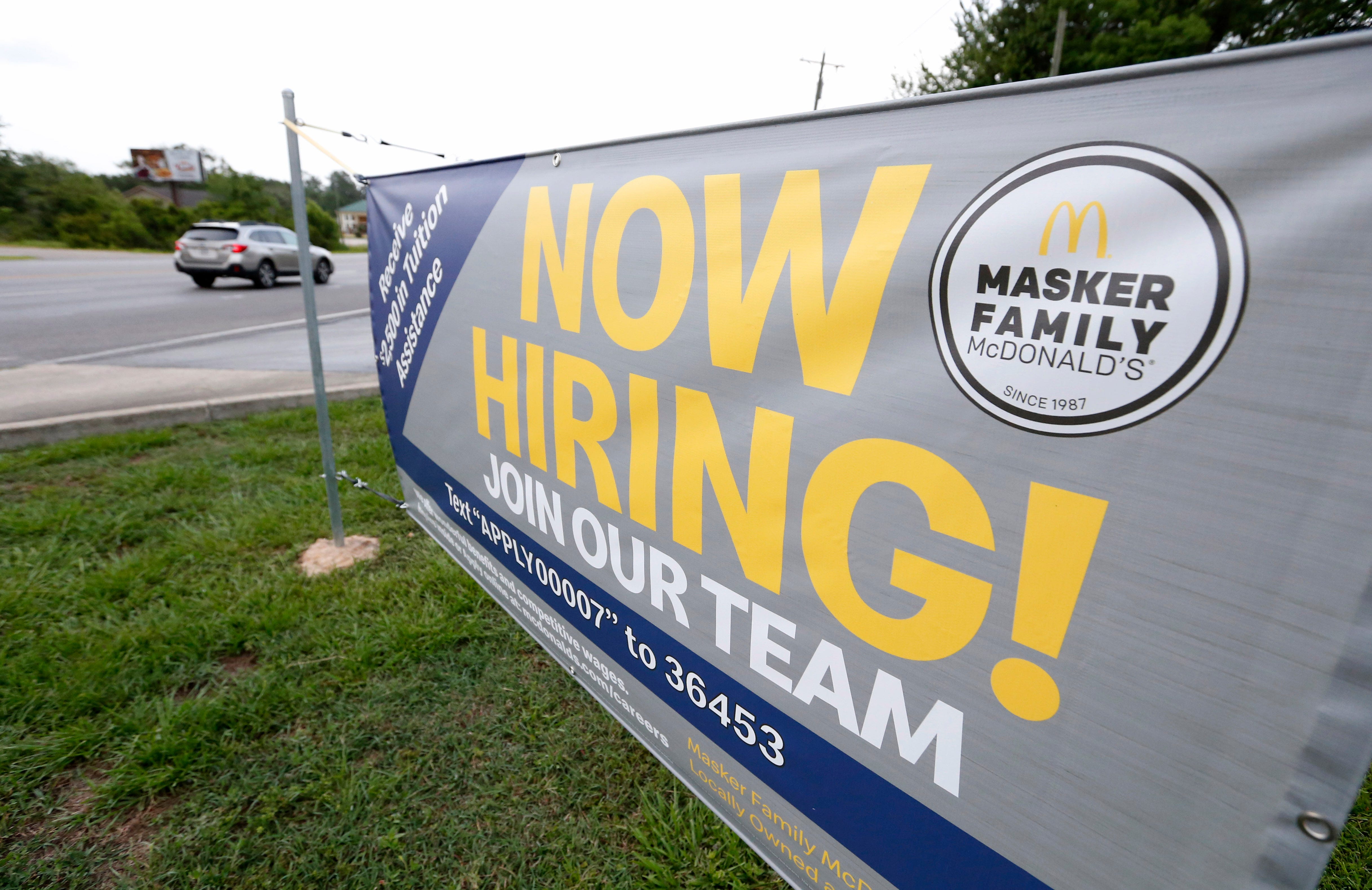 Paul Davidson
USA TODAYPublished 2:15 PM EDT Jun 7, 2020Even with COVID-19-related layoffs at historically bleak levels, another trend is quietly taking root: Businesses are starting to hire again.All 50 states have begun allowing nonessential businesses to reopen in phases, prompting restaurants, shops, hair salons and others to rehire at least some of the employees they laid off or furloughed to stem the spread of the coronavirus. Many small businesses have received federal loans that are forgivable as long as they retain or rehire staffers.Yet job postings in those and other industries are also picking up, underscoring that firms are seeking to tap a broader pool of workers, including the roughly 30 million Americans who are unemployed. Meanwhile, hiring in fields that have benefited from the pandemic is surging.The economy unexpectedly added 2.5 million jobs in May as employers rehired laid-off workers, the Labor Department reported Friday. Eight million payroll losses were expected. Although 9.3 million workers lost jobs last month, 13.1 million went back to work, according to an analysis of Labor Department data by Morgan Stanley.The unemployment rate fell to 13.3% from 14.7%A reality check: Overall hiring of new employees is still depressed. Total job postings on Glassdoor fell 5% in May, but that followed a 30% plunge in April from early March.“We have signs of stabilization but we’re not out of the woods yet,” says Glassdoor Senior Economist Daniel Zhao.Still, “We’re seeing companies now get more focused on the future,” says Paul McDonald, senior executive director at staffing firm Robert half International.Payroll processor ADP said Wednesday that businesses shed 2.8 million jobs in May, a grim total but well below the nine million economists projected. A key reason is a pickup in hiring, says Mark Zandi, chief economist of Moody’s Analytics, which helps ADP compile the report.The ADP figure raises the possibility that the Labor Department’s employment report on Friday could reveal noticeably fewer net job losses — which includes layoffs and new hires — than the eight million economists have predicted. A record 20.5 jobs were lost in April, and some economists believe job gains could resume this month.Another sign hiring is bubbling back to life is that the number of Americans receiving unemployment benefits totaled 21.5 million the week ending May 23, up from the prior week but down from 25 million earlier in the month, the Labor Department said Thursday.Pensions doomed? Are public pensions at risk because of the coronavirus pandemic? State, local budgets feel painMore layoffs: Another 1.9 million workers seek jobless benefits as layoffs persist even as states reopen economiesSome employers haven’t been able to bring back the employees they laid off. Some workers may have landed new jobs while others are earning more from unemployment checks – which are juiced by a $600 weekly federal supplement during the crisis — than they would from their normal wages.In May, job postings on Glassdoor increased 6% for restaurants and bars, 3% for beauty and fitness, 7% for travel and tourism, and 8% for private security services — needed to serve some of the restaurants, stores and office buildings that reopened, according to data Glassdoor provided exclusively to USA TODAY.Some industries have thrived during the pandemic. As Americans purchased more groceries amid restaurant closures and ordered their goods online, job postings from early March to mid-May rose more than sevenfold for grocery managers and increased 177% for workers who package goods for delivery, 145% for warehouse managers and 89% for customer service sales representatives.Job ads for public health advisors, such as consultants who help businesses manage the crisis, shot up 59% and postings increased by a third for information technology specialists, including experts who help employees set up remote computer networks, the Glassdoor data shows. Although demand for some of these positions is expected to decrease as the pandemic eases, it’s expected to remain elevated even after states reopen as consumers and employees remain leery of resuming old behaviors, at least until a vaccine is widely available, possibly by mid next year.Bank hiring also has increased significantly as low-interest rates spur more mortgage refinancings and employees are needed to handle the crush of demand for the government’s small business loan program, McDonald of Robert Half says.More broadly, demand has risen for tech workers, accountants, lawyers and creative directors in industries that are stable or growing, such as e-commerce, healthcare, financial services and insurance, McDonald says.Staffing firm Randstad says its clients have increased hiring in banking and finance by 25% compared to pre-crisis levels. And health care systems are starting to bring on workers again as they resume elective surgeries and routine checkups.Just a few months ago, when unemployment was at a 50-year low of 3.5%, companies struggled to find job candidates for those roles, McDonald says. Now, he says, some companies are taking advantage of a big supply of unemployed workers and filling those positions more quickly.Calling out racism: Ben & Jerry’s calls for the dismantling of ‘culture of white supremacy’The demise of public pensions?: Are public pensions doomed because of the coronavirus pandemic? State, local budgets feel painHiring, he says, also has accelerated in some cases because employers are conducting video instead of in-person interviews and are more receptive to allowing candidates in faraway regions to work remotely. That opens up a larger pool of candidates.“We’re seeing some clients hire more swiftly because more people are available,” McDonald says.Charter Communications, the cable and broadband giant, recently said it has hired 3,000 new employees nationwide, including billing and sales agents, nearly all of them through video interviews amid the pandemic. The company says it’s also trying to fill thousands of additional openings. The stay-at-home trend has been a boon for cable companies as customers dramatically step up TV viewing and streaming.“Through the effective use of virtual hiring practices, we have maintained a steady rate of hiring,” Seth Feit, Charter’s group vice president for Talent.

Fox News sorry after graph shows market reaction
I was overpaid. Here’s how I sent the money back
To Top
error: Content is protected !!
Top