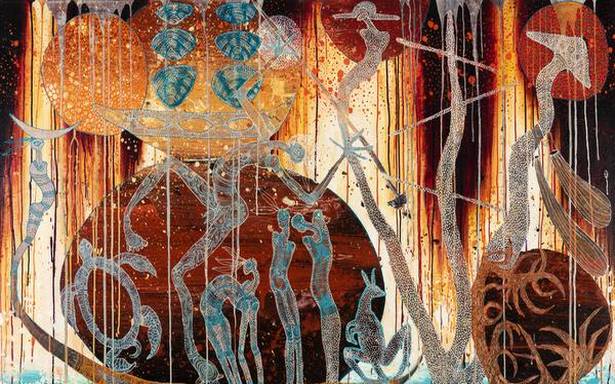 It was from grandma Wilma that Australian indigenous artist Rhonda Brim learned how to weave a dilly bag. A cultural marker of the stolen history of the aboriginal or Torres Strait Islander peoples, the dilly bag made with twisted bark fibres was used as a food strainer and preparation basket. The craft waned during days of the Mona Mona Mission — around 1913 when large numbers of Djabugay people were forcibly taken to a religious congregation in Queensland and in effect robbed of their traditional arts and language. She writes in the description of her work, “The fact that this knowledge has not been lost tells a story of revival, survival and resistance.” This is one of the many artworks that are part of Undercurrents — Cook 2020, an online exhibition that questions the imbalance in written colonial history and the First Peoples’ oral history through varied media. It has been brought to India by the Australian Consulate, Chennai. Running along with this, is CIAF (Cairns Indigenous Art Fair) 2020, which traces the response of indigenous art to climate change. Both exhibits together make for over 500 artworks that are available for interactive, 360 degree viewing, as part of the NAIDOC (National Aborigines and Islanders Day Observance Committee) week: Australia’s yearly celebrations of the history, culture and achievements of the aboriginal and Torres Strait Islander peoples.

“Indigenous art can draw from tradition. But, it can also draw from one’s lived experiences as an indigenous person in this country [Australia],” says Janina Harding, one of the curators and artistic director of CIAF 2020, speaking over a Zoom interview. The country’s diversity, in terms of communities and languages contribute to the many styles that are seen across different regions. Indigenous artist and educator Arone Meeks joins in to say, “In the central and desert area, you see the dot style of painting, and then at in Northern territory, on top of Western Australia, you have the ‘rarrk’ design [a crosshatching style done on dried bark] and the X-ray style of painting. It is all about the environment where the work is created, that has an influence on the artwork.”The aboriginal people who live in Pormpuraaw for instance, have no word in their language for ‘art’, ‘community’ or ‘culture’, says Paul Jakabowski from Pormpuraaw Art Centre, whose artists also feature in the display. He continues, “It was all one thing — culture, language… it all comes from the country. So, they are learning to express old ideas through a new language altogether.” Dance and song, much like art, is another form of self-expression through which their stolen history is narrated.

While the environment and animals are predominant subjects in indigenous art, most artworks also depict an unending search for one’s own ancestry. This idea manifests prominently here, considering that aboriginal past is filled with colonial atrocities. In Arone Meeks’ The Gesture, a marriage of the celestial and the earthly, elements that depict ‘ancestral spirits’ are across the canvas. This is another one of the many recurring motifs that appear in indigenous art. Arone explains, “It is a way we reconnect with our elders and practices. And in effect, our country.”View the exhibition at naidoc2020.ciaf.com.au till November 22. Enter NAIDOC2020 as the password.

A gift in time, saves many artists
Face-to-face with art, finally
To Top
error: Content is protected !!
Top