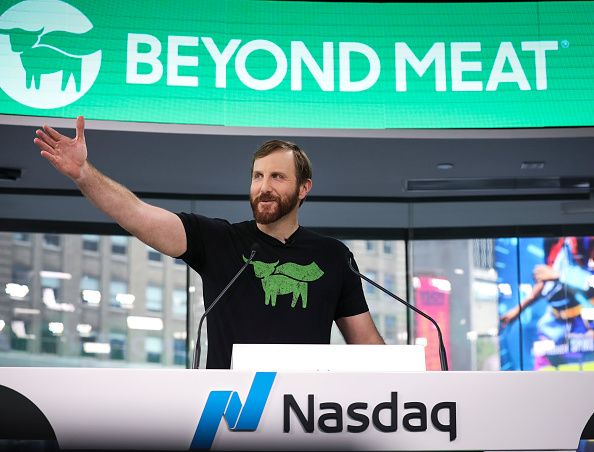 Beyond Meat CEO Ethan Brown speaks before ringing the opening bell at Nasdaq MarketSite, May 2, 2019 in New York City.

Beyond Meat is a food company. Just don’t tell that to investors.

In its trading debut on Thursday, the maker of plant-based foods that serve as a substitute for meat more than doubled in value, giving the company a market capitalization of $3.6 billion.

Based on last year’s revenue of $87.9 million, that values Beyond Meat at 41 times sales, the kind of multiple usually seen from the fastest-growing technology companies. It’s not even in the same universe as big food companies, which are typically valued at less than two times revenue. Hormel is on the high end at 2.3 times sales, while Tyson Foods has a multiple of 0.7.

Located in El Segundo, California, near Los Angeles, and with backing from Bay Area tech investors like Kleiner Perkins and Obvious Ventures, co-founded by Twitter’s Ev Williams, Beyond Meat is catering much more to the high-growth tech investor than the money manager focused on traditional food brands.

The company has what it calls an “innovation team,” consisting of 63 people, including engineers and researchers, and says in its prospectus that its success relies partly on protecting “our intellectual property and proprietary technologies.”

Beyond Meat, which sells packaged food in grocery stores and also has burgers and other items at 12,000 restaurants including A&W Canada, TGI Fridays and Carl’s Jr., priced its IPO at $25, the high end of its range, before jumping right as it started trading.

Packages of Beyond Meat Inc. beef crumbles are displayed for a photograph in Tiskilwa, Illinois, U.S., on Tuesday, April 23, 2019.

Investors are clearly valuing the company based on its growth trajectory. Revenue surged 170% in 2018 after doubling the prior year, and Beyond Meat even recorded a gross profit (the revenue left after accounting for the cost of goods sold) last year for the first time. Almost all legacy food companies grow in the single digits.

However, Beyond Meat’s gross margin of 20% makes it look like a food company and is far slimmer than what you see from software developers, internet companies and device makers that occupy the tech sector. When factoring in all the research and development costs and sales and marketing expenses, Beyond Meat lost $30 million last year.

In other words, investors are being asked to value Beyond Meat like a promising tech company because of its growth, IP and research spending, and not pay too close attention to the fact that it’s producing and selling food.