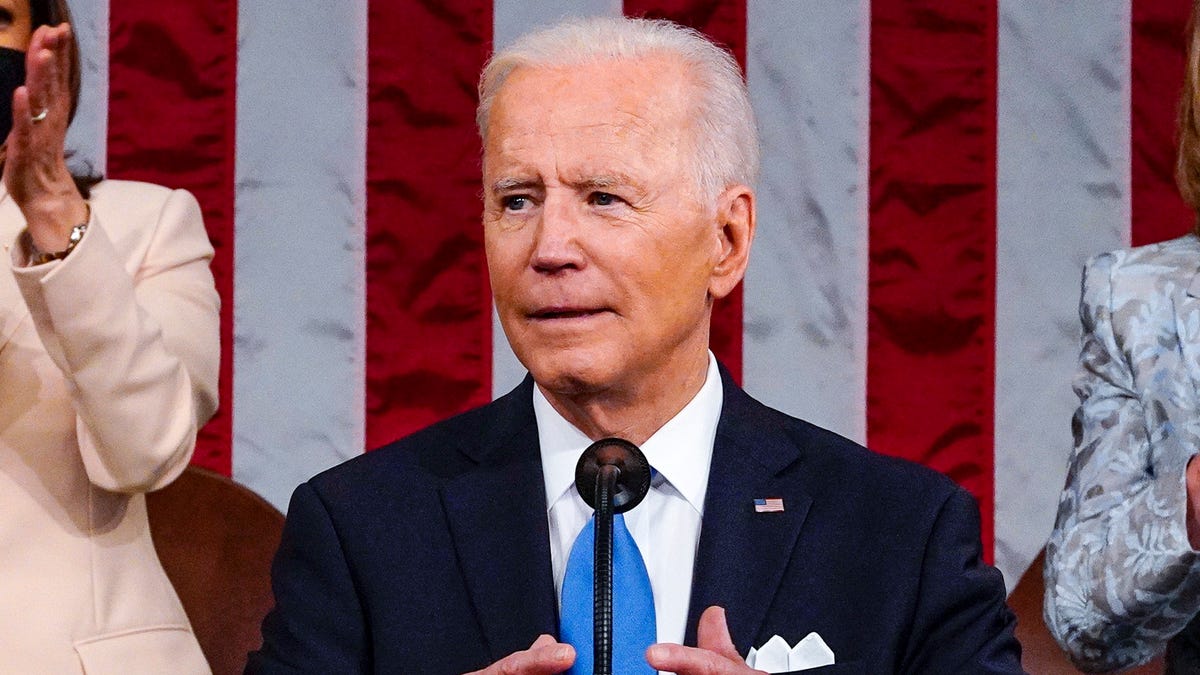 Biden stimulus package details of $1.8 trillion American Families PlanBiden stimulus package details revealed: American Families Plan includes free childcare, community college, and possible hike of capital gains tax.Staff Video, USA TODAYPresident Joe Biden on Wednesday night said some of America’s largest corporations pay no taxes, giving a big boost to recent research by the left-leaning Institute on Taxation and Economic Policy.Biden, during his first address to a joint session of Congress, didn’t mention the group by name, but he did directly pull data from the group’s early April report in calling for major corporations to “pay their fair share” of taxes.”A recent study shows that 55 of the nation’s biggest corporations paid zero in federal income tax last year. No federal taxes on more than $40 billion in profits,” the president said. “That’s not right. We’re going to reform corporate taxes.”The president added that those additional taxes would “help pay for the public investments their businesses will benefit from.” What’s a SPAC?: Shaq, Ciara and A-Rod have one. But are SPACs, the latest investment craze, right for you?Steve Wamhoff, the institute’s director of federal tax policy and co-author of the report, said he was pleasantly surprised to hear the president cite research he had done with Matthew Gardner, a senior fellow at ITEP.The ITEP report was based on a review of annual financial records by the nation’s largest publicly traded companies for their most recent fiscal year.Wamhoff noted that Biden on the campaign trail last year had referenced his non-profit group’s findings about major corporations not paying federal taxes.’We need to fix the system'”It illustrates why we need to fix the tax system,” Wamhoff said in an interview with USA TODAY. “It was a little surreal to be involved in something that was mentioned by the president of the United States. It’s also great to see this issue getting attention.”Wamhoff, who also worked for U.S. Sen. Bernie Sanders, I-Vermont, said his group or a related organization have done similar reports on corporations paying little to nothing in federal taxes dating to the Reagan administration. But he believes a majority of the general public now is interested in raising taxes on corporations to pay for additional public services.Spending cuts, not tax increasesBut Americans for Tax Reform, which promotes limited government and lower taxes, has pointed to a poll that says voters want infrastructure paid for with spending cuts — not tax increases. The group did not respond to a phone message.Meanwhile, Wamhoff  said the president’s message is gaining steam in Congress. He said he was part of a group meeting Thursday morning with the staff of House Speaker Nancy Pelosi, D-California, on tax policy.While the Democratic president has a razor-slim majority in the House, the Senate is tied at 50-50 and a few moderate Democrats like West Virginia’s Joe Manchin and Arizona’s Kyrsten Sinema have not fully embraced the president’s agenda.The institute said its findings on 2020 tax payments continued a “decades-long trend of corporate tax avoidance by the biggest U.S. corporations.” And during the Trump administration, both the 2017 tax cuts and the bi-partisan CARES Act in response to the pandemic preserved or expanded legal tax breaks.The report said that Chicago-based Archer Daniels Midland had $438 million in pretax income (earnings or profits before tax) last year and received a federal rebate of $164 million. The company did not immediately respond to a phone message.The group claims the top 10 U.S. publicly traded companies, based on pre-tax income, that paid no federal income tax or obtained a tax rebate last year were:•Charter Communications•Nike•Salesforce.com•Dish Network•American Electric Power•Danaher•DTE Energy•Xcel Energy•Consolidated Edison•NucorThe full list can be found at itep.orgHave a tip on business or investigative stories? Reach the reporter at craig.harris@usatoday.com or 602-509-3613 or on Twitter @CraigHarrisUSAT Support local journalism. Subscribe to usatoday.com.