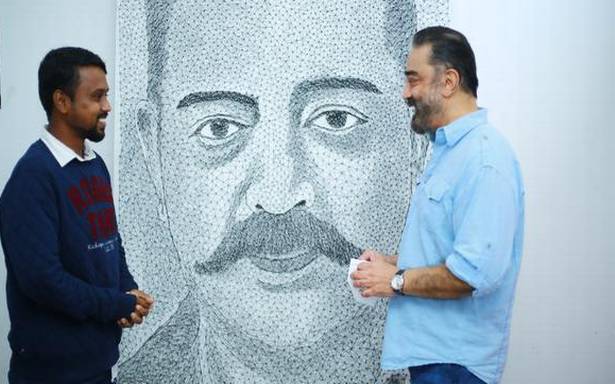 Actor-politician Kamal Haasan stares out of a wooden board in an intricate eight feet tall portrait; created by Coimbatore-based artist SK Seevaga Vazhuthi, this is a string art of the veteran actor made on a grid of 13,000 nails. “It took me three days just to hammer the nails on the board,” he says.Black threads criss-cross around nails, and the result is a larger-than-life portrait — the product of 250 hours of labour over 28 days. It is a fan’s tribute to an icon, someone whom I have admired from my childhood ,” says Seevaga, noting how dinner time conversations at his home still includes Kamal versus Rajini debates.“ I belong to Kamal sir’s camp,” he laughs.

A self-taught artist, he picked up string art technique from an Italian artist he follows on Instagram. “In India, string art has very few takers and is confined to making small portraits of butterflies and birds on boards. It is time-consuming, tests your endurance both physically and mentally, and involves meticulous eye for detail, for every inch of art you create on the board,” he explains, adding that he experiments with different types of nails and thread before picking up the right ones. Recreating iconsWhen Seevaga presented the idea to Pollachi-based entrepreneur R Mahendran, who is also the vice president of Makkal Needhi Maiam (Kamal’s political party), he came forward to sponsor the project. “Those 28 days were unforgettable,” he says, and stops to takes a pause before continuing, “Sleeping and waking up next to this life-like portrait has been an emotional experience. First, you sketch an outline map. Then, you calculate the distance between every single nail. To get a darker shade, for example around moustache, eyes or hair, you have to hammer nails closely. An eight kilometre long black thread is strung from one point to another in different patterns and styles to create the portrait. You have to use more rounds of threads to get a similar shade. I have used different shades for the skin, eyes, hair and shirt.” He plans to teach string art to budding artists. “I plan to come up with a mega icons series with portraits of 20 real life personalities to build interest. It took me three hours to perfect textures and shades for an an area as small as one sq.ft. The challenge is to get it right without compromising on emotions. I hurt my fingers so many times while hammering and took frequent breaks as your hands and neck start aching every few hours.” His video on the making of string art went viral on social media. “Kamal Sir himself told me that he watched the video a number of times.”

Last year, Seevaga made a 3D illustration of another portrait of his favourite star, this time using 3,000 cups. “The cups were arranged on a 200 sq.ft area. I filled them with five different colours and attempted pixel mapping to create his portrait. I received a personal call from Kamal sir. He said ‘outstanding work’ and I was overjoyed,” he says.

He also compiled 40 portraits of the actor from his various films including Apoorva Sagodharargal, Vazhvey Maayam, Moonram Pirai, Anbe Sivam and Dasavathaaram. As of now, the book graces the table at the Raaj Kamal Films International office in Chennai. “I feel so proud to see my book in the backdrop when Kamal sir gives interviews from this room,” says Seevaga.The first portrait he made is the iconic Chappani played by Kamal Hassan in the film 16 Vayathiniley.

Seeva Vazhuthi with his book, a compilation of portraits of the actor from his films
| Photo Credit:
Special Arrangement

The artist holds a Masters degree in Mass Communication and Journalism from PSG College of Arts and Science, and now works as a freelance content writer whilst pursuing art.He now has set his eyes on 3D sculptures and flip art.“I chose Kamal sir as my theme because as an artist I am in awe of his work. It also helped me reach out. A pat from him recharges me and pushes me to create something that is extraordinary. There is self-learning too along the way,” he adds.You can watch the making video of string art at: https://youtu.be/07bNponGClg 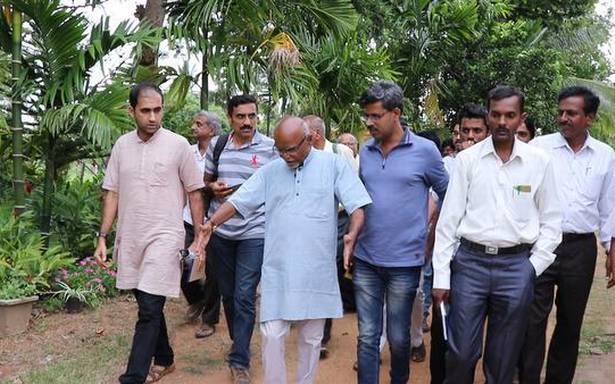