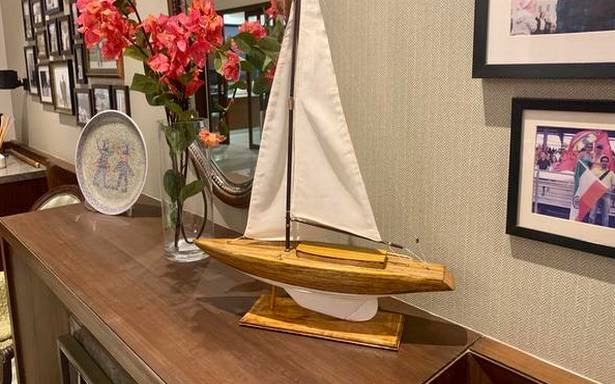 “All the old wooden boat builders are disappearing fast in Britain. Lovely to see a model of one,” reads a feedback on a social media post about a miniature sail boat. “He’s talking about the ‘Dragon’ sailing boat designed originally by Norwegian Johan Anker in the 1920s,” says Coimbatore-based Queenthunk Amalanathan F (Amal) who built the scale model of the same from scratch and posted a few photos on Facebook. “Dave Taylor who is from Europe commented how he had raced on them during his young days when such wooden boats were made in the UK. The Dragon is a one-design keelboat which was later used in the Olympics.”

Amal’s handcrafted model in balsa wood is now a part of the home décor at Neeraj Kakar’s home in Chandigarh. “It sits pretty on my fireplace,” says Neeraj, an IT engineer. A regular visitor at Defence expos and Aero India shows, Neeraj is passionate about military equipment and its technology, and is also collector of miniature models. “I already have Tejas, the homegrown fighter aircraft, the Light Combat Aircraft. I wanted Amal to experiment with the sail boat and we ended up creating this unique race boat.”

Amal also finished a 16-inch miniature of INS Baratang (T68) the fourth and last Bangaram-class patrol vessel of the Indian Navy. “It is designed for use in search-and-rescue operations in coastal areas and the exclusive economic zone. This naval ship is in active service. The model was built to gift a Naval officer.”Ship modelling is tough, states Amal as one has only photo references to understand the design. “It’s very difficult to get a blueprint. So research is a constant but one has to also learn techniques and skills like drilling and sculpting. I try and achieve 80 percent accuracy.”As Neeraj puts it, “Amal’s models are unique and an exact replica of the original. Internationally, ship modelling has picked up as a hobby as well as a profession, but in India there is a market for such models only at professional exhibitions and museums. In the US, where I lived for many years, model ships are a part of décor at homes.”

Having taken up the project during lockdown, Amal upcycled materials like old telephone coils, broomsticks and discarded plastic sheets. “I used whatever I could lay my hands on at home. The sail cloth is an upcycledveshthi while a pair of chopsticks make up the pole. The chain which I wore during my college days, is also a part of the design,” he laughs.Over the last decade, Amal has built a fleet of 30 miniature models including INS Vikramaditya, INS Veer, INS Trishul, and INS Kavaratti. Miniatures of PSLV, Chandrayaaan I and II, Space Shuttle Atlantis that he built using plastic foam sheets are also a part of his collection. “It’s an expensive hobby. People often buy plastic models that are available on Amazon for a cheaper rate. Most of the ships are working models,” he states.Some sail ships and sail boats are under construction, like wind star, Russian missile boats used in World War II and a working model of a 4-ft Trident, a speed boat that can be used for racing. Though the craft requires patience, Amal says it gives him a sense of sportsmanship. “I also become an artist which is satisfying. My dream is to build a Chola dynasty model ship’s fleet and hand it over to the Tanjore Musuem of the Tamil Nadu Government. The project needs financial support and research.”To know more, follow queenthunk_amalanathan on Instagram

Raza centenary: The artist who brought literature, music and painting together
Bangalore to Bengaluru: Shanthamani M’s online exhibition, ‘Past Continuous’, portrays a city in flux
To Top
error: Content is protected !!
Top