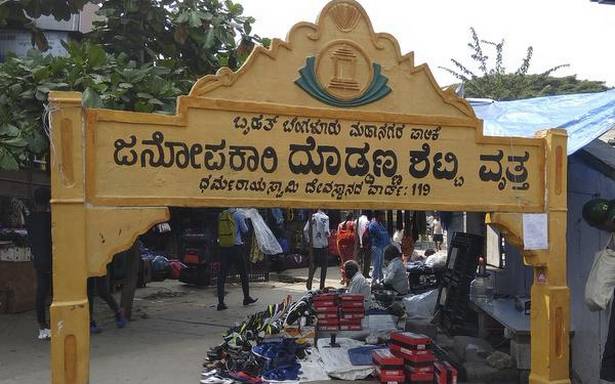 Continued…..Doddanna hall functioned as a school during day, an auditorium for public functions in the evening and during the night it served as a cinema theatre. Till Sir KP puttanna Chetty Town hall was built in 1935, it was the only big indoor space in the city to conduct public functions. Hence, it was a highly sought after venue of the city.Whenever other organizations conducted programmes here, not only Doddanna assisted them with all the needed help but used to take part actively as if it was an event of his own institution. His graceful presence was an inspiration for others to hold their functions in the Hall.DVG, in his memoirs Jnaapaka Chitrashaale, gives several references for meetings held in this place. In the year 1910, he had assembled a big gathering here to express dissent against an amendment that the government had proposed to implement regarding the property rights to the converted heirs.Under his guidance, a function in memory of Mahadeva Govinda Ranade was done in this Hall. Dewan Sir M.Visvesvaraya wanted to popularise science among the general public. In 1917, He suggested to Bellave Venkatanaranappa who was teaching Physics at Central College to take the lead. It was decided to constitute a committee for this purpose and also float a monthly science journal. The inaugural function of the Karnataka Vignana Pracharini Samiti formed for this purpose was held at Doddanna Hall. Sir M.V. delivered the inaugural address. Bellave Venkatanaranappa spoke about the use of the knowledge of Physics in day-to-day life, Nangapuram Venkatesha Iyenagar spoke on Astronomy while YK. Ramachandra spoke about architectural patterns for residential buildings .This venue was also in demand for Music Concerts, Dance, Drama and Yakshagana performances. Thus, there were hardly any day which was vacant, due its vast accommodation and proximity by being in a prominent location of the city.There was a very spacious field around the hall. This ground was also given out for exhibitions, professional drama companies to build temporary theatres and other such bigger gatherings. One such historically important occasion was a week-long national level fine arts meet, organised by Armature Dramatic Association(ADA) in January 1919. Nobel laureate Rabindranatha Tagore inaugurated the rare event on the first Day. Literary stalwarts of those days like TP. Kailasam, Bellari Raghavacharya, Tirumale Tatacharya Sharma and others had teamed together to make the event a memorable one. When silent movie era dawned, Doddanna Hall got upgraded to be a film theatre. Raja Harischandra was the first silent movie of the country directed and produced by Dadasaheb Phalke in 1913. It did not take much time for the movie to be brought to the city and Doddanna hall had the credit of being the venue for the first screening of the film. What was Doddanna Hall to old Bengaluru, Elgin Hall (1896) was to Civil and Military Station or Cantonment. In Elgin, travelling theatrical troupes performed plays and dramas to entertain the natives. From 1918, silent movies entertained the people here. With the advent of cinema , Eligin took on a new lease of life as Elgin Talkies equipped with a projector and a sound system. But in grace and architectural style Doddanna hall was too elegant.During silent movie era, to keep the audience engaged, the theater owners used to invite music troops to give programmes along with the screening of the film. The classical music orchestra of Karigiri Acharya and his brother Gopinatha Dasaru of well known Prabhat Family of artists of Bengaluru, were popular performers. They would sit in the balcony and render the compositions of Tyagaraja, Purandaradasa, and others, normally suitable to the content of the film.In accordance with the popularity and variety of the films shown the proprietors changed the name of Doddanna Hall to Paramount Theatre.The first talkie film in Kannada Sati Sulochana (1934) was screened here. It was also the first film to be screened in the Mysore Province. It ran house-full at Paramount for six weeks. People used to come to see the picture from far off places by bullock carts. Many a times, the proprietors would make arrangement for food and stay in the Hall for those who could not go back to their places after the late night show. For several decades Paramount entertained the cine-goers with several box office hit films of the countryAfter having played several roles, Doddanna Hall/Paramount Theatre was brought down in 1974 and twin theatres Parimala and Pradeep were built in 1976 in the same place. KR market square is named after Doddanna and the yellow plaque of BBMP in one corner reminds the passers by of the great philanthropist of Bengaluru.Concluded.sureshmoona@gmail.com