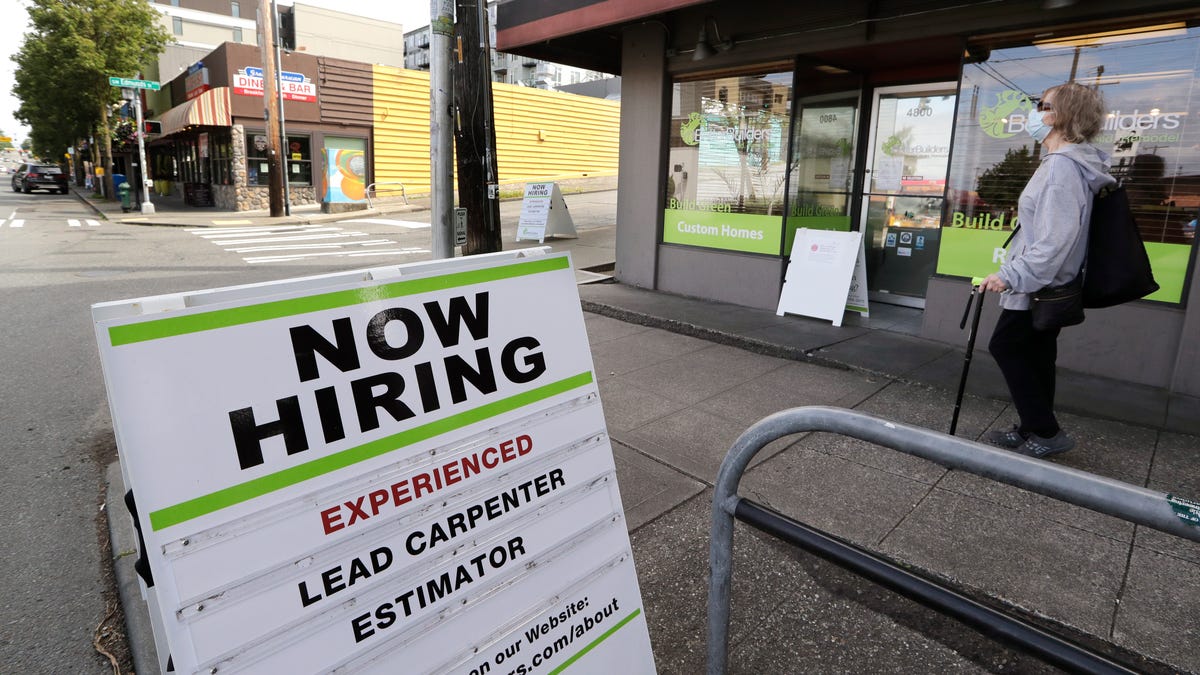 | USA TODAY
Biden: Latest jobs report ‘dire’President-elect Joe Biden says that the most recent jobs report is “dire” and that there is no time to lose in crafting a rescue package as millions of people have lost their jobs or have seen their incomes slashed during the pandemic. (Dec. 4)APThe U.S. economy added a modest 49,000 jobs in January as surges in COVID-19 cases persisted but related business restrictions eased somewhat, kicking off a year that’s expected to bring a pickup in hiring as more Americans are vaccinated.The unemployment rate, which is calculated from a different survey, fell from 6.7% to 6.3%, mostly because of a big drop in the number of Americans working or looking for jobs, the Labor Department said Friday.Economists surveyed by Bloomberg had estimated that 70,000 jobs were added last month.Also disappointing: Total job gains for November and December were revised down by 159,000.The lackluster report comes as President Joe Biden and congressional Democrats look to move quickly on a $1.9 trillion stimulus aimed at easing the economic pain Americans are suffering as a result of the pandemic. Early Friday, the Senate approved a budget resolution that will pave the way for the chamber to take up Biden’s American Rescue Plan without the threat of a GOP filibuster.The economy, meanwhile, resumed adding jobs last month after cutting positions in December for the first time since the depths of the pandemic in April. The nation has recovered more than half the 22.2 million jobs wiped out in the health crisis as restaurants, shops and other businesses shut down by the outbreak were allowed to reopen, and the outlets brought back many furloughed workers.But the rehiring has been interrupted by a virus that has been spiking across most of the country this winter, triggering renewed restrictions on businesses, fewer visits by consumers and hundreds of thousands of layoffs. While many industries have stepped up hiring, restaurants, hotels and arts and entertainment venues have cut hundreds of thousands of jobs in recent months. Total U.S. payrolls are still about 10 million below their pre-pandemic level.In January, the number of Americans on temporary layoff fell by 293,000 as restaurants, shops and businesses recalled some workers. About 27% of unemployed workers said they were on temporary layoff, down from 28% the previous month. That means many workers could still be brought back to their old jobs. But some furloughs and temporary layoffs are becoming permanent. The ranks of workers permanently laid off rose by 133,000 to 3.5 million, leaving lasting scars in the economy.Caressa Maltos, 31, of Seattle, Washington, was laid off from both her restaurant jobs in March. One of the eateries brought her back in May at about half her normal hours and pay but laid her off again in November. Even with unemployment benefits, she has dipped into her savings to meet basic expenses and stopped ordering takeout, taking car trips to visit her father and brother, and buying clothing.She expects to return to her waitressing job when the restaurant reopens in early March, but only for a few weeks. Maltos, who lives with her boyfriend, is  due to give birth in early April.“I’m nervous all the time,” she says. “If we keep closing, will there be a job for me to return to? Are we literally going to be scraping by? I’ve never had a child. I’d like to be able to take my daughter on trips.”  Leisure and hospitality, which includes restaurants and bars, lost another 61,000 jobs in January after shedding 536,000 in December. Retail cut 38,000; health care, 30,000; transportation and warehousing, 28,000; and manufacturing, 10,000.Professional and business services led the industries adding jobs, with 97,000. Government added 43,000, but the total was inflated by 85,000 gains in state and local government education. Job losses last year distorted normal hiring and layoff patterns at schools, leading to job gains after seasonal adjustments, the Labor Department said. A similar quirk led to 34,000 payroll gains in private education.Excluding education, state and local governments continue to trim jobs amid higher health care costs and falling revenue.The broader picture of the pandemic and its effect on the economy was mixed last month. Daily coronavirus cases hit records amid holiday travel and gatherings and colder weather, but hospitalizations have declined recently and some constraints on restaurants and other outlets have eased, Goldman Sachs says. States such as California, Michigan, Illinois, Colorado, Maryland and New York have announced at least partial reopenings of restaurants, according to Pantheon Macroeconomics.“The labor market was frozen at the start of the year, and is completely dependent on the pace of reopening, which in turn is contingent on the speed and sustainability of the fall in hospitalizations,” Pantheon Chief Economist Ian Shepherdson wrote in a note to clients.The number of businesses open and employees working has leveled off in recent weeks after falling for a couple of months, according to Homebase, which provides employee scheduling software.As vaccinations against COVID-19 spread, Oxford Economics expects employers to add a whopping 6.6 million jobs this year as unemployment dips below 5% by year’s end. Yet new variants of the virus pose a risk: They could keep infections elevated longer than anticipated and delay the easing of some restrictions. Another bubble?: Are we trapped in another housing bubble? A rapid rise in home prices has some experts worriedCEO shakeup: Kenneth Frazier stepping down as Merck CEO, becomes executive chairman

Sears and Kmart store closings continue. Is your location closing in 2021? See the list.
‘These people just want to censor me,’ fired Parler CEO says free speech platform is trying to muzzle him
To Top
error: Content is protected !!
Top