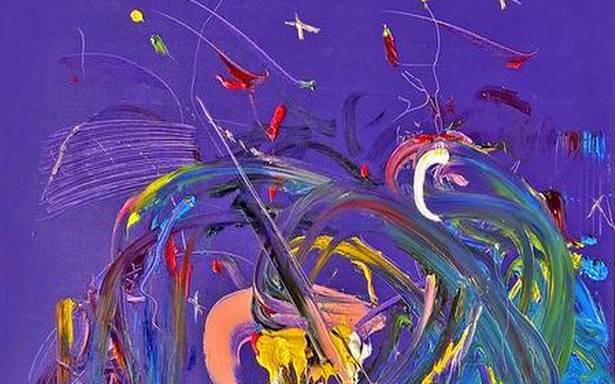 Art and its appreciation need no longer be a one-dimensional affair as Bengaluru-based artist Raghava KK presents in his latest series, Eye Candy

The year 2020 marked 25 years since Raghava KK made a splash in the art world; it was also a personal milestone for him — he turned 40.Plans were afoot for grand openings of art shows in Turkey, Colombia, Indonesia and other parts of the world, when the lockdown brought everything to a grinding halt.

Despite a tumultuous year on both personal and professional fronts, Bengaluru-based Raghava was not willing to let a jubilee year go unnoticed. Raghava who catapulted to fame quite early, starting as a cartoonist for local dailies while still in school and holding his first big art exhibition at the age of 20, has long believed in a crossover between science, tech and art.“I called my friend Anto Philip, CEO of the Under 25 Club and told him, ‘I want to do something I’ve never done before, something that is the most honest thing I’ve ever done, and something that will shake people up’,” says Raghava, recounting how his latest series Eye Candy, came into being.Together they decided on ‘breaking down the elements of Instagram’, with the intention of modifying it to create a completely new experience.

The result was an immersive, interactive experience with art that took shape on Instagram and its elements of stories, reels, IG lives, IGTV videos and posts, as their canvas. “Anyone can post art on Instagram. I wanted to build a different approach to solve problems. Instead of looking for solutions, I focussed on looking for conflict and using play to resolve it.”Anto handpicked six of his students to spend a week with Raghava where they identified seven words that were common to every one in the group.They explored these seven words (or topics) such as balance, perspective, boundaries, loss and conflict, through three key ideas — Side A, Side B and Play. According to Raghava, ‘Side A’ and ‘Side B’ depict the contrasting sides of an emotion that can achieve resolution only through ‘Play’.He elucidates. “For example, conflict can be terrible as it cripples your ability to think straight. On the other hand, conflict gives you an opportunity to create, to find out who you really are. It is only through ‘play’ that conflict and lack of conflict come together, resulting in a unique existence.”“We were trying to create an art form. Over a period of six days, we finished ideating, shooting and took risks by talking about difficult topics in a true collaboration of work,” he continues.

The visual, visceral joy of creating is evident in their work — squeezing paint from tubes or scratching surfaces or even hanging upside down while talking about vulnerability — as the artist experiences in real time what he is talking about in the videos. “It is a conversation on how binaries are dissolved using art,” he says.Each topic was unveiled on Instagram over a period of three months so viewers could ‘see’ each topic, and how art resolved it.. “The purpose of art is to give one a glimpse of hope, of an alternate reality,” he says, adding, “Art is not the authority on life, but it constantly inspires us to be the next best version of ourselves.”“It helped me rethink my idea of what the role of art in the world is. I believe there are three types of people — those who believe art is not necessary, those who believe art can heal and those who understand that while art may not save humanity, it is art that will make humanity worth saving,” he concludes.Though Eye Candy culminated on March 10 with the unveiling of Introspection (the last topic), the artist continues to interact with viewers on Instagram.Eye Candy can be viewed on Instagram @Raghavakk

Telangana Martyrs Memorial: A new landmark
Watercolours by artist Hiremath hark back to a simpler time
To Top
error: Content is protected !!
Top