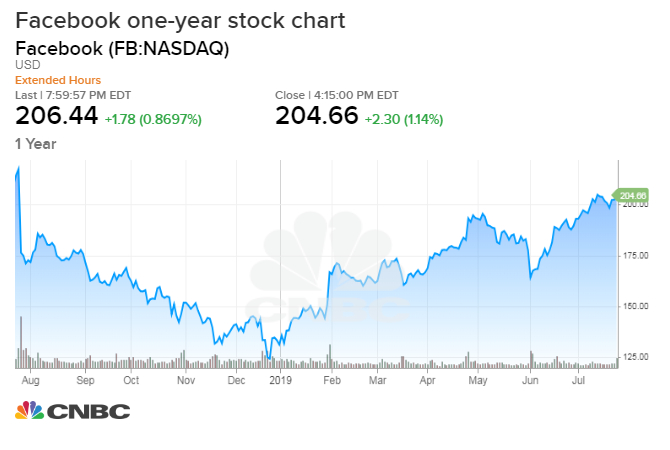 Facebook proved in its second-quarter earnings that intense scrutiny and negative headlines have not stopped users or advertisers from continuing to make the social network a major part of their daily lives.

Facebook improved daily user growth by 9%, a “standout metric,” Munster said, given all the negative attention.

“People deleting Facebook was just talk. It shows the resiliency of the platform.”

“This is symbolic of a platform where everything is working for Facebook right now,” Munster said.

The problem? Between privacy regulation and antitrust investigations, no one — not even Facebook management — knows how the platform will work in the future.

“There are much better companies to own,” the tech investor said.

Facebook shares already were up 56% in 2019 as of Wednesday’s close and edged higher in after-hours trading on Wednesday.

Munster said investors cannot expect any clear answers about government regulation for at least six months. That is a difficult scenario in which to favor a stock.

“An unknown is a negative for stock multiples,” Munster said.

He said any potential resolution can cause some level of pain to Facebook’s ability to monetize users.

“They will make it slightly more difficult for FB to monetize data, or make it easier for consumers to hold back on the information they are sharing with Facebook and Instagram.”

Munster said those headwinds are part of the reason why Facebook guided Wall Street to slowing of revenue growth in the final two quarters of 2019. (The company also cited emerging markets.)

Facebook always has tended to be conservative in its guidance, and as a result, Munster said he would not be too concerned about the cautious language. But he does believe part of the messaging was “political,” “largely symbolic” and “appeasing.”

The real answer? “They don’t know, and need to be more conservative,” the tech investor said.

On Wednesday, Facebook struck a $5 billion settlement with the Federal Trade Commission following the 2018 Cambridge Analytica scandal in which the data of 87 million Facebook users was improperly accessed, the largest ever imposed by the FTC against a tech company. Earlier this week, the Department of Justice announced a broad antitrust review of the dominant tech platforms, highlighting social media as one area of interest.

“We believe that there needs to be a regulatory framework in place,” said Facebook CEO Mark Zuckerberg on the call with analysts after the report. “My broader concern is that if that doesn’t get put in place, then frustration with the industry I think will continue to grow.”

Facebook said it counts more than 2.7 billion monthly users across its family of apps, up slightly compared to the previous quarter. In the U.S. and Canada, users rose to 187 million from 186 million a quarter earlier. But it is how the company and its huge platforms will be allowed to interact with users, and each other, in the future that matters most.

Munster said from a privacy perspective the tools that Facebook may need to provide users with to help them hold back data are a concern, but lesser than the broader headwinds related to how the Department of Justice will think about antitrust regulation and Facebook’s “high market share position.”

“Instagram would not be Instagram if not on the platform of Facebook,” and that is why Munster ultimately concludes that when it comes to stock selection, “there are better places to be.”