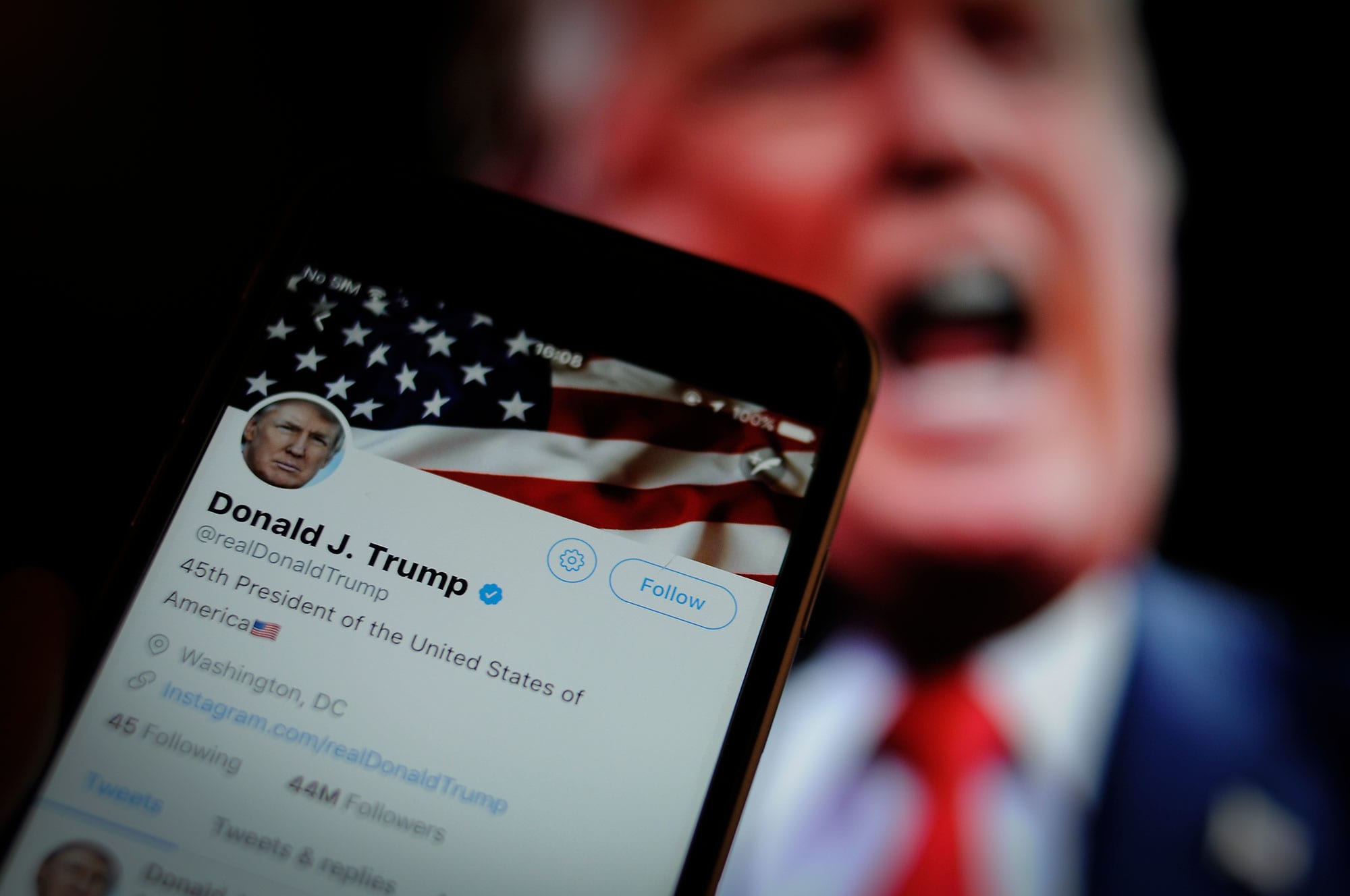 Twitter and Facebook on Wednesday said they would lock the account of President Donald Trump after he continued to make false claims about the results of the 2020 U.S. presidential election.Twitter said Trump’s account would remain locked for 12 hours after he removed the tweets that it said breached the company’s civic integrity policy.A spokesperson for Twitter confirmed to CNBC Thursday that Trump has now removed the offending tweets, “and the 12-hour clock is on.” The company declined to provide further details on exactly when the block on Trump’s account would end, but the lock could be removed around 3 p.m. ET.Twitter has also warned that if Trump continues to violate the company’s rules it “will result in the permanent suspension of the @realDonaldTrump account.”Facebook said it would lock Trump’s account for 24 hours, preventing him from posting on the service. Facebook-owned Instagram is also locking Trump’s account there.”We’ve assessed two policy violations against President Trump’s Page which will result in a 24-hour feature block, meaning he will lose the ability to post on the platform during that time,” Facebook said in a statement.Snap told CNBC that it has locked Trump’s account because it was deeply concerned about Trump’s dangerous rhetoric.”We can confirm that earlier today we locked President Trump’s Snapchat account,” said a Snap spokesperson on Wednesday.  It is not the first time Snap has taken action against Trump. Last June, the company decided to stop promoting Trump’s content on its “Discover” tab, meaning it would only be visible to those that subscribe to Trump or search for his content.Twitter removed three tweets by Trump, making them no longer visible to users. This is the first time that the company has removed tweets by Trump for reasons other than copyright takedowns, the company confirmed.Among the removed tweets was one containing a video by Trump addressing the Washington rioters. In his recorded statement, Trump falsely claimed that the election “was stolen” before asking rioters to go home.That video was also removed by Facebook and YouTube.”This is an emergency situation and we are taking appropriate emergency measures, including removing President Trump’s video,” Facebook Vice President of Integrity Guy Rosen said in a tweet. “We removed it because on balance we believe it contributes to rather than diminishes the risk of ongoing violence.”Facebook on Wednesday evening announced additional steps it would take. This includes searching for and removing content that praises or supports the storming of the Capitol, calls to bring weapons to locations around the country, photos or videos from the rioters, calls for additional protests, and any attempts to stage more violence in the coming days.Facebook said it will update the label it places on content that attempts to delegitimize election results.”Joe Biden has been elected President with results that were certified by all 50 states. The U.S. has laws, procedures, and established institutions to ensure the peaceful transfer of power after an election,” the updated Facebook text will read.Google-owned YouTube said it removed the video because it violated policies of alleging widespread fraud changed the outcome of the 2020 U.S. Election. It will, however, allow copies of this video “if uploaded with additional context and sufficient educational, documentary, scientific, or artistic value.”Twitter initially placed restrictions on Trump’s tweet containing the recorded statement before the tweet was later removed.Earlier, Twitter said it would “take action” on any content that calls for violence in regard to the riots happening in Washington.”Let us be clear: Threats of and calls to violence have no place on Twitter, and we will enforce our policies accordingly,” a spokesperson for the company said in a statement.Additionally, the company said it will significantly restrict engagement with tweets labeled with its Civic integrity policy, which does not allow Twitter users from using the service to manipulate or interfere with elections or other civic processes.”We are also exploring other escalated enforcement actions and will keep the public updated with any significant developments,” the company tweeted.Earlier, Facebook said that it was “actively reviewing and removing any content that breaks these rules.””The violent protests in the Capitol today are a disgrace,” Facebook spokesman Andy Stone said in a statement. “We prohibit incitement and calls for violence on our platform.”The statements come as rioters in support of President Donald Trump breached the U.S. Capitol, forcing lawmakers to evacuate.Calls are mounting for Twitter to shut down the president’s account or take other extreme action. Former Facebook Chief Security Officer Alex Stamos said it is time for Twitter and Facebook to cut off Trump.”Twitter and Facebook have to cut him off,” Stamos said. “There are no legitimate equities left and labeling won’t do it.”Chris Sacca, an early investor in the company, tweeted “You’ve got blood on your hands, @jack and Zuck,” referring to Twitter CEO Jack Dorsey and Facebook CEO Mark Zuckerberg.”For four years you’ve rationalized this terror. Inciting violent treason is not a free speech exercise. If you work at those companies, it’s on you too. Shut it down.”The ADL issued a statement calling on social media companies to suspend Trump’s accounts “ASAP.”–CNBC’s Jennifer Elias contributed to this report.