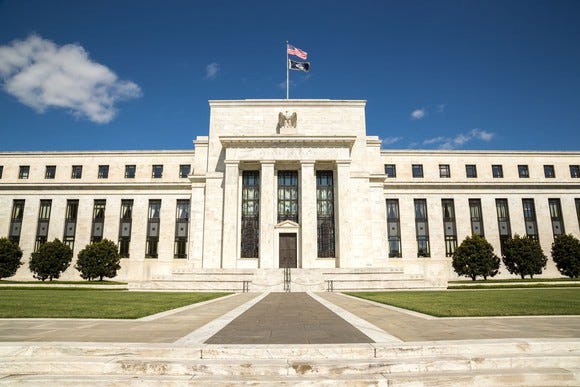 WASHINGTON – For the second time in two months, the Federal Reserve on Wednesday agreed to press down on the economy’s accelerator to keep the 10-year-old expansion chugging along.

A divided Fed lowered its benchmark interest rate by another quarter percentage point to a range of 1.75% to 2% in an effort to stave off a possible recession triggered by a global economic slowdown and the U.S. trade war with China.

In a statement after a two-day meeting, the central bank also signaled the strong possibility of another rate cut later this year, citing “uncertainties” about its outlook and vowing to “act as appropriate to sustain the expansion.”

But policymakers are split, with seven saying rates should fall further by year-end, five saying they should be unchanged and five who appear to oppose both recent cuts and prefer slightly higher rates by December.

Initially, the Dow Jones industrial average fell on the news but by 4 p.m. the blue-chip average had shifted into positive territory, edging up 36 points to 27,147. The market recovered after Fed Chairman Jerome Powell said the Fed is prepared to cut rates further if necessary, says Chris Zaccarelli, chief investment officer for Independent Advisor Alliance.

President Trump reacted to the announcement with more criticism of the central bank, saying it had no “guts” and had failed again.

At a news conference, Fed Chairman Jerome Powell said he views the recent rate cuts as a measured adjustment, adding, “The U.S. economy itself — the consumer part of it — is in strong shape.”

But he added, “If the economy does turn down, a more extensive series of rate cuts could be warranted.”

Wednesday’s move is likely to set off a domino effect across the economy, pushing down rates for credit cards, home equity lines, adjustable-rate mortgages and auto loans. Yet it will also squeeze savers, particularly seniors and others on fixed incomes, who were just starting to benefit from higher savings account yields.

Just last year, the Fed was tapping on the economy’s brakes. The two rate reductions since July mark the first in more than a decade and reverse just a tiny portion of the nine hikes the Fed approved from late 2015 through 2018.

Those rate increases were designed to head off a potential spike in inflation and begin to bring rates back to normal as the halting recovery from the recession of 2007-09 finally picked up steam.

Powell told reporters Wednesday that global growth has slowed further and the trade war intensified in August with new tariffs on Chinese imports.

“We do see those risks as more heightened,” Powell said.

At the same time, some recent developments have bolstered the argument of Fed officials who believe rates should hold steady. One measure of inflation that strips out volatile food and energy items hit a 13-month high in August. And trade tensions have eased recently, with U.S. and Chinese officials scheduled to talk next month and each side taking symbolic steps to lessen the acrimony.

Fed Chair Jerome Powell repeatedly has said the economy is still performing well, with the 3.7% unemployment rate – near a 50-year low – fostering faster wage growth that has fueled healthy consumer spending. Consumption makes up about 70% of economic activity.

But President Donald Trump’s trade war with China has hurt exports and factory output and begun to raise prices for American shoppers. The conflict also has generated business uncertainty that has dampened investment. An index of manufacturing activity for August reflected contraction for the first time since 2016. And another inflation measure that the Fed monitors more closely remains stubbornly below its 2% target.

Those developments raise the risk of recession, and many economists are forecasting a downturn by the end of next year. The Fed, in turn, is taking the unusual step of trimming rates even while the economy is still on solid footing to ward off a slump.

How fast rates will rise

The Fed’s median forecast calls for its benchmark rate to remain unchanged at 1.9% by the end of the year and at the end of 2020. But that partly reflects the sharp divisions on the Fed’s policymaking committee. Seven of the 17 policymakers believe the Fed should reduce the rate again later this year, lowering it to 1.6% by December.

What the Fed ultimately does could hinge on developments in next month’s trade talks. If there’s substantial progress, the Fed may be less likely to lower rates again. But if the negotiations stall, a third hike may be more likely.

“Although household spending has been rising at a strong pace, business fixed investment and exports have weakened,” the Fed said.

Economic growth slowed to an annual rate of 2% in the second quarter from about 3% early in the year and in 2018 as weak business outlays and a wider trade gap partly offset robust consumer spending. Also, the positive effects of federal tax cuts and spending increases are fading.

Fed officials expect the unemployment rate to end this year and 2020 at its current 3.7%, above the 3.6% it predicted in June.

Average monthly job growth has slowed to 158,000 from 223,000 in 2018, though last year’s figures are expected to be revised down substantially. Economists cite the slowing economy and the struggles employers face in the hunt for qualified workers with historically low unemployment.

Inflation remains below the Fed’s 2% goal, at least partly because of long-term factors such as discounted online shopping.

The Fed met the market’s expectations, cutting rates by a quarter-point and paving the way for another drop later this year. But policymakers are divided and further moves could depend on trade developments.

“The wildcard in all of this is trade negotiations, which at this point could go either way,” James Marple, senior economist at TD Economics, wrote in a note to clients.

Can you shop online and pay with cash? Amazon says yes
Get incredible savings on Ray-Bans, All-Clad cookware, Devacurl, and more
To Top
error: Content is protected !!
Top