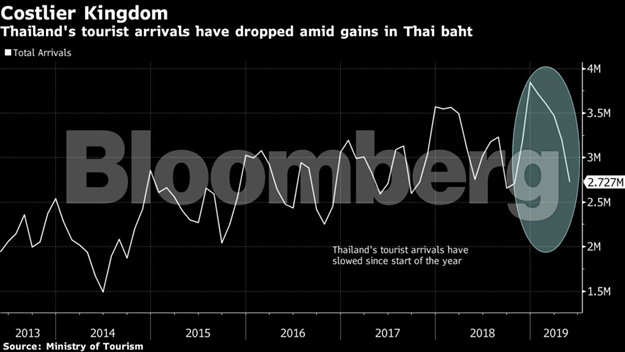 Thailand’s tourism minister has blamed a surge in the baht for sapping tourist arrivals into Southeast Asia’s second-largest economy, and says he’ll take up the matter with the central bank, highlighting rising concern over the currency’s gains.

Arrivals have dropped because of the baht’s strength, Piphat Ratchakitprakarn, minister of tourism and sports, told reporters in Bangkok after he officially began his new role. Piphat said he’d discuss with the Bank of Thailand and the finance minister what can be done to help support the industry.

Thailand’s currency is among the strongest in emerging markets over the past 12 months, and the jump has been a headwind for an economy that’s also being hurt by the fall-out from global trade tensions. The central bank has signalled its concern about the advance, and on Wednesday Governor Veerathai Santiprabhob said he’s tracking the currency closely and is prepared to act.

“The Thai baht’s strength is part of the reason why the number of tourists has dropped, as those who come would get less money from their currencies to spend,” Piphat said on Thursday. “Tourism is considered to be one of our country’s main revenue drivers. I will do everything I can to make sure that arrivals increase and more revenue is generated than before.”

Piphat’s aim to boost the number of arrivals contrasts with the view from his predecessor, Weerasak Kowsurat, who said Thailand should care less about increasing of quantity of travellers and focus instead on improving sustainable tourism to mitigate environmental impacts caused by too many visitors.

Tourism is a key component of the economy, accounting for about a fifth of gross domestic product by some measures. Piphat said he was sticking to a recently-lowered target of 39.9 million arrivals but declined to comment on whether Thailand could hit its goal for 3.2 trillion baht in receipts this year. Arrivals in June fell to 2.9 million from 3.03 million a year earlier.

“I will have to speak with the finance minister and the central bank governor on what to do,” Piphat said.

The concern about the baht’s trajectory comes amid a political transition, with the military-led administration that’s been in power for five years giving way this week to a civilian government, albeit one still headed by Prime Minister Prayuth Chan-Ocha, a former general who led a coup.

Piphat also said he wanted to tackle tourists’ concerns about safety, and to promote the industry across the entire nation. “Right now the most urgent item on the agenda is creating faith among tourists that Thailand is a safe country,” he said, adding: “We must encourage tourism in all 77 provinces.”