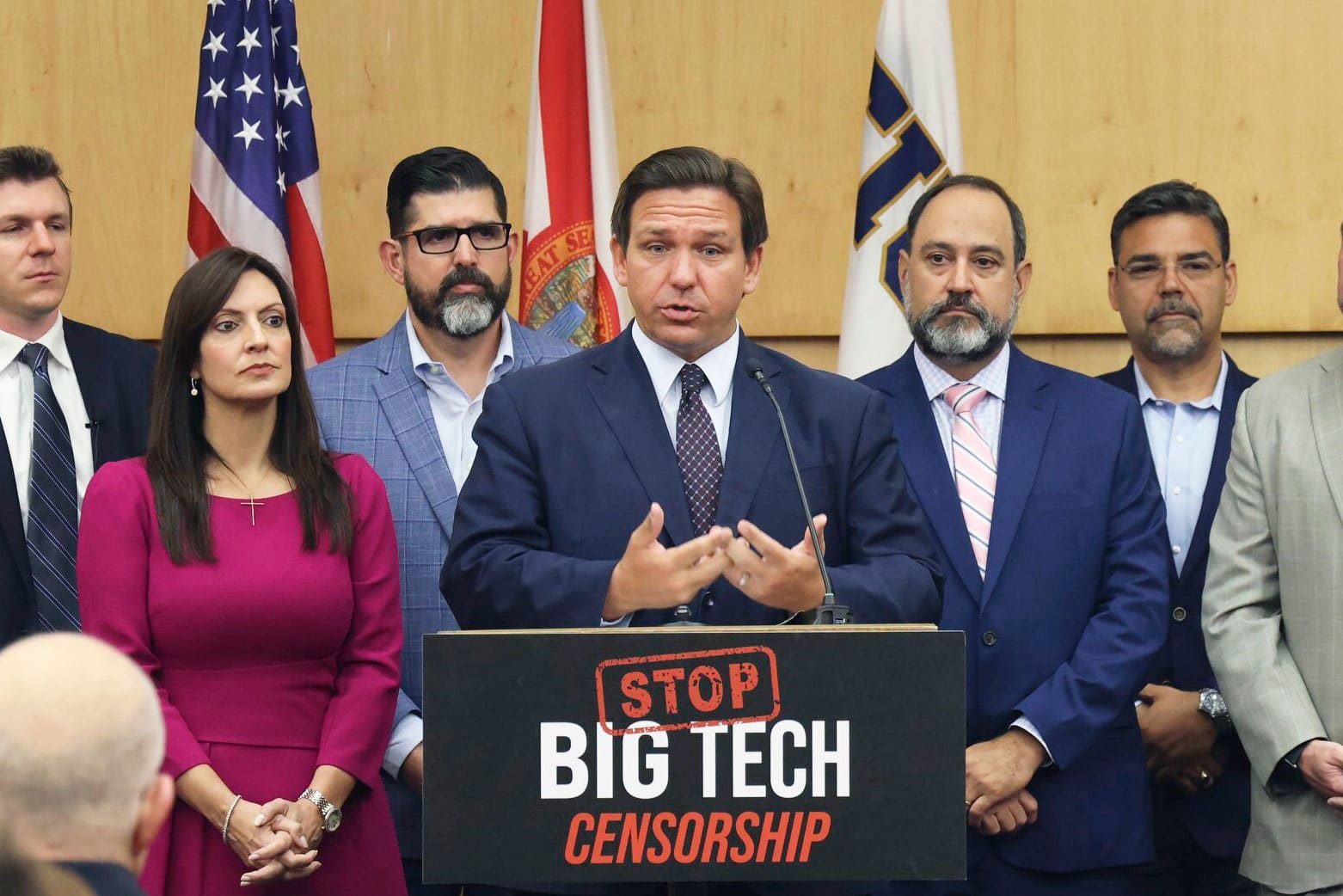 Florida Gov. Ron DeSantis gives his opening remarks flanked by local state delegation members prior to signing legislation that seeks to punish social media platforms that remove conservative ideas from their sites, inside Florida International University’s MARC building in Miami on Monday, May 24, 2021.Carl Juste | Miami Herald | APFlorida Gov. Ron DeSantis on Monday signed a law that gives the state the power to penalize social media companies when they ban political candidates, escalating a fight between the tech industry and Republicans such as DeSantis and former President Donald Trump.The law to prohibit “deplatforming” is the first of its kind in the nation and may be a model for other states to follow, even though one tech business group said the law runs counter to the First Amendment.DeSantis celebrated the law as a blow against “Silicon Valley elites” who he said were seeking to censor conservative political views.More from NBC News:”What we’ve been seeing across the U.S. is an effort to silence, intimidate and wipe out dissenting voices by the leftist media and big corporations,” DeSantis said in a statement.Research on social media has frequently shown the opposite: that conservative politicians and websites can be so effective on social media that they often dominate measures such as Facebook’s ranking of top links. Facebook has also relaxed its rules so that conservative pages are not penalized for violations.Facebook, Twitter, YouTube and other major services blocked Trump shortly after the Jan. 6 attack on the U.S. Capitol by his supporters. Trump violated the terms of service that users agree to when they sign up, including terms that bar the promotion of violence, the companies said.Florida’s law says that social media companies may not “permanently delete or ban” a candidate for office. Suspensions of up to 14 days are allowed, and a service can remove individual posts that violate its terms of service.If a company’s actions are found to violate the law, the state’s elections commission could fine a social media company $250,000 a day for statewide candidates and $25,000 a day for other candidates.Individuals in Florida may also sue for violations of the law, such as failure by a company to be transparent about its terms of service.Companies are excluded from the law if they operate “a theme park or entertainment complex,” a provision that was added to the law to protect Disney’s streaming service, according to Orlando Weekly.A similar proposal is making its way through the Texas Legislature.Carl Szabo, vice president and general counsel at NetChoice, a tech industry trade group, said the law may force platforms to carry posts that include violence or other harmful content.”By forcing websites to host speech, this bill takes us closer to a state-run internet where the government can cherry-pick winners and losers,” he said in a statement. The First Amendment prohibits the government from compelling or controlling speech on private websites, he added.Matt Schruers, president of the Computer & Communications Industry Association, another trade group, said the law is “unconstitutional.”Facebook and Twitter declined to comment on the law. YouTube did not immediately respond to a request for comment. All three are members of NetChoice and CCIA.