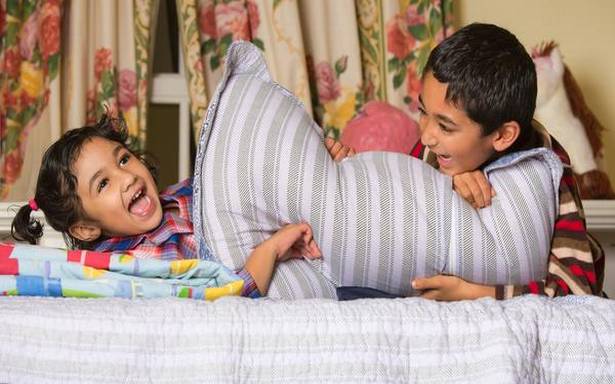 ‘When the World was a Laugh’, an exhibit showcased at Science Gallery Bengaluru’s online exhibition ‘Contagion, assigns a cosmic significance to laughter

According to Japanese mythology, the world was once saved from eternal darkness due to laughter. Amaterasu, the Shinto sun goddess, goes into hiding in a cave after her brother, Susanoo, shames her. Because of this, the world becomes dark and cold. Despite many attempts at persuasion by other gods, she fails to return. Then, Amenouzume, the goddess of dawn, merriment and humour, begins a comical dance. The other kamis (Shinto gods or spirits) laugh uncontrollably. Amaterasu, curious about the laugh, steps out of the cave, restoring the world’s light.French visual artist Anaïs Tondeur’s latest work, ‘When the World was a Laugh, was inspired by this mythology. It is being showcased at Contagion, Science Gallery Bengaluru’s online art and science exhibition.The work features a video of fine powder on a thin surface vibrated by laughter played from speakers underneath. The vibrations disturb the powder, causing a change in the landscape. Anaïs attempts to recreate the formation of mountains. “This is what happens on a geologic scale on a much longer timescale,” she says via a video call from France. Her miniature world is literally shaped by laughter.

The nine-minute clip has different kinds of laughs including cackles, chortles, snorts, snickers, belly-laughs, a chorus of hysterics and even ‘laughter’ of animals and birds. For this project, Anaïs wanted a collection of laughs from different parts of the world. From France she collected over 30 laughs including those of animals from forests and the countryside. “You can argue if the animals were actually laughing. But it is more of our interpretation,” she says. Due to travel restrictions, she could not complete the task in person and asked people to send her recordings of laughter. She got 70 laughs from other parts of the world, including Chennai, Bengaluru, Pune, Durgapur and New Delhi. “We classified this collection according to emotions of colours” — she colour-coded the laughs to make a digital mural — “We also wrote a story from all the laughs we received.”Then, with sound artist Floriane Pochone, Anaïs created a soundscape of laughter. “It was as if we were playing with musical notes but the notes were made of laughter,” she explains, “We are planning to add more laughter.” She also intends to display a physical installation of her work, wherein the audience can record their laughter and see how it changes the topography.Anaïs, in ‘When the World was a Laugh’, assigns a cosmic significance to laughter. But the artwork, she adds, also has the connotations of the pandemic. “Usually my work is related to human relationship with the environment. I work a lot with the atmosphere, the soil, the ocean. For the first time, I was urged to work with human emotions.” Recalling the Japanese mythology that inspired her work, she says, “The movement from the darkness to light due to laughter seemed like a promising image for what we are all going through at the moment.”Register for Anaïs Tondeur’s online workshop for free at eventbrite.com

A look at the Venice Architecture Biennale 2021
Putting Alappuzha on the global art map
To Top
error: Content is protected !!
Top