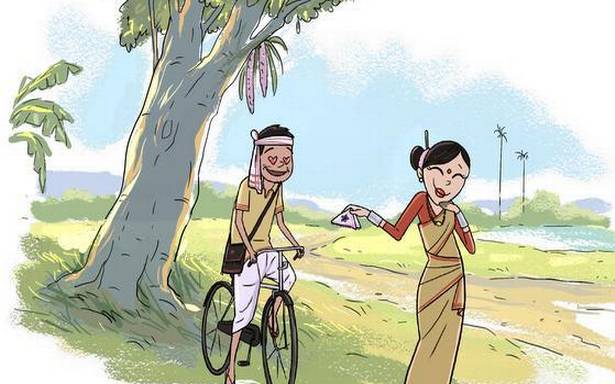 Bihu can be cute too! Using nostalgia as their guide, illustrators in Assam recreate Bihu customs to strike a happy chord

When it is time for Bohag or Rongali Bihu, Assam dons a festive look. The sound of the dhol (drum) and pepa (wind instrument) fills the air. As households get busy preparing pitha, almost every shopping discussion is about fresh til (sesame), gur (jaggery), good coconut and the best quality of sticky rice. This is also the time of the year when non-resident Assamese return to participate in the festival, which transcends religion and ethnicity.The pandemic has dampened spirits and spread a veil of gloom on all festivities, including Bihu. Undeterred, illustrators from Assam are compensating for the loss with illustrations fuelled by nostalgia. The illustrations also introduce children to customs such as the presentation of the Bihuwan, a beautiful handmade Assamese gamusa or a hand-stitched handkerchief to a secret admirer.A perfect 10Pankaj Saikia (@saikiapankaj1990), a Guwahati-based professional illustrator, who created a ten-frame comic titled ‘A Bohagi Tale’, says his inspiration came from what he missed while away from Assam. The self-taught illustrator wants his work to be a window to Assamese culture, food and traditions.“My illustrations are based on childhood memories,” he says. “As a story teller, I wove a tale around them. Some of my previous illustrations on our culture show the essence of pitha. Assamese pitha is losing its identity with experiments in the name of fusion. I did ‘A Bohahi tale’ because I notice children today missing the fun around Bihu — there is more to it than new clothes and a holiday.” Spring in Assam brings a festive cheer, households preparing pitha-pona, dance, music and family/social visits. The illustrations have gained positive response and sparked discussions on culture, nostalgia and stories around bihu-tolis (a place for public gatherings for dance and music).Drums of destinyIllustrator Nilim Mahanta (@mahanta_livingart) from Lakhimpur, Assam, posted a stop motion animation of 100 frames. The animation has a dhulia (one who beats the dhol) creating beautiful beats for a dancer. Nilim shares, “We took four days to complete it and the end result is quite melodious. The dhulia is my friend. We recorded the music first and then worked on the animation. Bihu is incomplete without the dhol and there is nothing more nostalgic or melodious than the dhol to herald the advent of spring or bohag.”Most illustrators say they realised how much they miss the happy buzz and commotion of Bihu when it all went silent last year. People couldn’t stop watching YouTube videos of Bihu music videos and songs.Turn the pageDaakor boson, a page on Instagram, has been actively documenting Assamese culture and rituals. Maitri Das, one of the founders, says though they have been around since 2019, the page garnered a lot of hits since last year. “The Assamese ghost series that got us a lot of followers. That is when I realised there is a lack of documentation of our culture. As we started posting more animated series, the shares started to go up. We did a Bihu illustration about the Bihuwan and for the teaser we highlighted the tradition of husori (where groups of children bihu-dancers visit the neighbourhood).”Amalendu Kaushik, also a founder of Daakor Bason, maintains a personal account for his illustrations on Instagram. “As Maitri and I started work, we realised many details of culture were missing. Our goal is to document and bring about awareness about Assamese culture and traditions. Culture is dynamic and we are looking at collective growth. It is a must that illustrators push each other’s work and keep the dialogue going. I am planning to launch a series showcasing some lesser-known culture and traditions.”Guwahati-based Tarique Aziz posted an illustration titled ‘Anuradha dances bihu’ as part of the illustrations he did for Pratham books. “I followed the storyline, but the inspiration was from my childhood. Bihu was all about visiting home, eating homemade pithas and dancing, irrespective of whether one could dance or not. The series that I posted is about the importance of Kapau phool (garland orchid). I would definitely love parents to use our illustrations to talk about what it means to be in Assam during Bihu.”

Fancy buying a Madhubani painting or a Rogan Art stole from award-winning craftsmen? This new platform might help
Where winged women fly away: The art of Rithika Merchant
To Top
error: Content is protected !!
Top