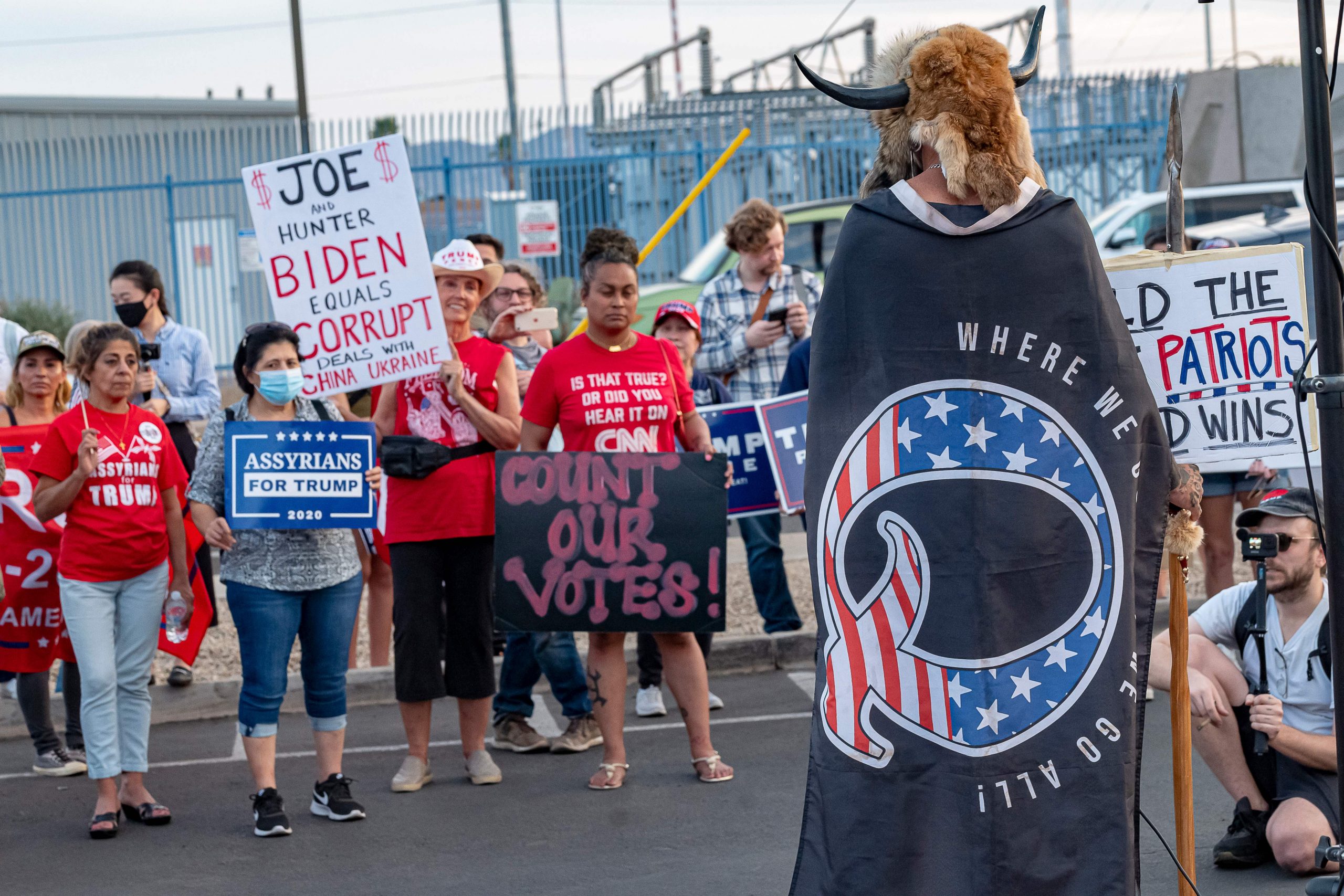 Liesa Norris received a panicked phone call on Monday from her brother. He told her to buy a ham radio.The radio, he explained, would be one of the few ways they could communicate once President Donald Trump launched his plans to take permanent power.”We were dancing around the subject and then he just brought up that on the 20th, you know, the truth is going to come out,” Norris said. “He was just going on and on about how we needed to have ham radios because we’re not going to be able to talk on regular phones, and everything is going to be dark.”Read more from NBC News:Trump has no such plans. But in the now-fractured QAnon community that has turned to a variety of smaller messaging apps and YouTube to keep spreading conspiracy theories, evidence-free reports of a nationwide blackout and impending martial law on Wednesday have become a last stand for true believers who still believe Donald Trump will be president after Inauguration Day.NBC News reviewed the social media accounts of Norris’ brother, and they are part of a sea of QAnon accounts that have become increasingly divorced from reality since the Capitol riots. Most of those accounts have expressed a belief Trump will declare martial law and execute Democrats on Inauguration Day as part of the cult’s long-awaited doomsday.Extremism researchers are calling some of these accounts “Parler refugees,” named after the conservative social media network whose users are stumbling upon increasingly militant and radical information streams on smaller, unmoderated messaging apps and online forums. Parler has been offline since early January after internet service companies cut ties with it. Twitter also banned 70,000 QAnon accounts this month.Meili Criezis, who studies white supremacist radicalization at the Global Network on Extremism & Technology, part of a nonprofit organization that works to prevent extremists from using online platforms, said she noticed explicit recruiting by white supremacist militias of what she called “normie,” or previously nonradical, Trump supporters on Telegram after Parler’s demise.”In white supremacist and neo-Nazi Telegram groups, discussions have centered around strategies to infiltrate pro-Trump chats and ‘red pill’ what they have termed as ‘Parler refugees’ with carefully constructed narratives and propaganda,” Criezis wrote in a recent report. (“Red pill,” in this sense, means to radicalize online users with far right-wing views.)Criezis said militia groups were “really ready for this flood of new users” onto services like Telegram, where they had built audiences of tens of thousands of users before the Jan. 6 Capitol assault.”I’ve seen some Trump supporters kind of fumbling onto Telegram not knowing how to use it exactly, and it was really concerning, because it’s such a huge recruitment pool,” Criezis said.One extremist group on Telegram even created a “red-pilling guide,” which included directions to “strike up friendly conversations with individuals followed by a pre-constructed message” through private messages. The guide tells recruiters to identify with potential targets for radicalization over their support for Trump and shared fear of impending threats, before demoralizing the target into believing the solution is violence.Criezis said the radicalization process often starts in larger militia spaces on Telegram, like one of two groups run by the far-right extremist group Proud Boys “where pretty much anyone is allowed in.””They find the target, then they pull the individual off to the side in Telegram into a one-on-one chat away from that larger group chat, and they try to develop a very personal relationship,” Criezis said. “And that’s where the whole recruitment model of manipulation lives, where they are feeding those ‘red-pill lite’ versions of more hardcore white supremacist arguments.”QAnon followers have retreated to smaller forums where the most popular posts have become exceedingly fantastical and bloody, as followers falsely believe Trump will stage a violent coup on Inauguration Day.Booted from larger social media platforms like Twitter, followers have turned to fake Telegram accounts purporting to be leaders in the Air Force and anonymous 4chan posts claiming to be written by soldiers who are excited to commit armed insurrection.According to Advance Democracy, a nonprofit group that researches disinformation and extremism, calls for and expectations of violence on Inauguration Day dominate the top posts of QAnon forums in the run-up to Jan. 20.One top post on a site named after The Great Awakening, the QAnon doomsday that begins with the mass execution of Democrats, declared: “The death penalties will commence ON DC SOIL.”Norris told NBC News that her brother became radicalized over the last year mostly through YouTube, but that he sounded more urgent this week. In the past several days, he has been posting excitedly about the coming blackout and doling out tips from YouTube tutorials about ham radios and how to survive after what he hopes to be an elaborate, bloody coup by Trump.”They keep pushing the goal posts back when they put all these predictions out,” Norris said. “But he is convinced that the truth is going to come out on Wednesday.”Despite the cruelty at the heart of QAnon, Norris believes her brother was legitimately trying to help.”He was getting a ham radio sent to my dad. His was getting delivered today. He was telling me they were flying off the shelves,” she said. “And I think, last minute, he still thought, ‘Oh, What about my sister?’ even though I didn’t believe it.Subscribe to CNBC on YouTube.