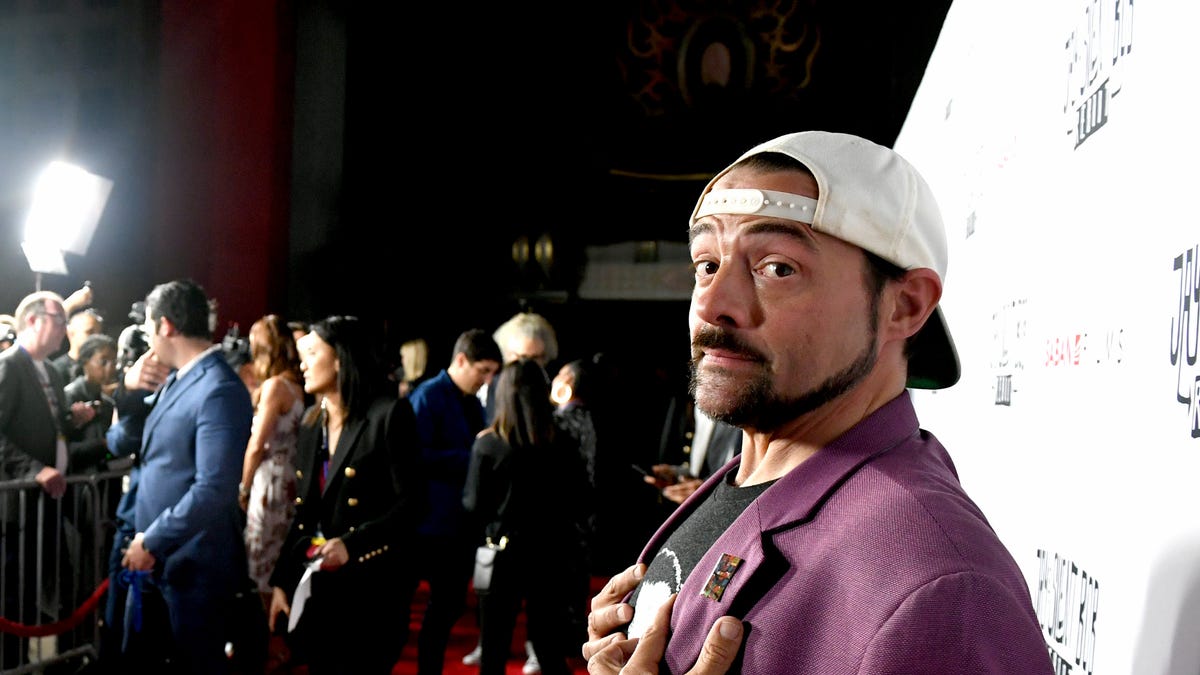 Kevin Smith: ‘I’m honoring the journey that I started’Kevin Smith reflects on his 25-year-career in Hollywood. The writer, director and actor says because he makes specific types of movies, he’s never really judged against any other directors but himself. (Oct. 13)AP EntertainmentKevin Smith knows he is stepping into completely uncharted waters by auctioning off his new film “Killroy Was Here” as a NFT (non-fungible token).The owner of the “Killroy” NFT will secure the rights to exhibit, distribute and stream the completed horror comedy anthology, directed, co-written and co-produced by Smith, making it a potential means for the new owner to earn money outside of the blockchain.”This is a brave, new world. It makes me feel young, like the young artist that came into the business,” Smith, who kick-started his career selling the low-budget “Clerks” at the Sundance Film Festival in 1994, tells USA TODAY. “If this works, the sky is really the limit here. There’s also a chance this whole thing could blow up in our faces.” NFTs are unique pieces of data that verify ownership of a digital item, like a piece of artwork, a video clip or even a tweet. “Everydays: The First 5000 Days,” a digital piece by the artist Beeple, sold for more than $69 million through auction house Christie’s through an NFT in March.Smith makes it clear that the winner of the the “Killroy” auction, which will drop next month on Jay and Silent Bob’s Crypto Studio, will get the completed movie “all ready to go. It’s a turnkey asset.”A guide to NFTs: What are they, and why did someone spend $69 million for one?”Our movie is done, son,” he says. “What you get is the whole movie, with the hard-drive files, in the real world. The completed ‘Killroy’ movie is the NFT. You’re a distributor, my friend. Or you can wheel and deal. They can take it to Netflix. Or someone can buy it and just put it on their shelf and never show it again. That’s a possibility.”Shot in 2018 in Sarasota, Florida, “Killroy” is centered around the World War II “Kilroy Was Here” graffiti phenomena and stars Ryan O’Nan, Azita Ghanizada and pro wrestler Chris Jericho. With a “tight and small crew” and production budget of “less than a million,” Smith was about to start bringing his film into the marketplace through traditional means, when he came across the NFT idea talking to executive producer David Shapiro. The idea started around movie-inspired artwork NFTs, which will also be auctioned off. But then Smith started thinking even bigger, like an actual film.”As they explained it to me, it called to me,” says Smith. “This is a medium that could explode and give other filmmakers like me a place to go. One more place to ply your trade. And in a world where the Arclight Theaters just shut down forever, the old models don’t seem to work anymore.”At the 2011 Sundance Film Festival, Smith announced an auction for his movie “Red State” that closed with him ultimately buying his own film for $20 and saying he would self-distribute (Lionsgate eventually teamed up with the filmmaker).Smith says he will not buy the theatrical rights for “Killroy” (“this auction is real as a raincoat”) and insists the filmmakers are ready to take a financial hit, even with a yet-to-be-determined minimum purchase price.”If it goes low, I’m not going to pull it. It’s part of the gamble,” he says. “But it’s no less of gamble than if I try to sell the movie in the real world.”Regardless of what happens, the “Jay and Silent Bob Reboot” filmmaker is inspired and suddenly the talk of Hollywood again with the publicity-garnering gambit. Smith says his star Jericho called him up and told him, “You’ve done it again.” For a project not on many people’s radar, “Killroy Is Here” talk has gone viral, which will help the film however it’s distributed.”Now it’s very tough to stand out, and doing this creates an instant profile for the movie –suddenly people are aware of ‘Killroy,’ ” says Smith. “Even if someone winds up winning the auction for $1,000 bucks, even if this blows up in our faces, now there’s a giant story attached to it.”Contributing: Alex Biese, Asbury Park Press

Before the pandemic ketchup squeeze: A year of COVID-19 product shortages and the items we struggled to find
Not a joke anymore: Dogecoin, the cryptocurrency created as a spoof, sees its market value top $40B
To Top
error: Content is protected !!
Top