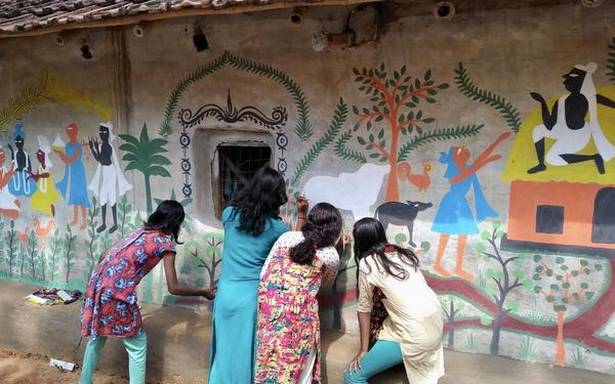 By settling there and teaching its people, he has demonstrated how art is capable of rescuing a neglected human settlement.

Two years ago, Kolkata-based artist Mrinal Mandal was so captivated by the charm of a tiny village — close to where West Bengal borders Jharkhand — that he decided to make the hamlet of some 80 people his second home. In doing so, he has demonstrated how art is capable of rescuing a human settlement from neglect and poverty.“I have been travelling in search of folk art from the time I graduated from the Government Arts College 20 years ago,” Mr. Mandal, 42, told The Hindu. “In 2018, I chanced upon this village, surrounded by forests, and I immediately took a liking for it. I decided to make it a beautiful village by teaching art to its people.”

Today, the residents of the village — officially called Lalbazar but christened Khwaabgram, or village of dreams, by one of the admirers of the project — earn a decent income by selling paintings and handicraft to tourists, whose increasing presence, in turn, has earned it the attention of the local authorities.Tourists come to Khwaabgram, about 4 km from Jhargram, not just to buy handicraft but also to take a look at the village itself, where the walls of most houses are now themselves works of art. “These people are from the Lodha tribe, once outlawed by the British. Traditionally, they are very shy people; if you built a house next to theirs, they would shift elsewhere. It wasn’t easy for me to make friends with them, until I began making drawings related to their life,” said Mr. Mandal, who lives in Jhargram and commutes to Khwaabgram on a daily basis.

Until he arrived on the scene, the villagers mainly worked as labourers in nearby farms and some of them were small farmers themselves. Today, they are trained in kutum-katum (handicraft made from twigs and roots), kantha stitching, pottery and wall painting.“All these years, I survived on whatever little I made from farming,” said Sashti Charan Ahi, 46, who, in spite of a physical handicap, is today successful as a kutum-katum artist. An art form introduced by Abanindranath Tagore, it means making use of found objects.“Every morning, I go out to the forest to collect twigs and branches, then I roam around there for a while to get ideas — should I make a bird today or some animal? People visiting the nearby deer park now often come to our village to take a look and buy our products — that has indeed made our life better,” Mr. Ahi said.

The public attention has led to improved conditions in the village, and what Mr. Ahi wants now is a school to be built there. “My daughter’s school is on the other side of the forest, and I spend a better part of the day taking her there and bringing her back. A school will really help — I believe they are considering the idea,” he said.

Meet this Hyderabad artist who has initiated an Art Yagnam
Enduring love for literature
To Top
error: Content is protected !!
Top