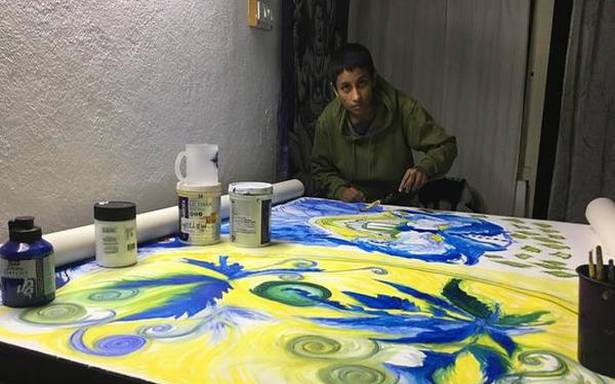 Reshma Valliappan, 40, hopes to create the world’s largest art piece that spreads out across the 180 yards x 150 yards of the world’s largest cricket stadium, the Motera Stadium in Gujarat.Called the Shared Consciousness Project, she describes it as “a search for human connection through art”. Reshma, who has battled several medical problems, including Reye’s syndrome at a year and a half, being diagnosed with schizophrenia at 22, and with scar epilepsy caused by a meningioma (a tumour) in 2011. “In 2011, it was operated upon, but then it came back in September 2019,” she says, adding that the medicines played havoc with her mental health, and she needed to revisit her psychiatrist and neurologist for an adjustment of the medication.

Some months later the lockdown struck, and her world shrunk, because she was cut off from the children she teaches socio-emotive sex education too, in two Government schools in Pune. “Before, I would get to school no matter how, even if I couldn’t drive. This was the joy I got with the children.” These children, living in the most high risk areas, surrounded by people who were in jail for heinous crimes, were themselves prone to violence. “We don’t know where many of them are today, though some are still in touch,” she says, recounting an incident on Teachers’ Day, when the students struggled to collect ₹10 to buy her a chocolate.As the lockdown progressed, she realised that many people were suffering with mental health problems. On Instagram, she asked people to tell her the first thing on their minds. “I had a person send me an emoticon of the brain, because she had a brain tumour. I sketched it out in charcoal and tagged her. She flipped in a good way. It meant something to her that somebody else was creating her story that she couldn’t create.” Thus the idea of a larger project, where people could share their art came up. “I want to make a statement and to be recognised as someone with schizophrenia who is doing this. Even today, there’s discrimination, so this is a political statement,” she says of the stigma that those with mental health problems face. “I’d figured if I was going to create art, I’d do it to uplift and enlighten.”

The project will take three years, with each year dedicated to a theme: year 1 is the Circle of Life, year 2 is the Tree of Life, and year 3 the Tree of Knowledge, both a continuation of her own earlier work titled Trees of Eden: The Year I Ran Away from Home. In it, she depicted the Tree of Knowledge and the Tree of Temptation, between which was a bridge with a child cycling on it.She aims to complete 1,512 roles of canvas, each roll measuring 5×32 feet. “The first year I will do 504 rolls, across multiple themes,” she says. She picks an element or the whole of the art that people send her, interprets it in her own way, and credits them for that piece. She spends about 15 minutes with each submission, and in the initial days of the project would paint for up to 20 hours, “until my dad said, ‘You’ve got to sleep’.”How the Shared Consciousness Project will workPeople, especially those with mental health conditions, are invited to share their artwork/craft/photographs/music/calligraphy/performance with Reshma at vajristudios.art/sharedconsciousness.They can pick across themes: identity/labels, fears/failures, hopes/dreams, pain/pleasure, death/birth.The performance arts will be a part of the visual presentation when the final display takes place, at the Motera Stadium, she hopes. Her father in fact had encouraged her to take up art when she was on heavy medication, sleeping through the day, and when she was at her lowest point. “I remember walking into the kitchen and saying I was hungry,” a sign of some normalcy. “My father immediately asked my sister what I had been doing, and she said, ‘She was painting’.” Thereafter, he plied her with paint supplies and she took it up seriously, soon turning it into a profession.In the first year Reshma hopes to make it through to the India Book of Records, and then to the Guinness World Records.