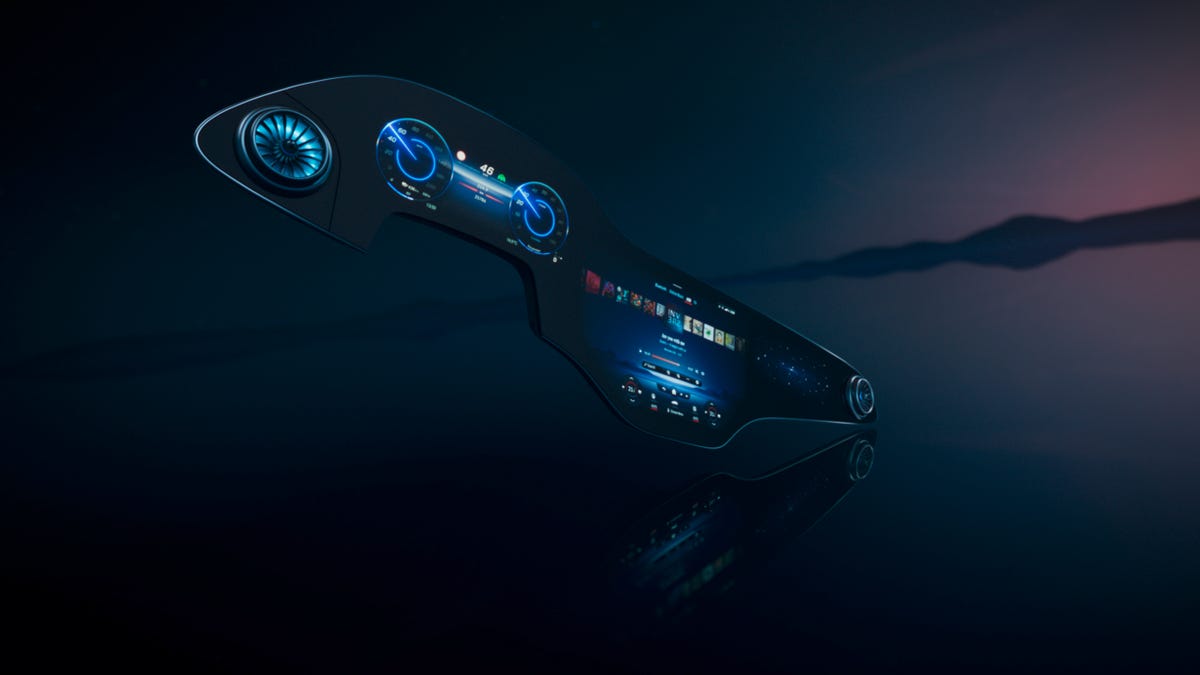 Screens in vehicles are getting bigger and bigger.But is that better?German automaker Daimler’s Mercedes-Benz revealed a new 56-inch screen nearly spanning the width of an entire car this month, becoming the latest brand to bet on larger-than-ever digital displays.The Jan. 7 announcement came as other car brands like Tesla, Ram and Toyota turn the dashboards and instrument panels of certain new vehicles into a sort of Apple store.Gone are the days of playing-card-sized screens causing drivers and passengers to squint their eyes at low-resolution text and poorly designed graphics.Welcome to the era where the screen is king, and analog buttons are facing the guillotine. “It seems like screens in cars are taking after screens in homes,” said Jessica Caldwell, executive director of insights at car-research site Edmunds. “We never thought screens would get this large.”Mercedes-Benz debuts Hyperscreen: a 56-inch curved screen inside new electric carConsumer Reports: These are the 10 most and least reliable 2021 cars, trucks and SUVsBut safety watchdogs have raised concerns that bigger screens can distract drivers, especially if they’re hard to use.“There are already some studies that indicate significant driver distraction can be a result of in-dashboard screens,” Jason K. Levine, executive director of the Center for Auto Safety, said in an email. “The question is, by making them bigger, wider and more integrated with the vehicle, does this make an existing problem worse?”For example, a 2019 study by AAA found that the design of in-vehicle infotainment technology’s voice commands, software menus and center consoles was often distracting – and especially so for older drivers.The federal government’s National Highway Traffic Safety Administration, which regulates vehicles, has raised a red flag about driver distraction, but has not rolled out federal standards to limit it, Levine noted.”Which means there’s always likely to be at least one manufacturer who will be willing to push the limits to get that ‘wow’ factor,” Levine said.The Mercedes-Benz HyperscreenThere’s certainly a “wow” factor with the Mercedes-Benz Hyperscreen.The screen should debut this year in its new electric sedan, the Mercedes-Benz EQS, Daimler said.The EQS is billed as the luxury automaker’s finest electric car and is expected to compete directly with vehicles like the Tesla Model S and Porsche Taycan. It will be sold as a 2022 model and while a starting price hasn’t been announced, Edmunds estimated a $110,000 price tag.The car has a curved-panel OLED screen that includes digital instrument clusters, a touchscreen on the center console and a high-tech display that can show movies to the front-seat passenger in markets where that’s allowed. The panel curls around analog air vents to maximize screen capacity.Daimler Chairman and CEO Ola Källenius said the Hyperscreen was specifically designed with advanced voice commands and eye-tracking technology to ensure that drivers keep their focus on the road.”We’re (using) technology to make sure that driver distraction doesn’t happen,” he said. For example, if you take your eyes off the road to watch the movie on the front passenger’s portion of the screen, the system is programmed to automatically shut off the film. Once the driver’s eyes hit the road again, the show resumes.”It’s so intelligent that it can distinguish between watching the movie and (looking at) the right mirror when you maybe want to change lanes,” Källenius said.Screens come and don’t goAutomotive industry experts largely agree that Tesla kick-started the trend of large tablet-style infotainment screens in vehicles with the Model S ultra-luxury sedan. It continued the strategy with its Model Y SUV and Model 3 sedan, replacing most conventional buttons with a digital display that can be updated via over-the-air software updates.In the years since, other automakers have begun embracing screens, as well. When it rolled out the redesigned Ram pickup in 2019, Fiat Chrysler equipped the vehicle with a 12-inch touchscreen, which is about the size of a laptop.When it debuted the Toyota Prius Prime in 2017, Toyota began offering a nearly 12-inch screen on upgraded models. But it’s Tesla that’s still widely identified with big screens, for better or worse. When engineers recently released a software update, some Tesla owners complained that buttons were confusingly rearranged.”Definitely a distracting downgrade – wish I could go back,” one user posted on a Tesla forum message thread titled, “New Display Layout is Horrendous.”Tesla did not respond to a request seeking comment.Displays on doors?Automakers are expanding screen size in large part because customers want to mirror their consumer electronics experience in the vehicle, said Stephanie Brinley, principal automotive analyst at research firm IHS Markit.”People like them basically,” she said.For an automaker like Mercedes-Benz, a bigger and better screen might be the most efficient way to grab the attention of potential buyers who have a bevy of other attractive options.”It’s just not enough to offer cool features anymore because you can get a touchscreen and heated seats in an inexpensive Kia,” said Brian Moody, executive editor of car-buying site Autotrader. “So what’s pushing this (trend) is there has to be serious and identifiable differentiators.”Moody predicted that automakers will go further, perhaps even by incorporating screens on the sides of new vehicles.”Imagine having art or video screens on the door panels,” he said. “All those things I think are yet to come.”Automakers are increasingly embracing screens in part because it allows them to update their vehicles over time, something that Tesla essentially pioneered.”As automakers get over-the-air updates even quicker, you have the opportunity to make changes to what that (screen) looks like over the life of the vehicle,” Brinley said.Follow USA TODAY reporter Nathan Bomey on Twitter @NathanBomey.

‘Social Security is your retirement income anchor’: When to claim, explained
30 of the best MLK Day sales and deals to shop
To Top
error: Content is protected !!
Top