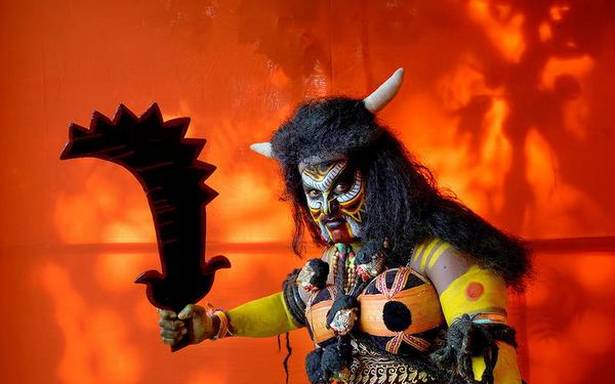 Images of Encounter, a photography show, rallies lensmen from across the globe to share their unusual encounters

“Virtual collaborations and exhibitions are avenues to bring artists together at this time,” says Abul Kalam Azad of the Tiruvannamalai-based Ekalokam Trust for Photography (EtP). Along with co-founder Tulasi Swarna Lakshmi, he has conceived and curated a year-long online photography exhibition called Images of Encounter (www.imagesofencounter.com). Online since September 15, this event showcases the work of 29 artists from around the world. The focus of each work is on unusual encounters in an artist’s life.Thus, a vast and varied mix of images captures a range of emotions and touch upon political and social contexts in a witty, sarcastic and direct manner.

American frontline photographer Robert Nicklesberg’s black-and-white photographs taken with a Mamiya 7 medium format camera were created in 1997 during the 50th anniversary of Indian Independence. He travelled to both sides of the border to photograph and interview people affected by Partition. “I had the feeling that the earlier, and possibly future conflicts between India and Pakistan were not part of the daily concerns of people living in these remote areas.”On Either Side of the Window displays Lebanese-American photographer Rania Matar’s pandemic-inspired images of house-bound people against their windows. “As the new normal settled in, the portraits started transforming; with the window almost acting like a stage and the people inside becoming active participants in the photo session.”

Chinese photographer Xiangjie Peng’s Dwarf Empire series taken in Kunming village in Yunnan province (China) is about the lives of the vertically-challenged people there.Renowned British photographer Martin Parr, known for combining wit, satire and critique in his images, presents his encounters with the selfie-obsessed generation.Veteran political photographer Ram Rahman is pleased with the mix of names, especially from the South. He has displayed his encounters with political figures. “I am interested in the theatre of politics — both as it plays out in real life and in the visual graphics of our fantastic street life. Other aspects of street images are magical and fantastical but all speak of a cultural imagination which the camera can capture beautifully.”

Kozhikode-based Arun Inham, has amalgamated paintings, sculpture and photography in his series. While Abul has chosen to exhibit from his Senti-Mental, an amalgamation of analog and digital photographs, the series invokes the correlation of time, memories and history.Post COVID-19, Abul has plans to collaborate with other galleries and also organise Images of Encounter as a print exhibition.(the show can be accessed at www.imagesofencounter.com)

Face-to-face with art, finally
Virtual show ‘A Letter from My Homeland’ is a photographic tribute
To Top
error: Content is protected !!
Top