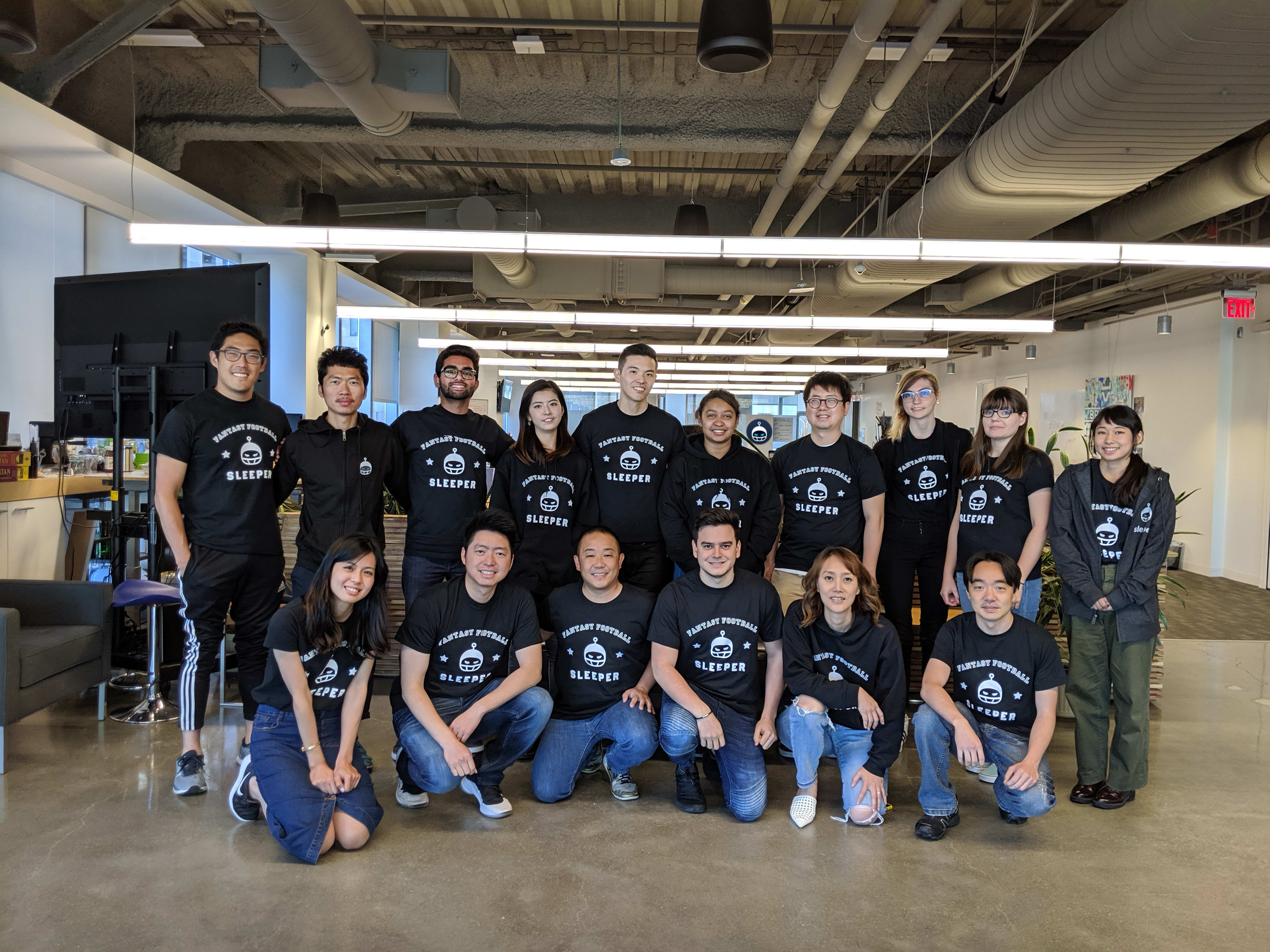 Sleeper is a San Francisco fantasy football startup that is taking on ESPN and Yahoo.

She’s always happy to attend Super Bowl parties, but that’s about it. And yet, Yen is the director of product design at a 16-person San Francisco fantasy football start-up called Sleeper.

“I look at Yahoo and ESPN, and I realized that even though I don’t know about it, this is for hardcore fans only,” Yen said. “I feel like they build a wall to keep the woman, female audience out.”

That’s why Nan Wang, the CEO of Sleeper, hired Yen and her all-female team to design the look and feel of his company’s website and app. Appealing to women, casual fans and first-time fantasy players is critical to Sleeper’s strategy.

This more inclusive approach has informed features that Sleeper hopes set it apart, including the color coding of player stats and a simplified league set-up process that can be done in 30 seconds.

“The only way you can do that is to think outside of the box,” said Wang, highlighting that nearly half of his employees are women and most of the employees don’t really watch sports. “We consciously made that hiring decision.”

In fantasy sports parlance, a “sleeper” is an under-the-radar player that has the potential to outperform his more established counterparts. That’s how the start-up sees itself in taking on Yahoo and ESPN.

“We feel like we’re that breakthrough talent,” Wang said. “We’re the underdogs in this space competing against some big names, but we have the right talent to do so.”

The start-up also chose the name because it was gender neutral and welcoming, Wang said.

“We saw a lot of other sports companies come out of the gate with names like ‘Draft Monster,'” Wang said. “We thought a lot about inclusivity. Even our icon is half cute, half sporty.”

But Sleeper has a steep hill to climb.

The start-up announced that it raised a $5.3 million series A round of funding earlier this month, bringing its total funding to $7.3 million. Sleeper claims to have grown its user base between 700% and 900% year to year since launching in beta in 2017, but it would not tell CNBC how many users it has.

By comparison, more than 1 million women played ESPN fantasy football in 2018, according to a source familiar. And Yahoo Fantasy Football had more than 7 million registered users. In total, the fantasy sports market is estimated to be worth $7.22 billion with fantasy football the favorite game among players, according to the Fantasy Sports and Gaming Association.

“At Yahoo Sports we are proud of our inclusiveness that is reflected in our staff as well as in our audience,” a Yahoo Sports spokeswoman told CNBC in a statement. “We remain the most accessible major fantasy app available on the market today, and we continue to innovative and bring new games to our fantasy platform for all users.”

This year, the company has introduced team mascots, which are animated characters that players can buy for between $5 and $20 to represent their teams and taunt their opponents. The mascots are a feature unique to Sleeper, but they are also the start-up’s first stab at making money.

Sleeper tells users it is committed to running an ad-free service, so it’s turning to payments instead. It’s the same business model as Fortnite Battle Royale, the free online game that makes money by charging users for accessories to customize their characters.

“We know that people love to accessorize their experience via skins and avatars, and it’s pretty lucrative in the e-sports world,” Wang said. “Sports fans are no different.”

The start-up is also beginning to be more tactical about its marketing to users. In past seasons, Sleeper has allowed the app to grow by word of mouth and by engaging with users on Twitter and Reddit. This season, however, the company partnered with Juju Smith-Schuster, star receiver of the Pittsburgh Steelers.

Smith-Schuster is the first NFL player to partner with the start-up, and earlier this month, he held a celebrity draft, along with actor Zac Efron and popular video game streamer Ninja, among others.

“I’m all about doing things differently and being on the new trends as they come up,” Smith-Schuster told CNBC in an email. “I see Sleeper as being one of the biggest platforms for sports fans in the future.”

The company is also laying the groundwork to expand into other sports in 2020. Sleeper will offer a product to cater to college basketball fans in time for March Madness, and it plans to offer fantasy games for the NBA and the English Premier League in 2020.

Fantasy football is the launching point, but Sleeper’s long-term goal is to become the hub where sports fans — both hardcore and casual — can connect. For Yen, the grand vision is to design a product so simple that a Sleeper user could play fantasy sports against their grandmothers and talk about players like New York Giants running back Saquan Barkley.

“She could ask ‘Oh Saquan Barkley, did you see how he’s playing?'” Yen said. “What a cool grandma saying that and chatting about that on our platform. That’s what we dream of.”

WATCH: DraftKings CEO on how legalized gambling will change the industry