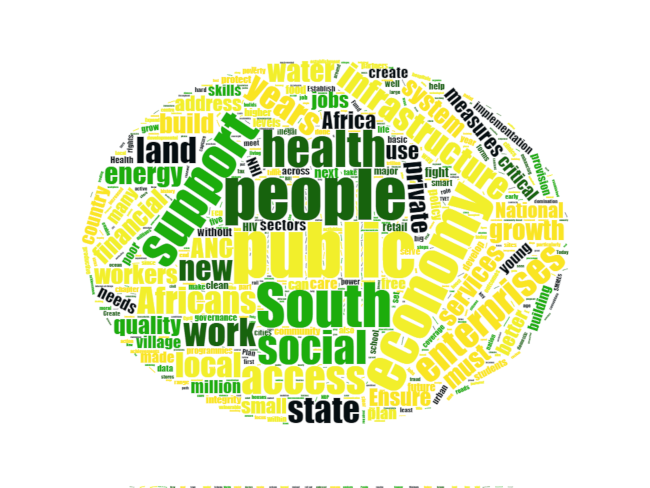 A great deal depends on this week’s election for the three largest parties in the country.

The African National Congress is in a fight to regain the trust of its traditional supporters and South Africans in general after a nine-year period that its own President Cyril Ramaphosa called “wasted years”.

The Democratic Alliance, for the first time in a decade, will be challenging an ANC leader who is not up to his waist in legal scandals.

And after an eventful first five years in Parliament, the Economic Freedom Fighters continue on their mission to set the country’s political agenda, driving the ANC further to the left where it can and forming alliances with the DA in the 2016 local government elections.

On the election campaign trail, South Africans have heard politicians say a number of things for that all-important vote. Some of these things may be true, false, wishful, or simply bizarre.

This past weekend, the DA was the last of the three largest political parties in the country to release its election manifesto at the Rand Stadium in Johannesburg.

Below are some summaries of what the three largest political parties in the country are promising their voters, with associated word clouds – where the size of the respective words indicate their priority in the manifesto and/or the number of times they appear in the document.

The manifesto acknowledges that the growth of the economy is too slow to realise the aspirations of South African society, much less the scenario envisioned in the National Development Plan, which states that the country needs 5% economic growth yearly to raise employment and eradicate poverty.

“Our plan is to draw more South Africans, particularly youth and women, into decent employment and self-employment. Much work still needs to be done to promote decent work,” the manifesto says.

The manifesto hints at using the development of early development centres and expanded public works programmes to address the challenge. It also mentions removing barriers such as the work experience requirement for young job seekers.

The gut check for the governing party will likely come when it’s time to deliver on their manifesto promise to “take decisive action against state capture and corruption in public institutions and state-owned enterprises”.

Reforms such as changing the Constitution to allow for the expropriation of land with no obligation from the state to compensate previous land owners are also mentioned.

The ANC believes the South African Reserve Bank work includes pursuing “a flexible monetary policy regime, aligned with the objectives of the second phase of transition”. 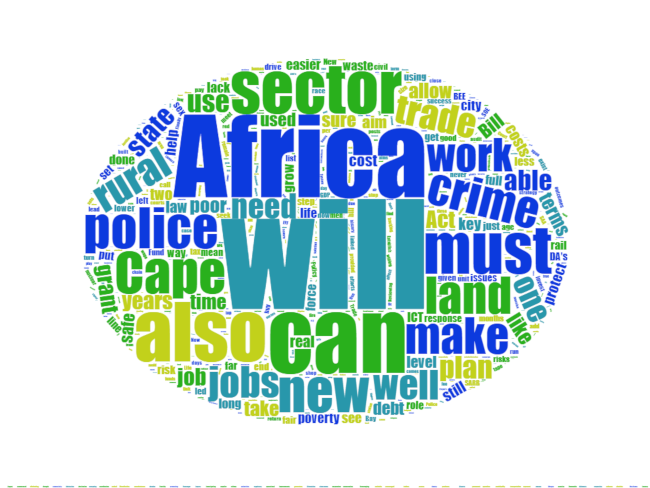 The DA’s overall stance in its election manifesto has been to challenge the ANC regarding the governing party’s talk of renewed commitment to the benefit of the South African economy and society.

On economic growth, the DA pledged in its manifesto to provide the private sector with policy certainty with a compelling incentive to invest in South Africa.

“To realistically turn our economy around and reduce unemployment, we must place the economy on a trajectory toward realising 3% GDP growth, at least, annually,” said the DA manifesto.

The DA also reiterated its commitment to rejecting of expropriation without compensation, saying that this was not necessary to kick-start the economy or create jobs.

To address Eskom’s troubles, the DA suggests that an independent state-owned body must buy electricity from electricity generators as a wholesaler and, in turn, sell that electricity to distributors and customers at a wholesale tariff.

Corruption is another prominent part of the DA manifesto, as the official opposition has pledged to disband the Directorate for Priority Criminal Investigations (Hawks) with a new anti-crime unit. 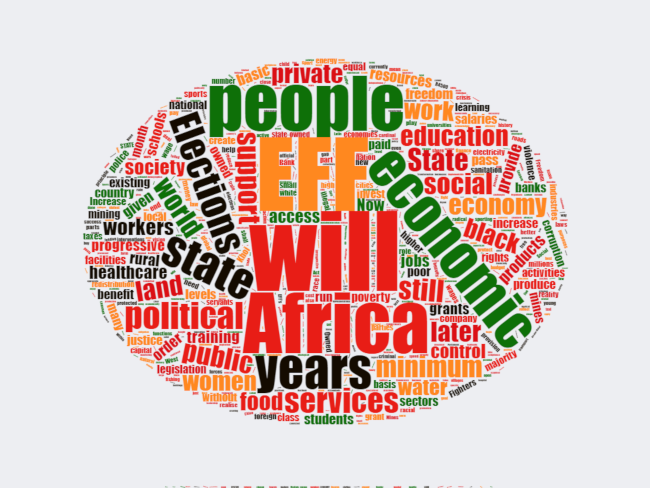 The third-largest party in the country in terms of voter support made an impressive splash in the 2014 elections, getting 6% of the vote.

This time around, the party’s manifesto mentions expropriation of South Africa’s land without compensation, the nationalisation of strategic sectors of the economy, the abolition of tenders and protected industrial development to create jobs.

Other reforms the party recommends are minimum wages in order to close the wage gap between the rich and the poor, and for the state to intervene and participate in industries to create a sophisticated and advanced economy in South Africa and on the continent.

“The EFF government will prescribe clear and concrete developmental mandates and objectives to all state-owned enterprises, which will be gauged by their ability to deliver quality services and goods, the number of jobs they create, and the speed at which they expand the qualitative and quantitative capacity to provide better services,” the manifesto said.

Other than abolishing the tender system, the party’s manifesto suggests a state administration court, established to address state capture and corruption at government departments as well as state-owned entities.

Transnet chair Popo Molefe set to take the stand at state capture inquiry
South Africans ask Google who to vote for and if the EFF will win
To Top
error: Content is protected !!
Top