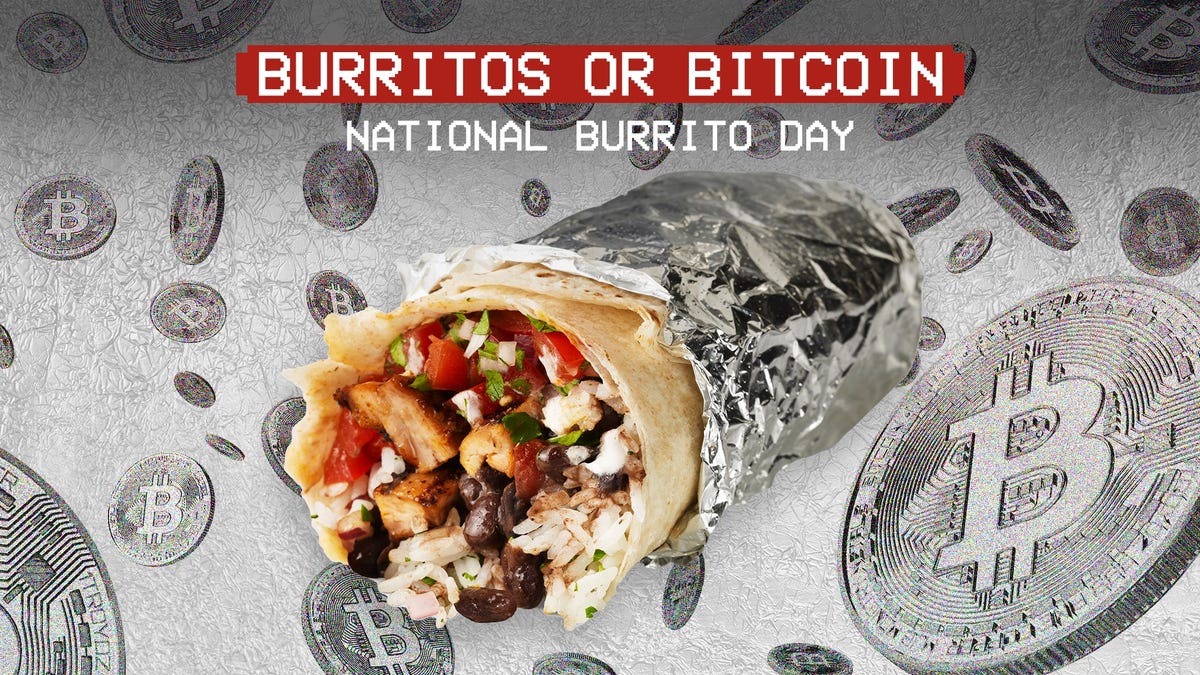 Chipotle gives away free burritos and Bitcoin for National Burrito DayChipotle to give away free burritos and Bitcoin for National Burrito Day through interactive game, “Burritos or Bitcoin.”Staff video, USA TODAYThis is not a joke: National Burrito Day and April Fools’ Day fall on the same day this year. The day of pranks and burrito deals is Thursday and while Mexican food chains aren’t exactly going the whole enchilada, the day hasn’t been canceled like other food days during the COVID-19 pandemic, including Free Cone Day and 7-Eleven’s Free Slurpee Day.Burrito Day is held annually on the first Thursday of April.Thursday also is the first day of IHOP’s revamped National Pancake Day promotion for those who joined the chain’s email club by March 31. Throughout April, members get a free short stack of pancakes.Save better, spend better:  Money tips and advice delivered right to your inbox. Sign up hereUnlike last year, when Chipotle Mexican Grill held a free queso promotion, this time it’s giving away $100,000 in free burritos and $100,000 in Bitcoin through the “Burritos or Bitcoin” interactive game at www.burritosorbitcoin.com. The game runs from noon to 9 p.m. EST Thursday.Each player gets 10 tries to guess a correct six-digit passcode for a chance to win a free burrito or up to $25,000 in Bitcoin.Reviewed recommendations: 15 silly gag gifts for April Fools’ DayLowe’s free gardening kits: Lowe’s plans ‘SpringFest’ event with free curbside ‘Garden-to-Go’ projects for families. How to sign upAccording to the fine print, no purchase is necessary to enter and the contest is open to legal residents in 50 states and Washington D.C. who are 18 or older. Among the prizes: 10,000 fans will win one free burrito, 50 win $500 in Bitcoin and three win $25,000 in Bitcoin. Losers also could end up with a special offer, Chipotle said.Burrito Day free food and dealsHere are the deals available at participating locations Thursday. To be on the safe side, check with your closest location before heading out. Some offers will require you to have a restaurant’s app or be signed up for emails.Chipotle Mexican Grill: The chain has its “Burritos or Bitcoin” interactive game at www.burritosorbitcoin.com. Also, earn rewards throughout the year with the Chipotle Rewards loyalty program.Del Taco: Buy one Epic Burrito Thursday, get a second free with a purchase on the chain’s app. Registration is required to access deals. El Pollo Loco: Buy a burrito, get a second free Thursday. Plus, loyalty members who purchase a burrito with their Loco Rewards account will receive a free burrito coupon for Thursday and a second free burrito coupon to use in the El Pollo Loco mobile app anytime in April. Freebirds World Burrito: Order Freebirds on Grubhub and get $7 off orders of $20 or more Thursday. Select other Mexican restaurants are also offering a similar promotion on Grubhub Thursday.Maverik Adventure’s First Stop: Get a $1 off all burritos Thursday Plus, 5,000 loyalty customers will get a free burrito added to their digital app. Check Thursday to see if you received a freebie. Moe’s Southwest Grill: Moe’s will have $5 burritos and bowls Thursday. The chain says no coupon or membership needed to get the deal.Qdoba Mexican Eats: While not a National Burrito Day deal, the chain is offering free delivery on March Madness game days, Saturday to April 5 with a $15 minimum.Rubio’s Coastal Grill: National Burrito Day is a two-day celebration at Rubio’s. Save $2 on any burrito on the menu Wednesday and Thursday with coupon code MKTG1068 on the app or website. In restaurants, show a coupon at www.rubios.com/coupons/national-burrito-day.Taco Bell: New Taco Bell Rewards members can get a free Doritos Locos Tacos via the app for a limited time. Also from Thursday through April 5, there will be Chalupa Cravings Box buy-one-get-one offer via Uber Eats.Taco John’s: Get the chain’s Grilled Chicken Boss Burrito or Bowl for $5 Thursday with an offer in the chain’s app. Tijuana Flats: Loyalty members get double points on “Throwback Thursdaze burritos” Thursday. The weekly Throwback Thursdaze promotion includes a burrito, chips and a drink for $6.49. To get the double points, create an account before 7 p.m. EST Thursday in the Tijuana Flats Rewards app or at www.tijuanaflats.com/rewards.More deals: Some local restaurants and smaller chains also will celebrate National Burrito Day with specials.Krispy Kreme vaccine giveaway: Free donut and coffee offer on Mondays – no COVID vaccination requiredPet food recall: Select Midwestern Pet Foods’ dog and cat food recalled for potential salmonella riskFollow USA TODAY reporter Kelly Tyko on Twitter: @KellyTyko