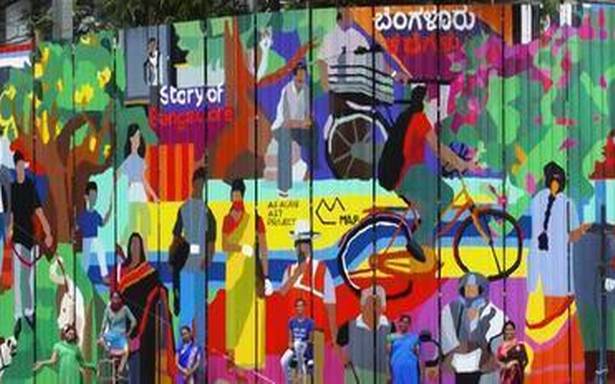 Bengaluru’s Museum of Art and Photography now sports a large, colourful façade featuring elements that make the city what it is

There is a new addition to the Bengaluru cityscape. The façade of the Museum of Art and Photography (MAP) on Kasturba Road, which is under construction, has been transformed into a large, colourful mural. The project was brought to life over 10 days by Aravani Art Project, a city-based cis and transwomen art collective. The artwork titled Story of Bangalore or Bengaluru Kathegalu, features the myriad people that make the bustling metropolis: from the morning walker and the pourakarmika to the traffic policeman, complete with orange reflector jacket. Says Kamini Sawhney, director of MAP, “We are a museum that is located in Bengaluru, and it is so important to connect with the community. We have been doing this over the last two years with education programmes, talks and so on. Once COVID-19 happened, things came to a standstill but we decided that this artwork was a good way to tell Bengaluru that we are here. I also think that the two important pillars of MAP are inclusion and accessibility and this project conveys that message.”Stating that the concept was decided after brainstorming with the Aravani team, she says, “The important points that came up were that this is essentially a garden city that still has beautiful trees and flowers, despite all the development. So, the mural has trees and flowers. Then we decided to have a building that identifies with Bengaluru so you have the High Court in Cubbon Park.”“Then you have walkers, children and dogs. The building has been designed in such a way that it is accessible to all. So, there is a child in the corner in a wheelchair, almost at the MAP entrance. COVID-19 has affected our societies tremendously, so you can see masks and frontline workers too. Everyone has included something that they felt was important to the story of Bengaluru.”The people in the mural remain faceless, painted in different shades of brown. The idea being, “it could be you”.