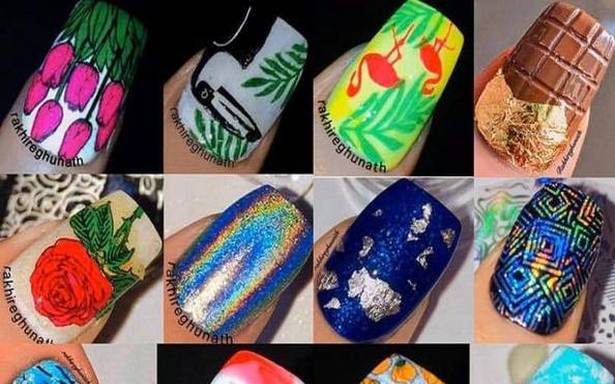 For Rakhi Giri Sankar from Thiruvananthapuram, a fingernail is as big a canvas for creative expression as any other. With meticulous strokes, the artist loves to conjure up beautiful works on a range of themes on nails. “If I’m given a canvas painting, I can replicate the same on a finger nail,” she says.Rakhi’s nail paintings feature scenic landscapes, intricate floral designs and miniature portraits of iconic figures, apart from theme-based 3D works, like the one depicting a snail on a beach. On Independence Day, she portrayed a series on national personalities such as Mahatma Gandhi, Netaji Subhash Chandra Bose, Mother Teresa and Gautama Buddha.The engineer says she is a self-taught nail artist. She quit her job with a corporate firm a few years ago to dedicate herself to her passion, and that it was by chance that she tried her hand with this technique. “In 2016, when I was working in Coimbatore, I first came across fingernail art from a colleague of mine who had visited South Korea for on-site work. She had got done some floral patterns on her nails. I had done a bit of painting since childhood and this decorative nail art fascinated me. I started exploring more,” she recollects.

Rakhi then went on a quest to learn painting techniques from YouTube videos and online tutorials. “I bought the necessary tools and practised the techniques during my free time. Incidentally, a friend of mine from the US gifted me a handy acrylic paint set and started working with it,” says the Pathanamthitta native. She adds with a laugh that she “needed nails” to hone her skills and got her roommates and friends in Coimbatore to sit for her. “Once I was home (in Kerala), my relatives lent a helping hand. I was driven by their encouragement,” she says.After gaining experience and confidence, Rakhi started an Instagram page, (nailart_swagger), to showcase her nail artworks. “Later, some members of the nail artists’ community, Polish Buddies, had noticed my works and I was added to their WhatsApp group. This helped me gain more exposure in the field and provided an opportunity to do collaborative artworks with overseas artists,” she explains.

Soon, she started getting enquiries from customers for nail painting. In 2019, she got married and moved to Thiruvananthapuram and started conducting workshops in the art form and opened a studio at home. Rakhi has collaborated with celebrities like actor Ahaana Krishna for her get-up in the Tovino Thomas-starrer Luca.Rakhi points out that she typically takes two to three hours for a work depending on the detailing. Sometimes she keeps a template for the drawing; at other times she works impromptu. Though she prefers to use real fingernails as her canvas, she also works on false nails. “The medium is usually acrylic paint and nail polish though I sometimes employ sculpture gel as well,” says the 29-year-old, adding that her tools include a detailing brush, nail drill and UV light-based nail curing lamp. First, the cuticle is carefully and safely removed before a transparent base coat is applied for protection of the nail. A white base is then applied on which the painting is done. Rakhi says her artworks last for two or three months before starting to fade.