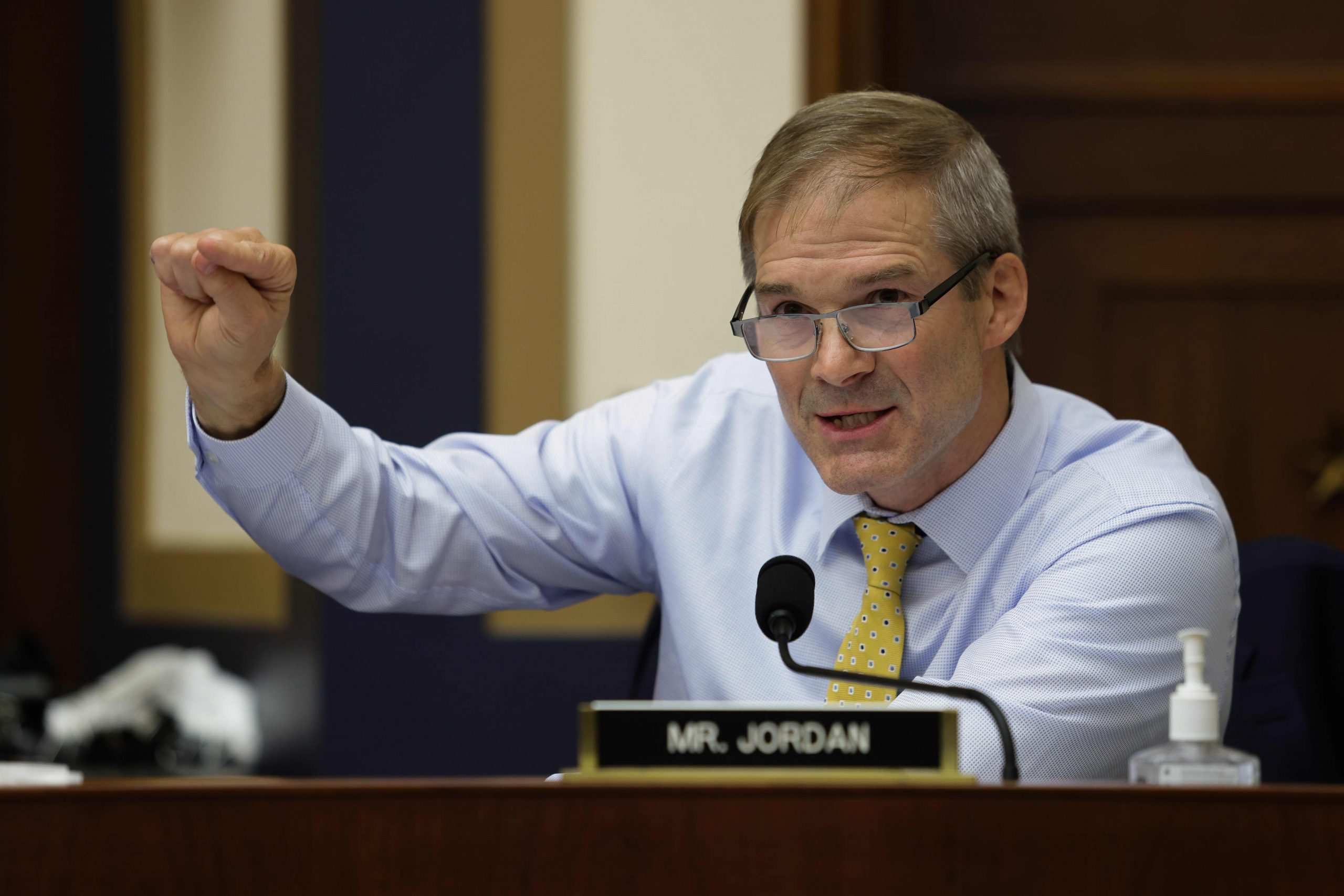 Congressman Jim Jordan (R-OH) speaks during an Antitrust, Commercial and Administrative Law Subcommittee hearing on “Online platforms and market power. Examining the dominance of Amazon, Facebook, Google and Apple” on Capitol Hill on July 29, 2020 in Washington, DC.Graeme Jennings | Getty ImagesRep. Jim Jordan, R-Ohio, the top Republican on the House Judiciary Committee, is shining a light on Microsoft as the committee prepares to mark up a series of antitrust bills based on a tech investigation that excluded the software giant.In a letter obtained by CNBC dated Monday, Jordan asks Microsoft President Brad Smith whether the company would be considered a “covered platform” under the antitrust bills introduced June 11 by a bipartisan group of lawmakers.The package of five bills, set to be considered by the full committee Wednesday, follows an investigation by the panel into Amazon, Apple, Facebook and Google. The bills would reshape antitrust laws in ways that would have clear impacts on those four businesses.But the impact on Microsoft is less clear, especially since it was not a distinct target of the investigations. Smith even spoke with lawmakers on the panel during the probe, The Information reported, sharing Microsoft’s experience of being the target of an antitrust case and discussing Apple’s operation of the App Store.Jordan’s letter gets at the still-elusive question of how much Microsoft would be affected by the new bills. With the threshold for a “covered platform” set at $600 billion in market cap and 50 million monthly active users or 100,000 monthly active business users in the U.S., Microsoft almost certainly fits the bill. But the practices targeted by some of the legislation fits more squarely with those of the other tech giants.Microsoft would seem to be impacted by some of the broadest of the legislation, such as one that shifts the burden of proof to dominant platforms in merger cases and another mandating data portability between platforms. But others, taking aim at discriminatory practices of such businesses or prohibiting dominant companies from owning and selling on marketplaces where there is a conflict of interest, appear to more readily fit companies such as Amazon or Apple.Rep. David Cicilline, D-R.I., chairman of the House Judiciary subcommittee on antitrust who led the charge for legislation, told Axios, “I don’t know whether Microsoft would meet the test that is set forth in these five bills.” He told Bloomberg that regulators would be the ones to decide who is subject to the measures.Smith, for his part, previously told Bloomberg TV, “There are aspects of the legislation that was introduced in the House last week that absolutely applies to Microsoft and many other companies.”Jordan has remained one of the committee’s chief skeptics when it comes to the antitrust investigation and bills, preferring to focus on allegations that the tech platforms censor conservatives. The platforms have denied the charges, and conservative users often dominate the most-viewed pages on services such as Facebook. Jordan’s letter reiterates such allegations and asks for details of Microsoft-owned LinkedIn’s content moderation practices, in addition to the questions about the antitrust bills.Rep. Ken Buck, R-Colo., the top Republican on the antitrust subcommittee, has walked a finer line when it comes to considering antitrust regulation and addressing similar concerns about platform bias. He’s made the case that the outsized power of dominant platforms is at the core of such issues. Already, several other Republicans joined him in co-sponsoring the new package of legislation.In his letter to Smith, Jordan approaches the connection between platform moderation and antitrust, asking, if the bills become law, whether Microsoft will “stop exerting editorial control over user content on its platforms.”Subscribe to CNBC on YouTube.WATCH: Here’s why some experts are calling for a breakup of Big Tech after the House antitrust report

Facebook scientists say they can now tell where deepfakes have come from
House Republicans zero in on Big Tech’s relationships with China
To Top
error: Content is protected !!
Top