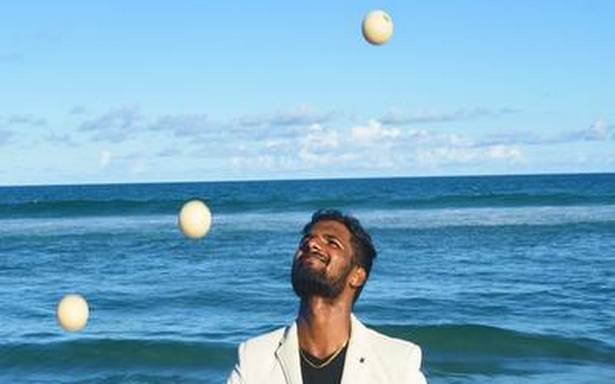 From knives and axes to clubs and rings, catch Unique World Records holder Prashanth M as he showcases his juggling skills at an event in Chennai

Prashanth M is on the terrace of his house in Sholinghur, Ranipet, effortlessly juggling three sponge balls. Children from the neighbourhood clap and whistle as he gains speed. “I have been juggling since 2010. My practise sessions on the terrace are like a show for the kids in my locality. They come here every day. Some even try their hand at it,” he says. The 26-year-old is now getting ready for his first public performance at Let’s Roll, an event at the Express Avenue Mall, Chennai. “I stayed home for the past seven months and kept practising. It feels good to know that I will be on stage again,” he says.Prashanth has performed on 850 stages across India. He holds a title in the Unique World Records (an authority that authenticates unique achievements head quartered at Bathinda, Punjab) for juggling four eggs for 54 seconds. “I did 223 catches in that short span of time. It was tricky as I had to be extremely careful not to break them.” Prashanth has been fascinated with juggling since his school days. “After watching jugglers on television, I tried to replicate their act with tennis balls.” Most of the learning happened online. Prashanth took up juggling professionally after a video of him juggling bricks, posted online by his friend, went viral. “I started getting calls to perform at events. I understood that there is a demand for the skill. I attended a juggling workshop organised by juggler Romain Timmers in Goa and learnt many new techniques there,” says Prashanth, who now performs with balls, rings, axes, knives, crystal balls, clubs and more. He also does it hanging upside down or while riding a unicycle. Though none of the acts are easy, Prashant says that balancing on a unicycle is the hardest. “I ride it for 10 kilometres every day to ensure my balance. Mostly I do it at night when there aren’t too many vehicles on the road,” he explains.He agrees that it is rare to find professional jugglers in India. “Here it is looked down upon as a job. I think it is time that we change this perspective. The best thing to do is educate the young,” he says. So he conducts free workshops for kids in Government schools to introduce them to juggling. Prashanth also hopes to set up an academy to train people who are interested in juggling. “The plan is in its primitive stage. I hope to do it in the next five years,” he says.Prashanth M will perform at Express Avenue Mall, Chennai, on December 19 at 4 pm.