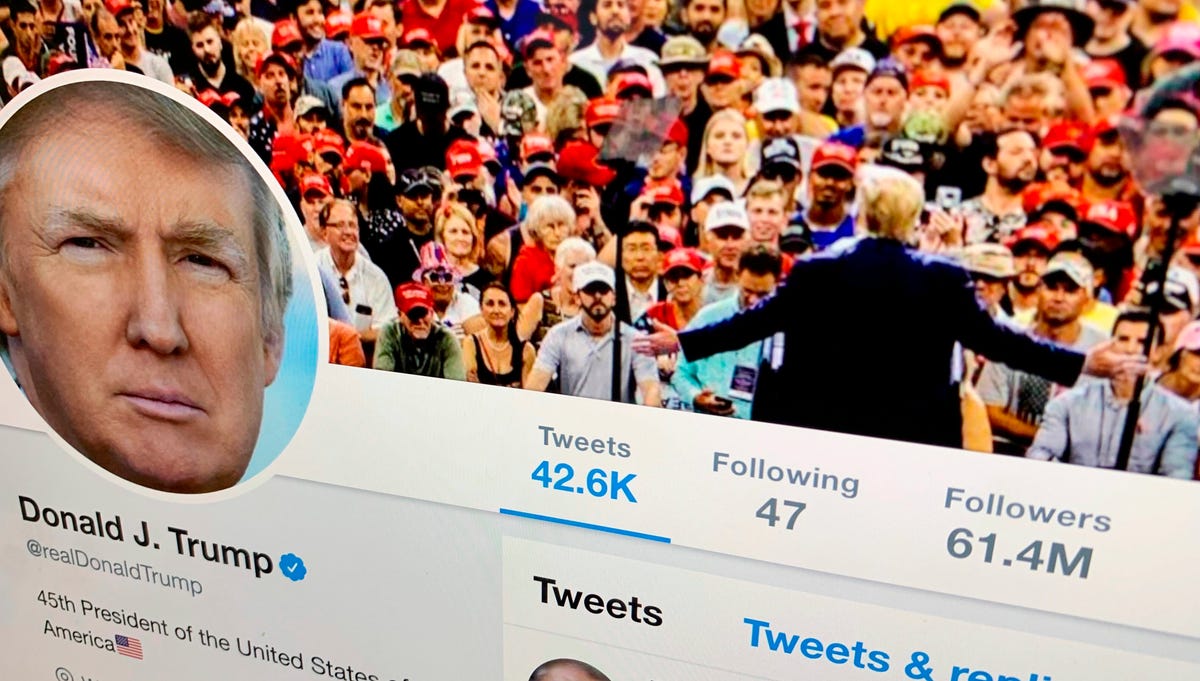 | USA TODAY
President Trump falsely claims he won the 2020 electionFalsely declaring victory while votes are still being counted, President Donald Trump threatened to ask the Supreme Court to halt the counting of legally cast absentee ballots, which he described as a “fraud.”Should President Donald Trump lose the presidency and return to life as a private citizen, he can expect to be treated as such by his favorite social media platform.Twitter, which has given the president leeway when he violated company policies, would take away Trump’s exemption when his term ends in January.Twitter’s rules prohibit hate speech or posts advocating violence, both of which Trump has often done. Twitter has different standards for world leaders and instead of yanking down their tweets, it adds warning labels. Election report card: ‘Social media has not been fair,’ Trump and Biden supporters grade Facebook and TwitterMore: Facebook shuts down pro-Trump ‘Stop the Steal’ group over ‘worrying calls for violence’But post presidency, instead of being labeled, Twitter’s policy calls for the tweet to be taken down altogether. If there are multiple violations, Trump could find his account frozen, suspended or banned. Some of Twitter high-profile bans include InfoWars conspiracy theorist Alex Jones, commentator Milo Yiannopoulos and congressional candidate Laura Loomos, who just lost a bid in Florida. “A critical function of our service is providing a place where people can openly and publicly respond to their leaders and hold them accountable,” Twitter said in a statement to USA TODAY. “With this in mind, there are certain cases where it may be in the public’s interest to have access to certain Tweets, even if they would otherwise be in violation of our rules.”On Thursday, several tweets by Trump were flagged by Twitter. In them, Trump claimed, without evidence, that voter fraud had occurred in the presidential election. Twitter linked to its own guidelines on the president’s tweets, saying that manipulating or interfering in elections on the network is not allowed.”This includes posting or sharing content that may suppress participation or mislead people about when, where, or how to participate in a civic process. In addition, we may label and reduce the visibility of Tweets containing false or misleading information about civic processes in order to provide additional context.”First time violators will be asked to remove the content, and be locked out until they comply. If the same user repeats the behavior second time, they will see their content labeled, and a third time “for severe or repeated violations of this policy, accounts will be permanently suspended.”Many conservatives who have run afoul of Twitter have moved on to other social networks, most notably Parler. Currently the 12th most downloaded news app on Apple’s iTunes chart, Parler has attracted prominent conservative voices like Sens. Ted Cruz and Rand Paul and Fox News Channel commentator Sean Hannity.  Several people who have recently been either banned or restricted on Twitter, including Loomer and commentator and podcaster Mark Levin, have also joined the social network.More: Twitter users tease people fearful of Biden’s proposed tax hike since most wouldn’t be affected”Speak freely and express yourself openly, without fear of being ‘deplatformed’ for your views,” says Parler on its home page. The website says that it’s to not take down posts. “In no case will Parler decide what content will be removed or filtered, or whose account will be removed, on the basis of the opinion expressed within the content at issue.” However, the company adds that if posts are reported, it will remove ones that are “posted by or on behalf of terrorist organizations, child pornography, and copyright violations.”Follow USA TODAY’s Jefferson Graham (@jeffersongraham) on Twitter