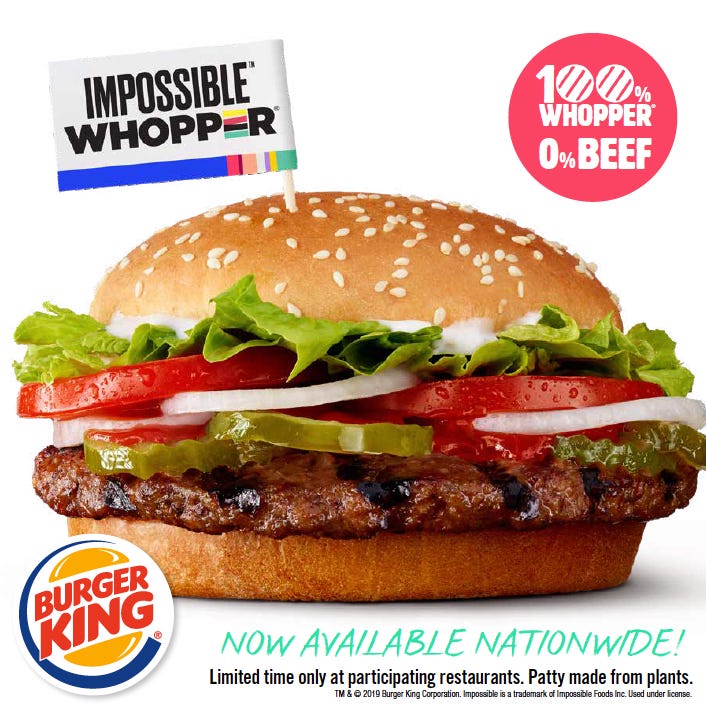 The fast-food chain announced Thursday that starting Aug. 8 the meatless and vegan burger will be available at more than 7,000 locations for a limited time. It also will be available for delivery through the BK App and through DoorDash.

The announcement comes four months after a pilot started in St. Louis area locations, which later expanded to other markets. Burger King announced in late April it planned to bring the vegan-friendly option to all restaurants by the end of 2019.

“We’ve heard great feedback and know the Impossible Whopper appeals to both current guests who are already big fans of the Whopper sandwich, as well as new guests who are excited about this new option,” Chris Finazzo, Burger King’s president for North America, said in a statement.

Burger King said in its announcement that it is the first coast-to-coast quick-service restaurant to serve the plant-based patty from food startup Impossible Foods, maker of the Impossible patty.

The Impossible Whopper will have a suggested retail price of $5.59 but pricing and availability can vary.

From Aug. 8 through Sept. 1, Burger King has a deal its calling the “Impossible Taste Test.”

You soon will be able to grill your own Impossible burger.

On Wednesday, the U.S. Food and Drug Administration approved a key ingredient included in Impossible Foods patties. With the approval, Impossible Foods can sell in grocery stores, which its competitor Beyond Meat, already does.

Impossible Foods said Wednesday that it plans to “launch its flagship product in grocery stores in September.”