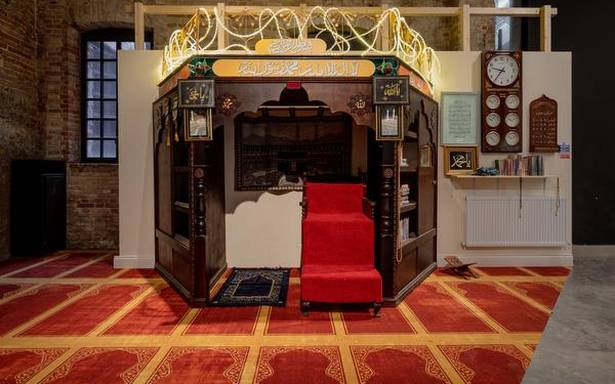 The pandemic edition of the biennale is designed around the curatorial question ‘How will we live together?’ yet offers visitors few practical solutions

Bold questions about architecture find a natural home in Venice: the city has long both defied and embodied the dogmas of urban planning, with its ancient stones seemingly floating on the lagoon waters and its pedestrian-only narrow streets intersecting with a capillary network of canals.But there’s bold, and then there’s inconsequential. Much of the twice delayed 17th Architecture Biennale, which has just opened in the northern Italian port city, often crosses over into the latter. Participants from 46 countries tackled the arduous, vast question asked by Hashim Sarkis, the Lebanon-born dean of architecture and planning at the Massachusetts Institute of Technology, who curated this edition: “How will we live together?”

(Clockwise from left) An exhibit by Kenyan architects Cave_Bureau; a snapshot of Arsenale, the US pavilion, an image of Great Britain’s pavilion, a peek at Chile’s section
| Photo Credit:
Andrea Avezzù and Francesco Galli

“We are asking architects… because we’re not happy with the answers that are coming out of politics today,” Sarkis said. “We need a new spatial contract because we can’t have a social contract. Irrespective of the huge problems that we’re facing, we can’t bring society together.”But the terms of the question are so general that they transcend the boundaries of the discipline. Even the specification the curator added — living together among diverse beings, as new households, as emerging communities, across borders, as one planet — expand the remit of the Biennale to pretty much all aspects of reality. This flaw has an upside, however, because it acts as a sophisticated poll to gauge contemporary worries.

The visitor is left with an impression of pending doom, with many of the pieces and installations tackling the unprecedented challenges facing Man on the planet. Climate change, the depletion of natural resources, and overpopulation form a red thread that innerves the exhibition that is taking place at the Giardini park, the Arsenale grounds, and Forte Marghera. In the Giardini’s Central Pavilion, a metal box the size of a truck produces thundering outbursts of noise at random intervals, giving frazzled visitors a reliable proxy for what it sounds like when the ice pack cracks in Antarctica. Nearby, drips fall from a mock-up of the Alps hanging upside down from the ceiling, a not-too-subtle reminder of the breakneck speed at which glaciers are melting. Walking into a glass box, the visitor can smell the scent of a now-extinct plant. It’s artificial, because that rich mix of floral, balsamic, soft, and sweet accents has been forever lost.

Missing the pointA tradeoff between width and depth is inevitable, and the world’s largest architecture exhibition prides itself on leaving the reins loose on the architects’ necks, freeing them — albeit momentarily — from the omnipresent constraints they face with budgets, space, taste. But the purpose of architecture must remain to organise space inhabited by humans, and tasking it with universal concerns results in tokenism. In the Corderie, the 300-metre-long factory where workers braided ropes for Venice’s vessels, visitors look puzzled as they stride by ‘Maternity Mensware’, a garment that explores non-female and transgender pregnancy, and ‘Catalog for the Post-Human’ an ironic series of objects designed to enhance productivity for the gig workers of the future. The issues raised here are certainly relevant, but the context makes them pointless.One wouldn’t certainly expect the Biennale to stick to too narrow a focus: a building material trade fair it is not. At the same time, however, presenting the flaws of contemporary urbanisation as “the product of the dominant capitalistic dogma that promotes endless growth and wealth concentration” risks eluding one of architecture’s main missions: finding practical solutions to practical problems. Architecture has plenty on its plate already: the buildings and construction sector accounted for a third of final energy use and almost 40% of energy and process-related CO2 emissions in 2018. Much of it resulted from manufacturing building materials and products such as steel, cement and glass. In order to reach net-zero, the International Energy Agency (IEA) has estimated that direct building CO2 emissions need to fall by half by 2030, which equates to an average 6% cut per year. That’s quite a tall order already, and if architects don’t take to it, who will?The most interesting bits are indeed those where contributions remain close to the materiality of practical problems, and, luckily, the Biennale offers plenty of that, too. A video on the hospital of the future, which is showed to an audience lounging on mock hospital beds, elaborates on how new technologies, such as remote surgery and data-driven personalised care, are revolutionising space requirements for healthcare and making most of today’s infrastructure obsolete.A video shows European Space Agency-conceived four-story modules that will be used to build a human colony on the Moon. The egg-shaped inflatable constructions look airy and comfortable, and take the edge off the idea of extraterrestrial life.

Meanwhile, at the pavilionsNational pavilions show that architects can make bold political statements while sticking to their very own domain. A large room filled with round tables laid out for lunch reminds visitors that in Singapore — one of the world’s richest countries — more than 80% of the population lives in government-owned buildings where sharing space is the norm.Some national pavilions in the Giardini also show ways to problematise relevant issues without staying too literal. A stream of water flows through the Denmark pavilion, with pipes collecting rainwater from the outside and leading it on a closed-loop journey through the exhibition. While the installation doesn’t get into the technicalities of water harvesting, it leaves visitors free to become part of the cyclic system by drinking a cup of tea brewed with leaves from the herbal plants that absorb water from the cyclic system.

At the Japanese pavilion, a wooden house in Tokyo was dismantled and shipped
| Photo Credit:
Francesco Galli

The Japanese pavilion celebrates reuse and renovation, offering the story of a postwar house that was dismantled and transported to Italy. As it celebrates the beauty of humble materials — scaffolding pipes, mesh, blue tarpaulin, a bath tub — the exhibition ultimately questions with pertinent grace the sustainability of architecture.The US celebrates wooden framing with a monumental 12-meter timber installation that covers the country’s neoclassical pavilion. Bringing the ubiquitous soft-wood structure – which still props up 90% of domestic construction in the country – outside for everyone to see makes a convincing point about sustainability and acceptability.

India doesn’t have a pavilion, but there’s a small room in the Arsenale, which approaches the issues connected to the country’s tumultuous urbanisation. The video pits renderings of shiny skyscrapers and immaculate footpaths of the smart cities the government plans to build against the reality of the fast, disorderly, organic growth of small cities such as Sriperumbudur, in Tamil Nadu, or Chakan, in Maharashtra. Showing footage of poor migrant workers making their way back home during the first pandemic lockdown last year, it implores urban planners to take into account their needs, instead of pursuing the chimera of monumental world-class cities.India’s cursory, minimal contribution has the merit of showing — by its sheer existence — that architects and planners have still a lot of work to do.Venice Architecture Biennale is till November 21, 2021