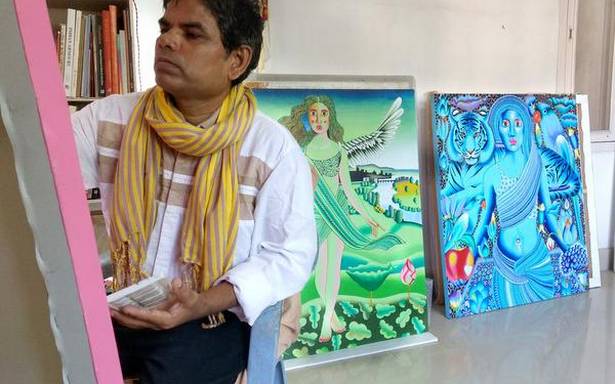 Moving away from the overwhelming shades of whites, artist Kattakuri Ravi’s new line of works reflects the use analogous colours to portray powerful feminine energy in vivid hues and forms. Known for his unique style of bright art with Madhubani art-influenced feminine faces, Ravi will be showcasing nine of his works at Spain’s annual Lacuna Festivals, which celebrate International Contemporary Art.The month-long online art exhibition, beginning on July 2, will feature Ravi’s work alongside 325 artists from 83 countries. “My new works reflect the beauty of the woman encompassing the body and spirit, along with perceived attributes of goodness, tenderness, devotion and patience,” says the Visakhapatnam-based artist, who sent the works in the form of images for the festival.This is the first time that Ravi has experimented with application of colours, infusing energy and bold contrast with a sense of harmony and balance. Ravi’s past works had a predominant effect of white. His nine works that will be displayed at the festival in Spain are done in the medium of acrylic on canvas and on the theme of ‘women and power’. The feminine figure appears with the tigress in some of his arT, symbolising “the power of a woman with that of the fierceness of a lioness.” Speaking about the effect of pandemic on art, Ravi says: “Often, there are art researchers and students interacting with us during international shows. This kind of articulate exchange of ideas creates a powerful culture of art, and I look forward for these experiences. In online art festivals, that is missing. But it has a positive side as well as you are able to reach a much wider audience through the online shows.” Inspired by homeAfter graduating from the Department of Fine Arts in Andhra University, Ravi pursued a Masters in Fine Arts from Viswa Bharati University, Shantiniketan, where he was influenced by Madhubani paintings. He adds that his professor Jogen Choudhary, one of India’s most dynamic and multi-faceted modern artists, was instrumental in opening up his artistic sensibilities. Born in an agricultural family in Andhra Pradesh, Ravi adds that growing up in the sylvan surroundings left a deep impression on him. The myriad hues of Nature, the simplicity of village life, the cheery gait of the village women with lustrous hair — all find a way into his work. He adds, “My style reflects the core of Indian culture with all its rich hues and figures, and perhaps that’s what draws the eye.” Ravi’s work has been featured in exhibitions across India, as well as Greece, Switzerland, China, Malaysia, South Korea and Bangladesh.