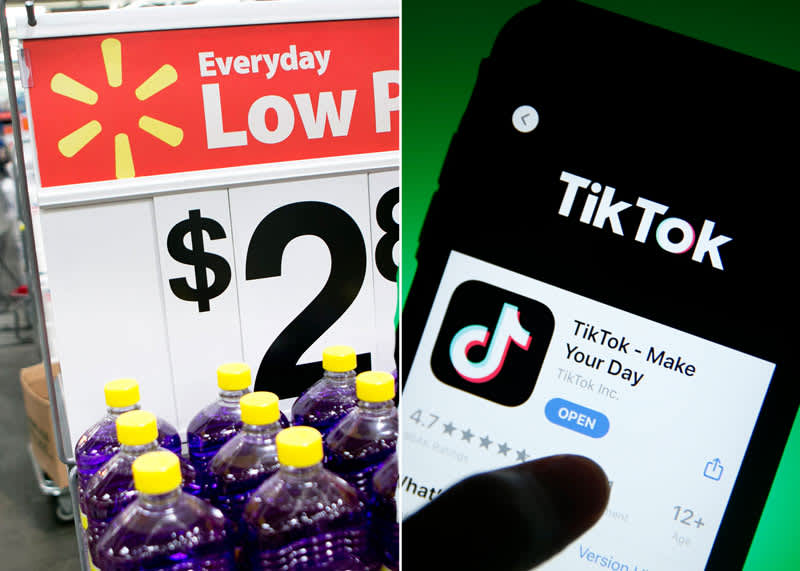 Walmart’s hopes of owning a stake of TikTok may be dashed, but don’t expect its interest in the viral video app to fade away.The company’s plan to buy the social media app’s U.S. operations with Oracle has been indefinitely shelved as the Biden administration reviews security concerns with Chinese tech companies, according to a Wall Street Journal report Wednesday. It cited unnamed people who were familiar to the matter.Walmart spokesman Randy Hargrove declined to comment on Wednesday’s report and referred questions about a potential TikTok sale to the Biden administration. Oracle did not respond to CNBC’s request for comment.At a White House news briefing Wednesday, press secretary Jen Psaki said the administration hasn’t taken any new actions on the TikTok deal. She said it continues to evaluate potential risks to U.S. data from apps including TikTok.Walmart is one of many retailers that have looked to the popular app as a way to follow trends, create shoppable content, and strengthen its brand among teens and 20-somethings. Walmart buyers consulted TikTok as they decided which toys to order for the holiday season. It had a one-hour livestream event on the app in December. Those efforts are likely to continue — even if Walmart doesn’t have a front-row seat.”We were really excited by what we saw and the engagement by customers and the experience,” Walmart’s chief customer officer, Janey Whiteside, said in a recent interview, when talking about the livestream TikTok event. “Expect more things like that from us over the coming days, weeks, months.”She said having events like that “creates more really interesting places for us to be able to work with brands.” That’s taken on added importance as the retailer aims to grow its advertising business by more than 10 times in the next five years and better compete in that industry with Amazon. Jefferies analyst Steph Wissink said a stake in TikTok would give Walmart an edge over competitors that also use the social media app. She compared it to being an auto mechanic versus an enthusiast. As a partial owner of TikTok, Walmart could pop the hood and better understand the powerful social media app. It could gather more data about how to make its ad campaigns or videos more potent. It could even tinker with how the app works to give it a leg up or box out other retailers, she said.”Right now, as an outsider, Walmart is an enthusiast,” she said. “They’re using TikTok, they’re using social media, they’re using emerging ad platforms in a way that appreciates a new way to connect to consumers — but owning the capability would give them intimate knowledge of the workings, the architecture, the mechanics of the engine.”Still, she said, the app will remain an important media platform for Walmart by “seeding brand awareness and relevance in a generation that will eventually age into their spending power years.” By using the app, she said, Walmart is thinking a decade ahead.Walmart’s pursuit of TikTok began last year, after President Donald Trump pushed TikTok’s Beijing-based parent company, ByteDance, to find an American buyer or face a national ban. He said the popular video app created security concerns because it could hand over U.S. users’ data to the Chinese government — an allegation that TikTok denied.The retailer teamed up with Microsoft and later with Oracle last summer in an effort to buy part of the social media company’s U.S. operations. As part of the Oracle deal, Walmart was expected to take a 7.5% stake in the U.S. operations of TikTok and its CEO, Doug McMillon, would get a seat on the board of the newly created company.In an interview on CNBC’s “Squawk Box” in October, McMillon said Walmart saw TikTok as a “discovery opportunity” that could inspire purchases for shoppers.”If you’re watching a TikTok video and somebody’s got a piece of apparel or an item on it that you really like, what if you could just quickly purchase that item?” he said. “That’s what we’re seeing happen in countries around the world. And it’s intriguing to us, and we would like to be part of it.”Livestream events are already lifting sales for brands in China and other parts of Asia. They are a central part of Alibaba’s Singles Day, a huge shopping festival that’s popular outside of the U.S. Two-thirds of Chinese consumers said they have purchased products via livestreaming in the past 12 months, according to an AlixPartners survey conducted in the fall.And it’s become a sales tool that more U.S. brands want to master, too. Last month, for example, a Kate Spade heart-shaped bag went viral on TikTok — another reminder of the app’s power.”We were able to harness that,” said Joanne Crevoiserat, CEO of Kate Spade’s parent company, Tapestry, in an interview on CNBC’s “Closing Bell.” “The bag sold out.”— CNBC’s Lauren Feiner contributed to this report.