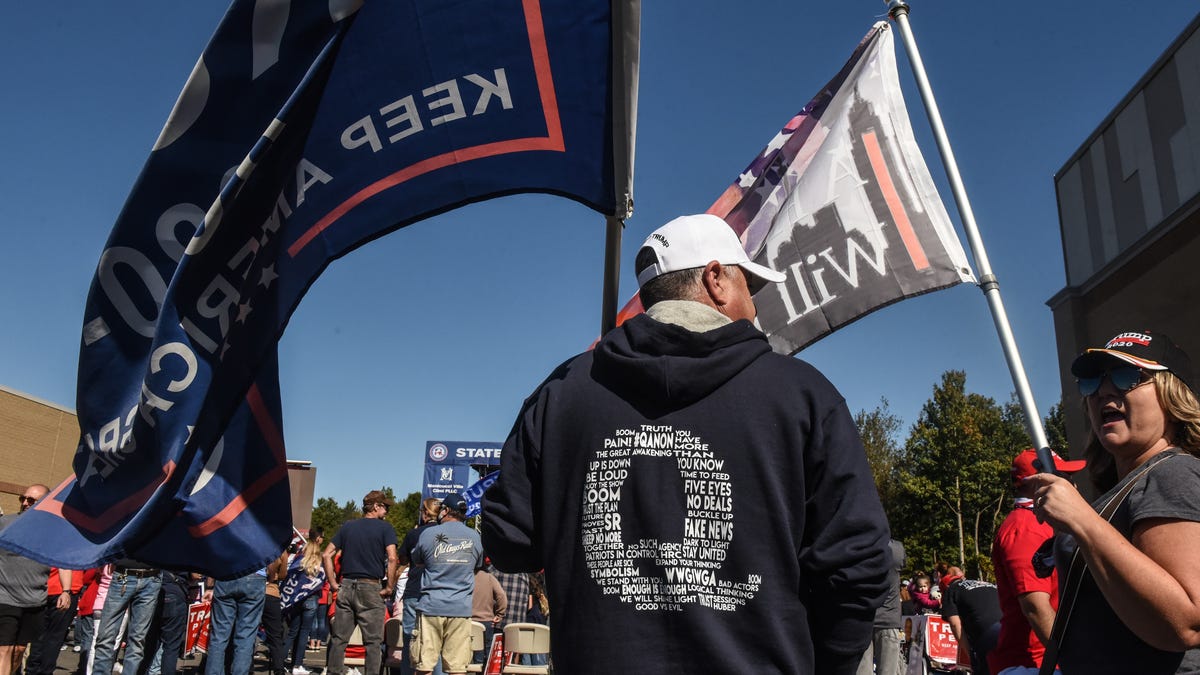 | USA TODAY
Trump on QAnon conspiracy theory: ‘They like me very much’QAnon has been classified by the FBI as a domestic terror threat, according to an internal memo first published by Yahoo! News.USA TODAYPresident Donald Trump’s stronger-than-expected performance in several battleground states may be partially due to Americans who believe in a radical conspiracy ideology rushing to the ballot box to support him.QAnon adherents appear to have accounted for a larger share of the electorate in swing states than in the average state, according to a fresh analysis conducted for USA TODAY by University of Southern California experts on misinformation and social media.Emilio Ferrara, a professor and research team leader at the USC Information Sciences Institute, said voters in Florida, Georgia, North Carolina, Wisconsin, Michigan, Nevada and Arizona “have engaged and supported” QAnon content at a rate of “about twice” the average state.“That is a lot,” he said. “This is something that the polls that were based in traditional surveys didn’t surface.”Ferrara based his conclusion on a fresh state-by-state review of 240 million election-related tweets from June 20 through Sept. 9 that he previously analyzed in a peer-reviewed study published five days before the election.Some QAnon watchdogs, however, are skeptical that the movement had an outsized impact on the election’s outcome.”I do not think QAnon activity had an influential effect pre-election,” said Emerson Brooking, resident fellow at the Atlantic Council’s Digital Forensic Research Lab. “QAnon networks are, however, amplifying some of the wildest conspiracies in this dangerous post-election period. I am concerned about how they are contributing to the general atmosphere of uncertainty.”Conspiracy theories abound: How QAnon and other dark forces are radicalizing AmericansQAnon conspiracy theories debunked: Don’t be fooledQAnon followers believe in the debunked premise that an evil cabal of Democrats is running a secret child-sex-trafficking ring – and that Trump is poised to break it up. The group also promotes a host of loosely connected and often disprovable theories, often using the hashtag #SaveTheChildren to circulate falsehoods.In the final weeks leading up to the election, QAnon believers rallied around the bogus premise that the former vice president’s son, Hunter Biden, is “an incestuous pedophile based on speculative and unverified contents from his laptop,” said Aoife Gallagher, a disinformation and extremism analyst at the London-based Institute for Strategic Dialogue, which tracks extremism around the world.”It is hard to say whether this had an effect on people’s voting decisions, but we certainly came across evidence of concerted disinformation campaigns to get people to change their vote on the back of this information in the final days of the campaign,” Gallagher said.While it has thrived on extremist message boards and in the dark corners of Facebook, Twitter and YouTube, QAnon activity is not limited to the backwoods of the internet.  The group has drawn support from the highest ranks of American politics.Trump himself has refused to denounce the group on several occasions, while Congress is set to get its first QAnon supporter with the election of Georgia Republican candidate Marjorie Taylor Greene. Another Republican winner, Lauren Boebert of Colorado, also previously expressed support for QAnon while saying she is not a follower.Despite the increasing spread of their ideology, QAnon supporters can be hard to identify in traditional polls because they are believed to be hesitant to admit their beliefs or less likely to participate in surveys, Ferrara said.But the polls may have undercounted Trump supporters in general regardless of whether they engaged in QAnon activity.For example, in Wisconsin, the polling average calculated by data analytics site RealClearPolitics gave Biden a 6.7 percentage-point lead, but he ended up winning by less than 1 point. In Florida, the polling average gave Biden a 0.9-point edge, but in the end Trump prevailed by more than 3 points.“There are some judgmental aspects to disclosing yourself in alignment with these more unconventional ideas, therefore their responses were not necessarily accurate,” Ferrara said of QAnon participants in pre-election polls.Additional research indicated that QAnon activity was especially acute in key swing states.QAnon accounts were particularly active in the battleground states of Texas, Florida and North Carolina, according to research from Advance Democracy, a nonpartisan, nonprofit public interest research group that studies disinformation.To be sure, in recent months, Facebook, Twitter and Google’s YouTube took steps to ban or significantly limit QAnon activity. Those efforts restricted the reach of what Gallagher described as the “digital cult” and what the FBI has labeled as a domestic terror threat.But experts say QAnon supporters have continued to find ways around social media limits.As of Nov. 3, there were more than 95,000 active QAnon accounts on Twitter, an analysis from Advance Democracy found. Those accounts were responsible for 334,200 posts about the 2020 election from  midnight to 5 p.m. on Election Day, more than double the amount from the same period on the previous day. And QAnon accounts made up 2.3% of the Twitter conversation about the election during that timeframe.Two of the top 10 hashtags used in posts about the 2020 election – #maga and #trump2020 – received over 7.1% of their amplification from QAnon accounts during that period, according to the analysis. Even the #stopthesteal hashtag, which Trump supporters used to promote the false concept that Democrats were stealing the election, got a boost from QAnon. About 15% of #stopthesteal posts came from QAnon accounts, Advance Democracy found.Beyond just amplifying these messages on social media, QAnon supporters were likely motivated to vote based on their beliefs about Trump’s supposed anointment as the person responsible for destroying the fantastical sex-trafficking cabal, said Gallagher of the Institute for Strategic Dialogue.“QAnon at its core is a pro-Trump movement that positioned Trump as the savior and Biden as the devil,” she said. “It did this by bombarding people with lies and sowing complete distrust in industries and institutions that people would traditionally turn to for information. We’re also seeing the QAnon movement spreading vast amounts of disinformation related to voter fraud and attempting to sow distrust in the results of the election.”Contributing: Jessica GuynnFollow USA TODAY reporter Nathan Bomey on Twitter @NathanBomey.