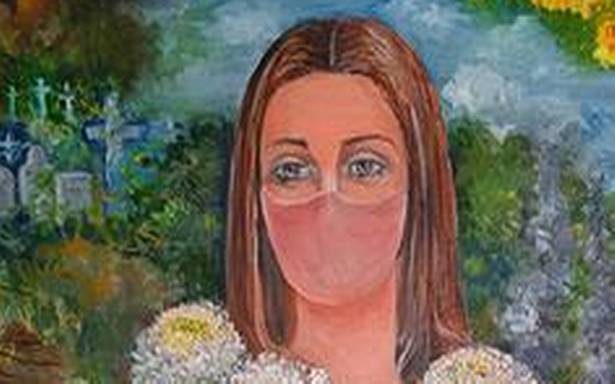 Yasmin Zaidi has begun to paint grief. It comes through in her two new works: one shows a young woman holding chrysanthemums in her arms, with graves behind; another has masked, socially distant people along a stairway (to heaven?). She asked her family what to name them, and got a number of replies: Viral Apartheid 2021, Loveliness and Loneliness. “I realised that everyone is feeling personally involved during this pandemic… They will give their own names to the paintings,” says the 70-year-old artist who paints flowers and people.Zaidi has lived across India — Firozpur Jhirka (in Haryana), JK Puram and JK Gram (in Rajasthan), Delhi and many more — where she worked as an educationalist through her life, mostly in administrative positions, though she trained as an English and Social Studies teacher. “I taught art sometimes because I was just able to,” says the hobbyist, whose home, when growing up, was filled with letters and pictures. Her father, Syed Ali Jawad Zaidi, was an Urdu poet and scholar, and her grandfather dabbled in art.She draws from the various elements of Nature she has encountered through life: The stairway in her current oil on canvas leads towards birch trees she retrieved from mental images of Kashmir. The red bottle brush and yellow tecoma in the ‘girl with chrysanthemums’ are from her ground floor flat in Mumbai, where she has a little garden. “My mother was very fond of gardening,” she remembers.

This time though, flowers have been used as a metaphor for the departed. Urdu poet Afzal Ahmed Syed’s Hamein Bahut Sare Phool Chahiye, which seems to allude to war and talks about how we need a lot of flowers to cover our dead, played in her head as she painted.“When I paint, personal things come in — a book by Annie (her daughter, a writer), but the whole world was becoming personal,” she says of the shock waves that seemed to have affected everyone.She hasn’t thought of selling: “I hardly think of the paintings as belonging to me.” She adds she wouldn’t know how to, and even if she did, it would go to COVID relief. Right now, she’s recovering from a gall bladder surgery and is with her son in Pune. “I want to paint more, but I have run out of canvas, and it’s difficult to get it right now,” she says.

Spirited works of art and light: Table lamps created out of used liquor bottles
This Visakhapatnam-based firm uses technology to bridge the gap between artisans and buyers
To Top
error: Content is protected !!
Top