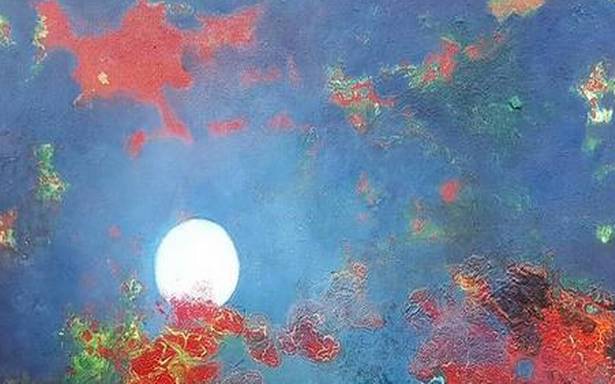 Wonders of Nature have been a constant source of inspiration for senior artist DP Sibal owing to a childhood spent amid Nature and his ecological concern. The pandemic may have confined the 86-year-old artist indoors, but art has kept him going. “Painting during lockdown is a kind of mental tonic; it helps to soothe nerves and make peace with circumstances,” says Sibal over a call from Delhi. The artist has also created some paintings with his grandson. “I plan to display our works,” he shares.

Born in Sargodha (now in Pakistan), Sibal’s journey in art began at five when the family moved to Dinga (now in district Gujrat, Pakistan).; there, he was enamoured by the lush green countryside and stargazing“The night sky dazzled with billions of stars and one could see the milky way,” he recollects with child-like enthusiasm. From walls of his house to pages on exercise books… all turned into a canvas for the little boy’s medium of expression. After Partition, as the family moved to India, Sibal’s artistic pursuit continued and took him to London and Europe where he was introduced to works of masters.. From the Louvre Museum (‘where I saw the Mona Lisa’) and the Moulin Rouge (‘I could feel the works of Henri de Tolouse- Lautrec in the foyer’) in Paris and the Tate Gallery in London where John Hay Witney’s collection of paintings were exhibited in the early ’60s, created a lasting impression. “I paint in a way that everyone understands my themes, appreciate Nature but also preserve it,” he says.

Music also played a significant role in the artist’s life as he drew inspiration from listening to western classical musical conducted by Thomas Beecham, Malcolm Sargent and Otto Klemprer at the Royal Festival Hall, London. He recollects his interaction with Bertrand Russell on the streets of London where he saw Russell carry a ‘Ban the bomb’ placard; that determined he would paint Nature and Environment. “Experiencing the beautiful countryside and mountains of Ireland and Switzerland made me think about peace and environment which I express through my artworks. Balance of Nature has to be maintained; development without destruction should be the aim,” he adds.Sibal’s canvases are a medium to raise awareness of Nature and the environment. Besides designing the logo for ‘40 years of Development’ for UNDP, his artworks have been adopted by WHO, Indian Council for Child Welfare and Thalassemics India for greeting cards. Art reflects his love for Nature and his focus now is to spread the message of preserving it for future generations.

He had virtual exhibitions (www.dpsibal.life) for the recent World Environment Day and participated in art webinars. Reflecting on COVID-19 he says, “The lockdown period was stressful especially for senior citizens but painting worked as a stressbuster. People’s appreciation is also inspiring. I feel young at heart because of my love for art,” he signs off.