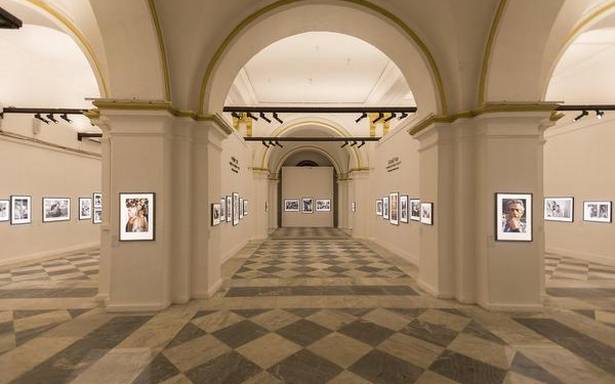 Exhibition acknowledges cosmopolitan nature of Kolkata as one travels through more than two centuries.

As you stroll through over 200 years of art in Bengal in this exhibition, the works on display seem even more precious considering the historic building that houses them almost became rubble — before timely intervention saved it.Popularly known as the Old Currency Building — sitting in BBD Bagh or Dalhousie Square, in the heart of Kolkata — it was built in 1833 to house the Agra Bank during the time of William Bentinck. In 1868, a decade after India formally came under British rule, the handsome structure was converted into the all-important office where currency was issued and exchanged.It remained in use until 1994, when it was decided that the structure had become too old and should be pulled down. That was a time when there was scant regard for heritage in India, and in 1996 the Central Public Works Department initiated its demolition. The Calcutta Municipal Corporation and the INTACH intervened, following which the Archaeological Survey of India was entrusted with its conversation — though, by then, its domes were gone.

Popularly known as the Old Currency Building — sitting in BBD Bagh or Dalhousie Square, in the heart of Kolkata — it was built in 1833 to house the Agra Bank during the time of William Bentinck.

Almost a quarter of a century later, in January 2020, the renovated Old Currency building was dedicated to the nation by Prime Minister Narendra Modi, and its reopening was marked with Ghare Baire, the exhibition showcasing art in Bengal from the eighteenth to the twentieth century. Being organised by the Ministry of Culture through DAG Museums, a private entity with rich experience in curating art, the show has reopened to the public again after a long interruption due to the pandemic.Considering that it showcases more than 200 years of art, it can take as many hours for a serious connoisseur or student to study every single exhibit, but for the layperson, even for those with no interest in art, an entire morning or afternoon at the gallery should be edifying enough. Entry is free.“We have taken care to make art as accessible as possible — that’s the USP of this show. The accompanying captions explain every work in a manner that’s easy to understand,” Sumona Chakravarty, deputy director of DAG Museums, told The Hindu. According to her, the name, Ghare Baire, was selected as a tribute to the iconic novel by Rabindranath Tagore and the film (of the same name) by Satyajit Ray, as a way to mark a continuity of great art and culture in the region.“The exhibition acknowledges the cosmopolitan nature of the city, which is reflected in the exhibition as we travel through more than two centuries, and see how global exchanges and local traditions shaped art in the region,” Ms. Chakravarty said.

While artists can set up their studio in the museum, the venue also holds programmes like museum trails and gift-a-tour.

Bilingual timelines on the walls give a detailed chronology of development of art in Bengal, and works of practically every artist associated with Bengal are on display. Then there are numerous paintings, where one would like to linger on to study details, but the names of whose creators have been lost to time. One such oil-on-canvas by an anonymous artist shows Shiva sprawled on the ground and Parvati clapping at his predicament: angered by his inebriation, she had sent her lion to chase his bull, causing him to fall. The caption explains quite artfully: “Challenging preconceived notions of divinity, the artwork humanises the deities and shows their susceptibility to mortal emotions.”An entire section, needless to say, is devoted to Satyajit Ray, who made the expression “Ghare, Bhaire” (At Home and the World) famous across Bengal; dozens of pictures clicked on the set by his favourite photographer Nemai Ghosh are on display.“During the lockdown [enforced barely two months after its opening] and the period that followed, we were continuing all our programmes online, but now we are reopening the museum slowly and safely as a space for the city’s creative community. Artists can set up their studio within the museum, there will be book readings; we have also started programmes like museum trails and gift-a-tour. The idea is to promote art and inspire new thinking,” Ms. Chakravarty said.

Making the right collaborations
A champion of restoration
To Top
error: Content is protected !!
Top