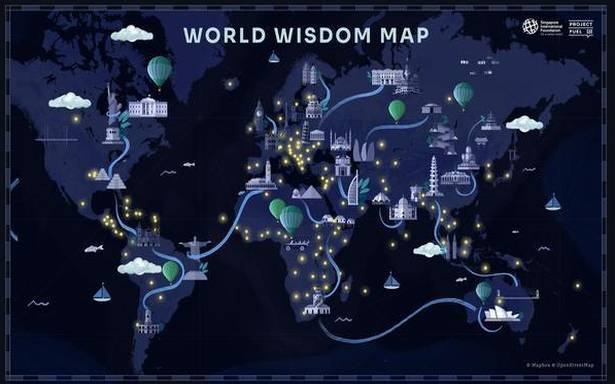 World Wisdom Map is a global project that shares wisdom from people in 195 countries, as we start another year. You can contribute, too

An atlas is lit up with tiny, hexagonal balls of yellow light. Each light is a tiny nugget of wisdom, collected from one person in each country across the world. This is the World Wisdom Map, a constantly updating repository of life lessons from 195 countries.Project Fuel’s latest initiative, funded by Singapore International Foundation, is a brainchild of its Mumbai-based founder and artistic director Deepak Ramola. It documents the stories of people from every country (193 members of the United Nations, along with The Vatican and the State of Palestine). Having gone online on December 25, it so far displays over 375 stories, of which India alone contributes 103. These are stories of war, resilience, hope, freedom and friendship. Eritrea-native 18-year-old Medani talks about how her mother helped her flee the war in her home country. As a refugee without proper documents, she spent four months in jail in Libya — all of this, at the of 17. A similar account is of North Korea’s Dongjin Kim, who narrates how he risked his life for freedom, and ran away from his home country at the age of 14. And then, at the other end of the spectrum, is the story by 75-year-old Timo Alarik Pakkanen, a man who has been playing Santa Claus for the past 60 years.

Artwork by Sarah Kaushik, inspired by a life lesson that said ‘You can stop’.

“People opened up about their marriages, domestic lives, their mental health… for the world to learn from. You need not be from North Korea to be able to relate to that person’s story and appreciate the cost of freedom. It has allowed us to see that we are more alike than unalike,” says Deepak.Only human, after allWork on this project began 11 months ago, when the pandemic had not yet arrived on India’s shores, and Italy was just a talking point in newsrooms. “My mother asked me where Italy is, and then the first thing she said was do you know how many people have died there,” recounts Deepak. “Over the subsequent days, I noticed that we were looking at countries with a lens of loss. And I thought, how can we counter that narrative with a lens of learning? Ten years from now, you can’t just say these many people died and these many recovered — it’s more than that.”

Artwork by Norzhin Norbhu, inspired by a life lesson from Nepal

With an aim to share how different people survive and thrive using their own coping mechanisms when the headlines are grim, World Wisdom Map was born. To collate accounts from each country, some considered inaccessible, was a mammoth task. “We did not want all the contributors to be chosen by us or it would just filter it down to one type of people, based on our sensibilities and unconscious biases,” says Deepak. Looking for diversity, the team put out a call on social media for volunteers from different countries, age groups and backgrounds. What followed was a long chain reaction of people putting them in touch with their friends in other countries, to put together a constellation of stories.A major task was the translation of stories that came in native tongues: from Kazakhstan to Portugal, and cross-verifying if the translations were done correctly. In this way, the stories were told and retold, to the core team, the volunteers, design team, artistes, the data crunchers and so on, multiple times.A face to the wordsThese stories have inspired not just Project Fuel’s education curriculum, but also a series of 30 artworks, made by 10 Southeast Asian artists from India, Taiwan, the Phillipines, Indonesia, Singapore and Sri Lanka. “We gave each artist a bouquet of stories to work with, and they selected the ones that they felt the closest to,” explains Deepak. “For example, Singaporean artist Kenneth Chin is well versed in environmental art, so we offered him stories related to Nature.”

Artwork by Harshad Marathe, inspired by a lesson on living an authentic life

The story that moved Mumbai-based Harshad Marathe, was that of Jillian Mari Harris, from Trinidad and Tobago. Jillian shares something that her father taught her: ‘An oak tree will never have to tell you it’s an oak tree.’ Harshad visualises this account on the importance of living authentically, through a woman, as well as other creatures, unravelling through the form of an oak tree. On a closer look, she seems to be pushing away the tapestry-like facade of the tree.Touched by how many hurdles Bhutan’s Wesel Dema had to cross to pursue her passion of sewing, Janhavi Sharma created a portrait of her stitching together her own self, making the machine as much a part of her, as her hands. Wesel says that this thoughtful rendition gave her hope and the positivity to tide over the pandemic. “I wish to hang this portrait in my sewing room,” she adds.

Artwork by Janhavi Sharma, inspired by a woman’s tale of overcoming odd to follow her passion: sewing

Collecting over 375 stories from across the world also gave rise to the opportunity of using the accounts as data sets to quantitatively understand human behaviour. With the help of data scientists and visualisers, the team gained insights on who influences us the most, and what emotions and values can drive change at what age. “The undercurrent of it all, was that just the simple act of condensing and talking about your life is itself an act of optimism,” says Deepak. “To verbalise what this situation has taught you, is to empower and guide yourself through the next situation at hand.”To share your story, visit worldwisdommap.com