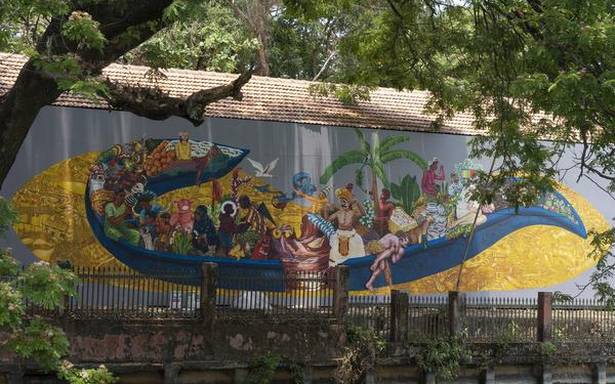 Eight artists from Kalady depict multiple facets of Kerala in a large mural at ‘Lokame Tharavadu’, an art show at Alappuzha

The site of ‘Lokame Tharavadu’, an ongoing contemporary art exhibition at Port Museum in Alappuzha, Kerala, is a striking mural. Painted by eight artists over four days, the 60×15 feet art work is a busy mosaic of varied images. From coconuts to fish and other things in between, every image in the painting reflects an aspect that defines Kerala. Organised by the Kochi Biennale Foundation, ‘Lokame Tharavadu’ features works of over 260 Malayali artists from India and abroad. It will be on till May 31 at six venues — five in Alappuzha and one in Ernakulam.The mural at the Fort Museum is of a snake-boat full of people, flora, fauna and random objects. The artists say the idea is derived from the biblical Noah’s Ark, and adapted to reflect the present socio-political scenario in the State. The seemingly disconnected images are a pointer to Kerala’s religion, politics, identity and cultural standing. “It is an artistic interpretation of the Malayali ethos and is intended to make viewers stop and think,” says Pranav Prabhakaran, one of the artists.

Artists at work on the mural

The work maintains a uniform style, which makes it more appealing. A plantain tree, heavy with fruit, emerges from the boat, which has stacked on its opposite end piles of aluminium pots. A woman clad in a purdah sits talking on the phone. There are bunches of coconuts and fishermen with their nets. A chakyar (a traditional performance artist) seems to be in midst of a performance and two men are shown locked in embrace. A pink stuffed toy sits beside a fox, whose keen eyes seem to have spotted something of interest outside the painting.

Trespassers, the artists’ group that did the mural

The wall with its mural emerges as a bright pop of colour from a distance. Done in emulsion paint, it can be seen as a politically charged work that raises uncomfortable questions, says Premjish Achary, who handles programme and editorial of ‘Lokame Tharavadu’. “This is the very nature of graffiti; it has to ask questions. The artists tread the complex territories of sexual identity, same-sex love, religion, and communal disharmony in this work,” he adds.Alumni of the Bachelor of Fine Arts course at Sree Sankaracharya University of Sanskrit, Kalady, the eight artists (Pranav, Vishnupriyan K, Jinil Manikandan, Amit Payyannur, Bashar UK, Sreerag Kannan, Arun Gopi and Ambadi Kannan) formed a group during lockdown. Calling themselves Tresspassers, they did a few murals in various places in the State and hope to do more. They also produce short films and videos.

Four artists share how the pandemic shaped their art in new and unforeseen ways
A solo ride across India with an easel
To Top
error: Content is protected !!
Top