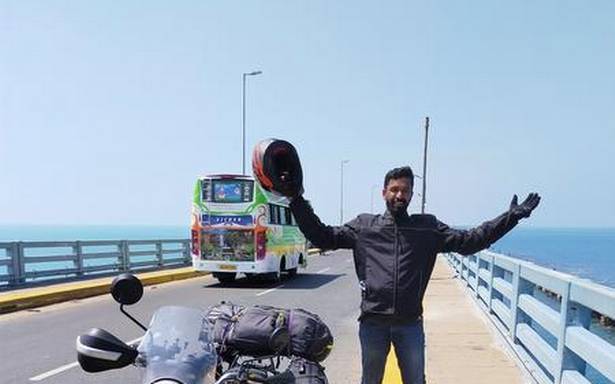 Artist Prasanth KP is painting his way across the country on a bike piled with canvases, brushes and a tripod

On March 28, artist Prasanth KP set off from Kochi on a solo ride across the country on his Royal Enfield. Eighty per cent of the luggage, piled on the back of the bike, comprised art material — easel, canvas, tripod, paint and brushes wrapped in a water-proof bag. He would be painting his way through 16 states or more over 60 days.A rider and traveller, who has undertaken solo trips across South India and travelled up to Gujarat, this is the first time he is combining art with travel. Prasanth plans to complete 100 paintings while on the journey, which would be exhibited in Bengaluru and Kochi after he completes the trip.Instead of the safe confines of a studio, Prasanth as an artist prefers the outdoors. Part of the Kochi chapter of Urban Sketchers, a global community of artists that practises drawing on location in cities, towns or villages that they live in or travel to, Prasanth has painted several parts of the city on site. An advocate of on-location painting, he wishes more artists would get into it. “It is an entirely different experience. You don’t have the comforts of your studio. It is not easy, but it is empowering,” he says. Prasanth is also part of a plein-air watercolour group, a Kochi collective of artists, who paint on location.While on the ride, he will be doing water colours on A3 paper. “It is a challenge, but I have been wanting to do this,” he says. He plans to ride through the hinterlands of the country, meet people, stop whenever he feels like, savour the sights and get to know life as it is. Visiting villages and heritage sites are part of the plan. The paintings would include landscapes, cityscapes and portraits. His first stop would be Pune along the Konkan route and from there, he plans to head to Aurangabad and later to Agra and Delhi. He will be covering Dharamshala, Leh, Srinagar, Kullu-Manali, Varanasi, Gaya, Kolkata and return down the East coast. “If possible, I will visit Nepal and Bhutan as well,” he adds.He will be largely relying on GPS, but would not hesitate to stop and ask for directions. “It is not just the vast expanses and picturesque locations that move me. Inspiration often comes from the interactions I have with people. For me, this journey will be one of self discovery,” he says. He will be meeting urban sketchers in the cities he visits as well. A vlogger, Prasanth would be documenting his journey visually on his YouTube channel. He will publish an art journal as well, of the works he does.Organising a trip such as this is an expensive affair, considering the equipment needed, the fuel and maintenance of the bike, and accommodation. He would be mostly looking at tents and hostels to stay the nights. Those who wish to support him on this journey, however, can buy any of the paintings he does while travelling. He will be posting pictures of all the paintings he would do on his instagram handle (@riderstraveldiary). The paintings would be delivered to the buyer after the exhibition, after his return.Follow Prasanth’s journey on the Riders Travel Diary YouTube channel.

A mural shows a slice of Kerala
This Korean dance-fashion show is where tradition meets modernity
To Top
error: Content is protected !!
Top